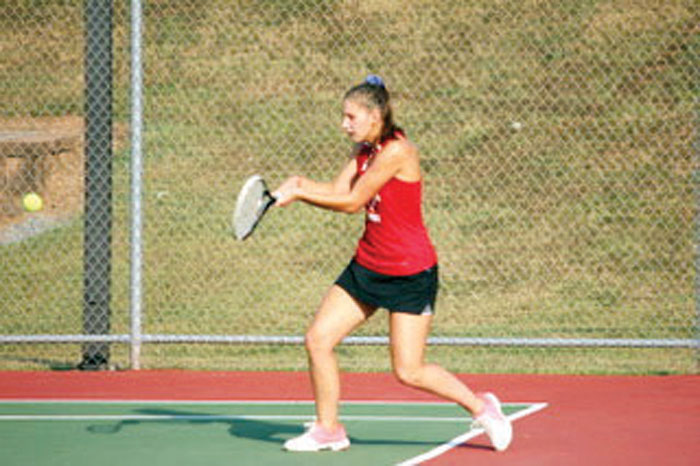 Lillie Rusher was No. 1 in singles in Salisbury’s Central Carolina Conference championship on Monday against South Rowan. 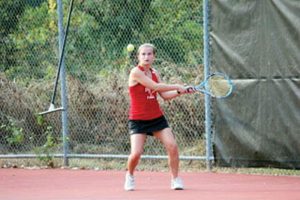 Kate Burton was No. 2 in singles in Salisbury’s Central Carolina Conference championship on Monday against South Rowan.

SALISBURY — Seventeen in a row.

“Very proud of this team,” Griffith said. “I’m impressed by the fact that they are very young, but play so hard. We’ve had injuries we’ve had to get through, but we’re deep, and right now we’ve got a lot of girls playing well.”

ADs voted in a major format change in the Central Carolina Conference this season, with teams playing each other only once, instead of home-and-home. That basically meant two-game weeks instead of three-game weeks. It explains why Salisbury is “only” 12-0 this year, instead of 20-0.

Salisbury experienced a stressful match this season. That was at CCC opponent Oak Grove, which stopped Salisbury’s 186-match CCC winning streak in 2018 and was undefeated this season when it took on the Hornets. That match was suspended by darkness on Monday, Sept. 16, and completed on Thursday, Sept. 20. Burton and Chmiel both lost their first sets, but came back to win the second set and third-set tiebreakers. The Hornets took a 4-2 lead after singles All the doubles matches were tight, but the Hornets were able to win at No. 1 (Rusher/Thurman) and No. 2 (the Burtons) to take a 6-3 victory.

“That was a good match — Oak Grove has an excellent team,” Griffith said. “Lillie Rusher was something that day and she played a phenomenal match at No. 1 and beat a girl (Jessica Fuchs), who was conference champion and state singles runner-up last year. That was big. Seventeen championships in a row by any team in any sport is an amazing accomplishment.”

Rusher focused on club soccer last fall, but she has returned to the courts to give the Hornets a lift. She and Meredith Burton played No. 4 and No. 5, respectively, on Salisbury’s 2017 state-championship team that had players such as Maria Capito, Julia Honeycutt, Emma Nianouris and Bethanie Stauffer.

Salisbury faced a challenging non-conference match against 3A Concord early this season and won 5-4.

Other than Concord and Oak Grove, the Hornets have won their matches with relative ease.

Chmiel hasn’t lost yet at No. 5, while Kate Burton is perfect at No. 6.

Four of the Hornets’ top six — Meredith Burton, Thurman, Campion and Chmiel — were in the rotation for Griffith’s 2018 team that lost in the third round of the playoffs.

Griffith is optimistic the current team can make another run.

Postseason arrives for tennis before the other fall sports.

The CCC tournament, which determines singles and doubles representatives for the individual regional tournament, is the next major event for the Hornets and will be played at Lexington.

After that, Salisbury will be the host for individual regionals (Oct. 18-19) that determine state tournament representatives.

The brackets for the dual team state playoffs will be released by the NCHSAA on Oct. 14, with the first round set for Oct. 16.