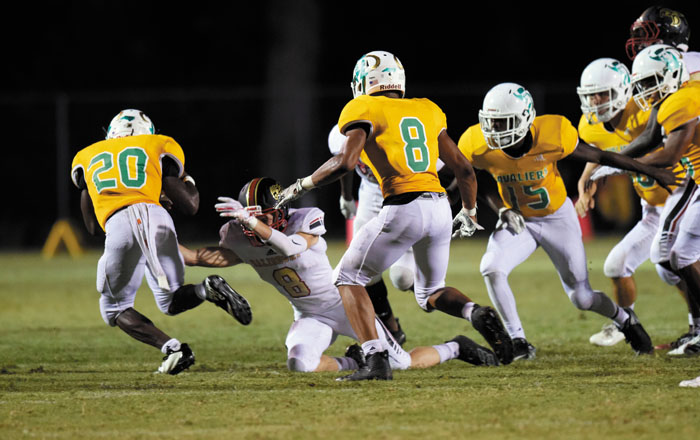 Wayne Hinshaw / for the Salisbury Post North Rowan’s Zay Davis (20) picks up a fumble and runs for a touchdown during a game against Salisbury earlier this season.

SPENCER — It’s hard for another defense in the county to climb out of the shadows when Salisbury keeps shutting out people, but North Rowan is taking its best shot.

The Cavaliers logged their first shutout on Friday by blanking North Moore 39-0 in a lightning-shortened Yadkin Valley Conference opener.

Not only did North defenders put up a zero, they scored two touchdowns and a safety. They had four sacks. That’s not a bad night’s work.

“One of the things we challenged our defensive guys to do was to score,” North head coach Ben Hampton said. “They went out there and got two pick-sixes.”

While both picks were made by junior DBs, there’s a huge difference in their experience level. Scott is a new face in the secondary, while Davis seemingly has been around long enough to be on the coaching staff. He’s been the starter at strong safety since the was a freshman.

“We’ve known he’d be a special athlete since we watched him playing at North Rowan Middle,” Hampton said. “Besides excelling in basketball and football, he was a wrestling champion.”

“That’s true, I was 17-0 in wrestling,” Davis said. “But wrestling and basketball high school seasons are at the same time, so it’s hard to do both. Maybe I can wrestle enough to qualify for the regional this year. We’ll see what happens.”

Davis plays football at 160, so he’d probably wrestle at 152, but he is not someone anyone in their right mind would want to get on a mat with. The veins in his arms bulge like a body builder’s. His body fat is minimal. He has an iron grip. When he shakes your hand, your sore fingers know they’ve been shook. They sting for a while.

North’s defensive goals start with being fast and physical, and Davis is both of those things. He’s explosive — and then some.

“He flies around,” Hampton said. “We make our share of mistakes on defense, but our hope is that if we’re fast enough and physical enough we’ll cover up most of the mistakes. Zay can be loud and he can be emotional. Our job is to make sure he channels his emotions in the right way.”

Davis sustained a shoulder injury against West Rowan in Week 2. That caused him to miss the Lexington game (a surprising North Rowan loss), but he returned to action against Carson and was back to full strength against East Rowan, a comeback road victory that might have turned around the season for the Cavaliers, who are now 3-3 after an 0-3 start.

Davis was destructive on Friday.

He blew up a half-dozens runs as North Moore was held to 5 net rushing yards on 22 attempts. North Moore completed six passes, but for only 15 yards. Davis  sprinted across the field to chase down the QB  on one scramble and smashed him near the sideline.

Davis is a fearless punt returner, and punts in his direction can turn into adventures. He’ll catch the ball over his shoulder. He’ll catch it while leaping for a high bounce. He’ll pick it up and take off even if the ball has stopped rolling if defenders aren’t alert,

Not many people are going to tackle Davis in space one-on-one. And once he has a head of steam, he can run through a lot of people. There have been punt returns where he’s still been going forward with six defenders hanging on.

Davis scored as a freshman against North Moore on a blocked punt. He had a kickoff return touchdown against Salisbury as a sophomore and he scored again this year against the Hornets on a fumble on a punt return. He’s had countless TDs called back by penalty flags over the years, but he finally got his first pick-six and fourth career TD on Friday.

“I was planning on getting a pick,” Davis said. “The first pass they threw into my area I almost got there, but I just knocked the ball out of the receiver’s hands. The next time I was ready. As soon as the quarterback turned his shoulders, I knew it was coming my way and got a  good break on it. Once I caught it (at the North Moore 25), it was a pretty easy touchdown. They weren’t going to catch me.”

Davis is good enough with a ball in his hands that Hampton is constantly tempted to use on a regular basis on offense.

But so far it’s just been for a play here and there. He had one carry Friday — for 28 yards.

“He means so much to our defense that it’s hard to take him and put him on offense, too,” Hampton said. “You play him both ways and it doubles the chance of something going wrong. We don’t want to get him hurt.”

The late Russell Davis, Salisbury High’s leading tackler in 2006, a guy with a non-stop motor and an all-county linebacker, was Zay’s older brother.  He died in 2015.

Another of Davis’ older brothers, Trae Clark, turned in  a monumental game late in the 2012 season for North Rowan.

In a 74-0 rout of South Davidson, Clark, a strong safety, scored three touchdowns on an interception return, a fumble return (he stole the ball out of a back’s hands) and a kickoff return. Clark was also North’s kicker and accounted for eight extra points that night for a 26-point performance.

“Russell wore the 20 jersey for Salisbury and Trae wore it for North,” Davis said. “Now I wear that 20. It’s my turn to do my part.”

The successor to Zay is in place. Freshman linebacker Khalil Davis, Zay’s little brother, already is doing good things for North’s varsity. He wears 17 now, but one day he’ll probably put on the 20 jersey.

North’s offensive line is still a work in progress and North is still trying t0 get Malcolm Wilson rolling the way he can roll, but QB Kyree Sims is getting more comfortable every game. This looks like a team with a future.

As the offense gets better, the Cavaliers know they can rely on their defense.

“We’ve got some really special kids on defense,” Hampton said.  “We’ve got guys that we know we can count on when the lights come on every Friday.”

One of those when-the-lights-come-on guys is Davis.

“There’s still some pain in my shoulder,” Davis said. “But once the game starts, that pain goes right out the window.”

North Rowan has a big one against YYC contender South Stanly at home on Friday.