Dodgers healing up ahead of NLDS vs Nationals 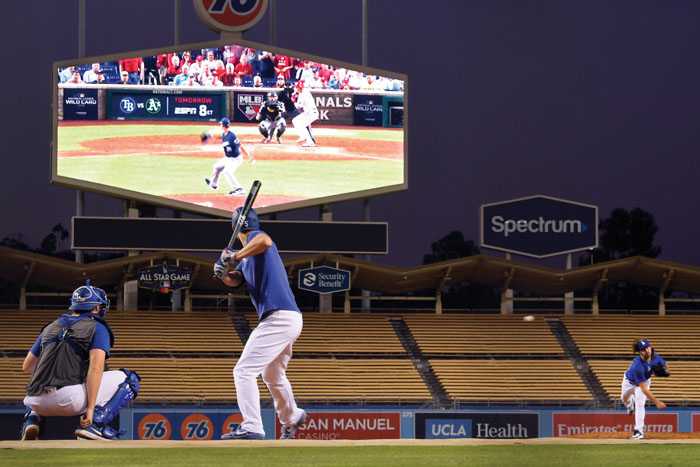 Los Angeles Dodgers pitcher Tony Gonsolin, right, pitches to Corey Seager, as Austin Barnes catches during practice as they wait to find out who they will play in Game 1 of a National League division series baseball game, Tuesday, Oct. 1, 2019, in Los Angeles. (AP Photo/Mark J. Terrill)

By BETH HARRIS AP Sports Writer
LOS ANGELES (AP) — Nagging injuries to Justin Turner, Rich Hill and Joe Kelly have improved enough that all three will be available when the Los Angeles Dodgers open the National League Division Series.
Manager Dave Roberts didn’t reveal his roster Tuesday for the best-of-five playoff that begins Thursday at Dodger Stadium against the Washington Nationals. And he didn’t announce a Game 1 starter, either.
But Roberts confirmed that two of the Dodgers’ talented rookies — catcher Will Smith and second baseman Gavin Lux — will be active.
Los Angeles worked out Thursday while the NL wild-card game between the Nationals and Milwaukee Brewers played on the stadium’s videoboards. The Dodgers wrapped up before the Nationals rallied to win 4-3.
Turner took some swings against Tony Gonsolin in a simulated game. The third baseman has started just three games since Sept. 7. He initially had a sprained left ankle, then a sore back that kept him out of the final five games of the regular season.
Hill was the only starter confirmed by Roberts, and the 39-year-old left-hander will go in Game 4 on the road, if necessary. He would pitch four innings.
Hill has struggled with injuries to his forearm and left knee.
Kelly threw a 20-pitch bullpen during the workout. The reliever has had an unspecified injury that’s limited him to throwing six pitches in the last two weeks.
“I got the thumbs-up from him,” Roberts said. “He’ll be ready to go on Thursday in whatever role.”
___
More AP baseball: https://apnews.com/MLB and https://twitter.com/AP_Sports