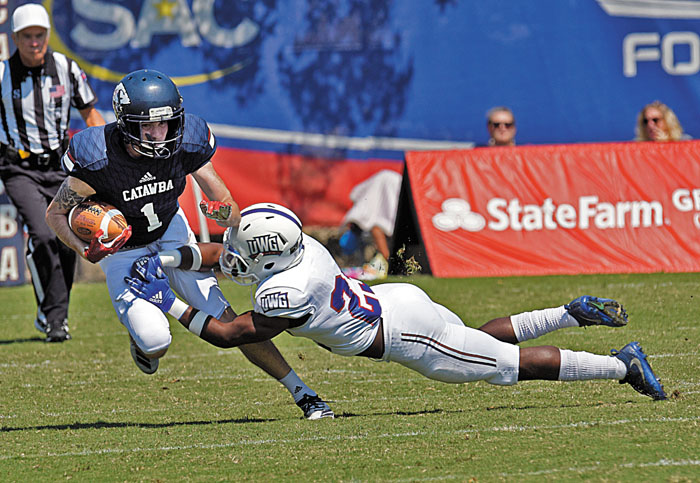 SALISBURY — Catawba’s 13-10 South Atlantic Conference loss to Wingate on Saturday was a soul-crusher, but there were plenty of positives as the Indians (1-3, 0-1) seek to move forward.

There were bright spots.  There was the continued solid play of quarterback Kendall Davis, who entered the season as the projected backup. There was a confidence-building game for free safety Brenden Westbrook, the local kid (Carson) who made 16 tackles. There was another brilliant game by corner Cris Page, who has to be one of the best in the region. There also was a strong game, a long-awaited one, for receiver Gavin Rose, who had four catches for 91 yards and Catawba’s only touchdown.

Catawba coaches had watched enough film of Wingate’s defense to know there was a chance to hit an early home run with a “sluggo” route.

“Sluggo” comes from slant-and-go. It’s a double move. The receiver sells the slant. The DB covering him breaks on the pass that he is sure is coming, only to find, much to his chagrin, that the receiver is no longer slanting, and is instead cutting straight up the field behind him.

Dallas’ Amari Cooper and Seattle’s Tyler Lockett are among the NFL receivers noted for their ability to execute the “sluggo.”  Catawba doesn’t have Cooper or Lockett, so it had to find its own version, someone with both the acting chops to fool the defense and the speed to make it a big play.

“We held auditions,” Walker said. “We knew we had an opportunity, but we had to sell that first slant. We had to have a guy who could run the route properly.”

Rose was chosen as the “sluggo” man. He seemed an unlikely candidate in some respects. While no one questions his experience (he’s a 23-year-old, fifth-year senior) or his wheels (he can run the 40 in 4.47 seconds), Rose’s career has mostly fallen into the what-might-have-been category.

While he’s snagged passes and returned kicks off and on for Catawba since 2015, Rose’s career totals prior to Saturday were modest — 27 catches for 267 yards and one touchdown. That lone TD had come on a pass from Patrick O’Brien more than two years earlier against UNC Pembroke.

Rose was sidelined all of 2016, which became a redshirt year, and missed so much of 2018 that he was never a factor.

“A lot of setbacks, two hamstring injuries,” Rose said. “Last spring, I started to feel good again. I spent the offseason focusing on injury-prevention workouts to keep the hamstrings healthy.”

While Rose isn’t large (5-10, 170), when he’s 100 percent, he’s one of the elite athletes on Catawba’s team. Growing up in Winter Park, Fla., he looked up to a father (Mark), who was a trainer and track and field guru, and a brother (James) who was a walk-on receiver at University of Central Florida.

“My brother was seven years older, but as a kid, I always tried to hang out with him and his friends, played lots of backyard football with no pads,” Rose said. “It toughened me up.”

As a high school athlete, Rose caught his share of passes, but he was Winter Park High’s male athlete of the year in large part because of his speed  and explosiveness.  In track and field, he was a state finalist in the 4×100, 110 hurdles and long jump.

Rose also developed into a standout decathlete in high school. His size was a disadvantage in the throws, but he excelled in the running events, especially the hurdles. In the 2014 AAU Junior Olympic Games held at Drake University following his junior year of high school, Rose placed sixth in the decathlon.

Catawba came into the picture when it unsuccessfully tried to recruit one of Rose’s high school football teammates. That’s when the Indians encountered Rose for the first time. They watched his film. That led to a visit, a commitment and his signature on National Signing Day in February, 2015.

There were major expectations, but balky hamstrings proved to be an issue. And for a racehorse like Rose, hamstrings are everything.

Wingate drove and scored as it soon as it got the ball on Saturday for a 7-0 lead. Catawba needed to answer. Everyone on the Catawba sideline knew the “sluggo” was coming soon.

Facing third-and-7 from the Wingate 25, it was time.

“We’d practiced the play all week, over and over,” Rose said. “The slant-and-go was going to work and we knew it. Wingate’s defensive backs are trigger-happy. I just had to sell that first move, and he was going to bite hard on it.”

The DB bit. Davis made the throw. Rose made the catch. Catawba had more than a first down, it owned a 25-yard touchdown.

That was the play for which Rose had practiced diligently all week, but he wasn’t done.

Late in the third quarter, Rose made another terrific play, a third-down catch for 46 yards that set up Catawba’s field goal that tied the game at 10-all.

“On that one, the DB was playing 10 yards off me, so I ran right at him, tried to step on his toes, and then broke outside of him and took off,” Rose said. “K.D. made the throw and I was able to go up and get it.”

Better late than never for Rose.

“We’re glad Rose played the way he did,” Walker said. “Not just the touchdown, but other big catches. He played like we’ve been expecting him to play. He was our primary receiver on Saturday, and he hasn’t been in that role before.”

Rose expects a lot from himself. He’s optimistic that this is the start of an exciting final act before the curtain falls and he sprints out of football and into the business world.

“It felt good to have a breakout game,” Rose said. “It was a long time in coming, but I’m hoping to have a few more like it.”

A preview of that game will be online later this week.