Mother who lost child to cancer brings awareness of disease 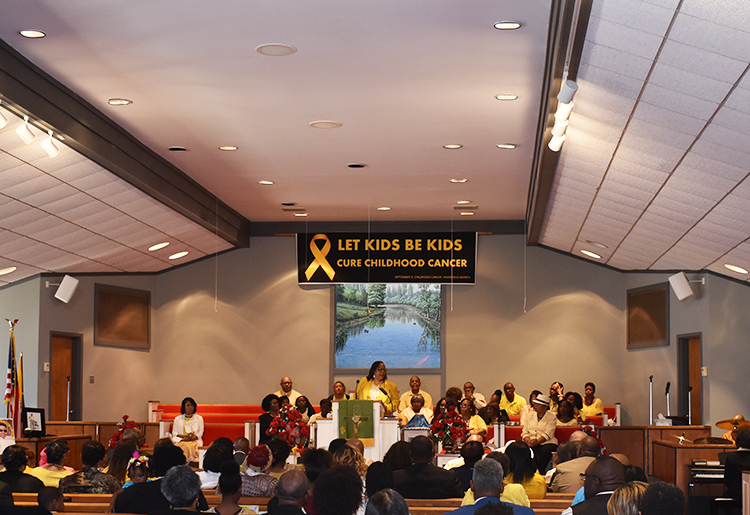 Wendy Baskins shares the story of her son Stephen Gilmore who died of cancer at age 19 after a lifetime battle at Gethsemane Missionary Baptist Church Sunday.

SALISBURY — Members of Gethsemane Missionary Baptist Church wore gold ribbons Sunday morning to celebrate kids who have survived childhood cancer and remember those who lost their lives to the disease.

Wendy Baskins lost her son, Stephen Gilmore, on Valentine’s Day in 2016. Stephen was diagnosed with medulloblastoma, the most common type of childhood brain cancer, at age 3.

Stephen was taken to Brenner Children’s Hospital after a brain tumor was discovered at Novant Health Rowan Medical Center. Baskins said she didn’t know a kid could have cancer.

At Brenner, Stephen underwent surgery to remove the malignant brain tumor. The doctor told her the surgery was successful.

“I went, ‘What is malignant?’ He says, ‘He has cancer,’” Baskins said. “That was just the beginning of our journey.”

Baskins said she had hope knowing God was there.

“In that dark, dark waiting room, all I saw was a light over my son,” Baskins said. “That’s all that I saw. I knew then that God was with me.”

Stephen kept going, Baskins said, becoming “the face of survivorship.” Baskins created a Facebook group called “Parents of Children With Medulloblastoma” to connect families that were battling childhood cancer. It now has 3,000 members. She calls her son “this little light of mine.”

The battle wasn’t over for Stephen. Twelve years after his first cancer diagnosis, he was at Baskins’ parents’ house when he doubled over in pain. He was diagnosed with colon cancer at 15 years old.

He fought the disease and, a year later, Baskins described their life as “living and thriving.”

But then he was diagnosed again with colon cancer, which damaged his intestines and stomach.

“He did what Stephen does — he put his faith in God,” Baskins said.

She said her son led her through his faith.

Baskins passed on the message: “Never, ever give up.”

“Until we have a cure, we have to continue to educate the community and support the families,” she said. “I appreciated Gethsemane Missionary Baptist Church. This is your second year of celebrating Gold Sunday, and this is just an overwhelming support of the Roseborough family.”

Dakota Roseborough was diagnosed with brain cancer at 10 years old in 2015. And he beat cancer.

Baskins saw the need of supporting families going through childhood cancer and started Stephen’s Purpose. The nonprofit group reaches out to families after diagnoses and provides gas cards, parking passes and emotional support. She also advocates for legislators to support childhood cancer research.