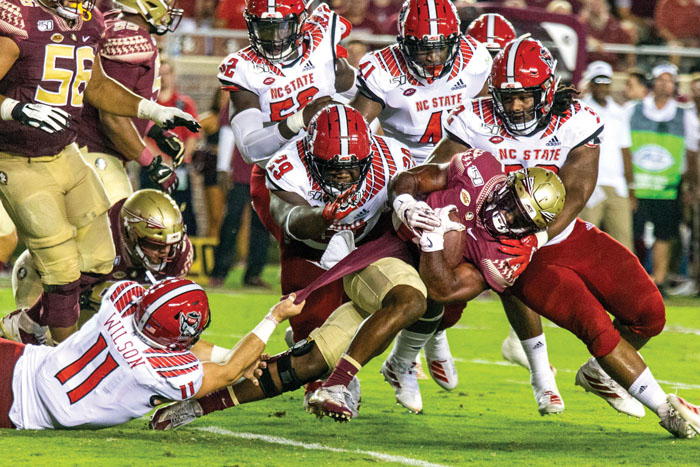 By BOB FERRANTE Associated Press
TALLAHASSEE, Fla. (AP) — Graduate transfer Alex Hornibrook made his first start at Florida State, throwing for a career-high 316 yards and tossing three touchdown passes in the Seminoles’ 31-13 win over North Carolina State on Saturday night.
Hornibrook was often pressured and was sacked eight times but he completed 29 of 40 passes and had two touchdown passes to Tamorrion Terry and another to Ontaria Wilson for Florida State (3-2, 2-1 Atlantic Coast Conference). He was starting in place of James Blackman (knee).
Bailey Hockman, who transferred from FSU to a junior college in August 2018 and later signed with NC State, played the majority of the game. He completed 21 of 40 passes for 208 yards and had a fourth-quarter touchdown pass to Emeka Emezie for the Wolfpack (3-2, 0-1).
NC State had more sacks (eight) than points (six) through three quarters. Defensive tackle Darrell Murchison had 3.5 sacks.
FSU outside linebacker Janarius Robinson was ejected for targeting after a booth review.
Ricky Person Jr. was carted off with 13:28 left in the third quarter. The sophomore tailback had his left leg in an air cast.
UP NEXT
NC State has an open week. The Wolfpack host Syracuse on Oct. 10.
Florida State has an open week. The Seminoles travel to No. 1 Clemson on Oct. 12.