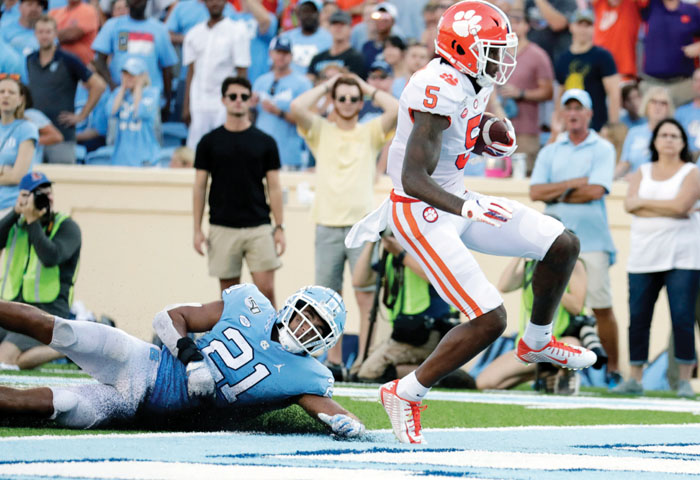 CHAPEL HILL (AP) — The ball sat on the 3-yard line, forcing top-ranked Clemson into the most unexpected of positions.

Get a stop, or lose the lead late against heavy underdog North Carolina — and maybe the game along with its spot as the front-runner for the College Football Playoff.

The Tigers did it, stuffing the Tar Heels’ 2-point conversion attempt with 1:17 left to hold on for a 21-20 victory — narrowly avoiding an upset that would’ve shaken the national landscape in college football.

“It came down to one play, that’s what happens a lot of times,” Clemson coach Dabo Swinney said. “We made the play we had to make to win the game.”

The Tigers (5-0, 3-0 Atlantic Coast Conference) had trouble all day in trying to extend earn a program-record 20th straight win. They didn’t go ahead for good until Trevor Lawrence hit Tee Higgins on a 38-yard touchdown pass with 9:54 left, then came up with the stop after the Tar Heels went for the lead instead of a tie after Javonte Williams’ short scoring run.

The Tigers strung out Sam Howell’s option run to the right, with Xavier Thomas, James Skalski and Nolan Turner combining to bring down Howell as he turned toward the goal line.

Howell tried to pitch the ball back to Dazz Newsome as he was going down, but Newsome had nowhere to go near the sideline and was pushed out of bounds to put the Tar Heels (2-3, 1-1) short and effectively clinch the win for Clemson — though it was far tougher than expected for the 27-point road favorite on what Swinney called “a tough day at the office, no doubt.”

“I’d probably say they probably outplayed us,” Swinney said. “We made a lot of mistakes, a lot of critical, critical errors at critical times. But when we had to make a play, we made it. That’s what winners do.”

The Tar Heels certainly gave themselves a shot, jumping on Clemson with a game-opening TD drive for a 7-0 lead — the Tigers largest deficit of the season — and holding the Tigers to a season-low 331 total yards.

It was Clemson’s lowest point total of its 20-game winning streak, which includes last year’s 15-0 run to a fourth straight ACC title and second national championship in three seasons.

Yet the Tar Heels fell to 0-10 against No. 1-ranked teams in The Associated Press college football poll.

“I told the players that we’re not into moral victories,” UNC coach Mack Brown said. “That can’t happen, because you’ve got to learn to win. . I told them in my 31 years of coaching, I’ve never been prouder of their effort, because if I’m a reflection of the way those guys fought tonight, then I’m very, very proud of that.”

Clemson: The Tigers had made everything look easy through the opening month of the schedule. The closest call had been a 24-10 win against a ranked Texas A&M team that didn’t reach the end zone in until the final seconds of a game long since decided. But Clemson had all kinds of trouble getting going Saturday, from Travis Etienne’s first-half fumble to set up a UNC touchdown to multiple false-start penalties that continued undercutting the Tigers’ attempts to build momentum.  In the end, the Tigers did just enough to stay unbeaten and avoid a shocking upset.

“We know it’s hard to win,” Lawrence said. “Sometimes it’s easy to forget that when you win so many games by so many points. This game is only going to make us better.”

North Carolina: The Tar Heels have lost three straight after a 2-0 start in Mack Brown’s return to the program he led more than two decades ago. Their first four games came down to the final drives to make them a tested bunch, and this one unexpectedly followed suit. The defense hung in against the Tigers’ high-powered offense and made Clemson work for everything, while the offense did just enough to stay close before coming up with a 16-play TD drive spanning 8 1/2 minutes to put them on the brink of a historic win.

The Tigers have been an overwhelming choice at No. 1 in the AP Top 25, claiming 55 first-place votes in this week’s poll compared to just six for No. 2 Alabama and one for No. 3 Georgia. That support could ebb a bit considering Clemson’s struggles to beat a program that had gone 2-14 in the ACC over the previous two seasons.

Williams’ TD run gave North Carolina the choice of playing for the tie and overtime or taking the chance that the Tar Heels could get those 3 yards for the 2-point conversion.

Yet the Tigers also knew the Tar Heels were likely to try it if they scored, and Swinney said his coaching staff even expected some type of option call.

“We knew the speed option was a play they liked,” said Skalski, one of the three defenders to pull down Howell. “That’s the key we got and that’s what we read, and … we made a play.”

Howell was hit shortly after turning inside the 5 as he ran to the right with Newsome following.

“It’s just a play we’re very confident in,” Howell said. “In my opinion, it was a good play call. That’s something we liked against them, and they just made a good play on defense.”

Clemson: The Tigers have an open date next weekend followed by a visit from Florida State on Oct. 12.