Panthers’ Newton says he needs ‘time away from game’ to heal 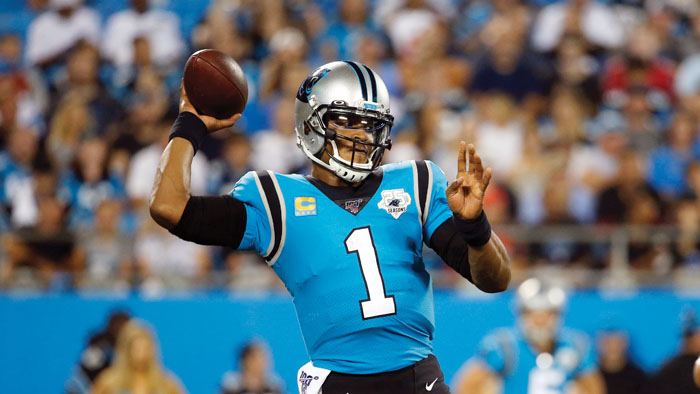 CHARLOTTE (AP) — Panthers quarterback Cam Newton said he plans on taking “time away from the game” because of a mid-foot sprain that has bothered him since the third preseason game.
Newton says in a 15-minute video blog released Friday night that he probably shouldn’t have tried to play through the injury and needs to give himself time to heal.
“It could very well be a week. Or two weeks. It could be three weeks, it could be four weeks, it could be six weeks,” Newton said in the video in which he was smoking a cigar and drinking a glass of wine. “But I have to understand and know if it takes that time I trust in this team that they will, we will, still be in a great situation by the time I get back.”
Kyle Allen has replaced Newton in the starting lineup and led Carolina to a 38-20 win over Arizona last Sunday. Allen will start against the Texans on Sunday.
Newton says when he was warming up for the Sept. 8 season opener against the Rams his foot did not feel right.
But he decided to play anyway.
“I was hiding an injury where I could have easily said, ‘You know what coach, I don’t think I’m ready. Maybe I need to kind of consider sitting this one out for the betterment” of the team, Newton said. “… Automatically, I thought, ‘I’ve got to play Week 1. I can’t let my fans down. I’ve got to be there for my team.'”
Newton is the NFL’s third-leading career rusher among quarterbacks, but has run the ball just five times for minus-2 yards in his first two starts.
With the Panthers facing a crucial fourth-and-1 at the Tampa Bay 2 in Week 2, coordinator Norv Turner called a play for Christian McCaffrey instead of Newton. McCaffrey was stopped short of the first down and immediately questions about Newton’s foot arose.
After the game coach Ron Rivera told reporters “don’t worry about the foot.”
However, Newton hasn’t practice since that 20-14 loss to the Bucs.
“Even if somebody is not close to you, you’re trying to guard your foot,” Newton said. “I don’t want nobody to touch it, I don’t want nobody to sack me. So all these things are going on in my head in actual play. For so long I played this game one way, I played this game the only way I know how to play. And at this particular time, that No. 1 (his jersey number) that’s out there, that hasn’t been that same person.”
Newton said it “rejuvenated” him when the Panthers shut him down in Week 3.
“It takes the ‘Superman’ out of it,” Newton said referring to nickname he has become known for. “I really didn’t want that mantra to be there. You feel like you’re immortal. You feel you can’t do no wrong. You feel like you’re this big, bad guy but truth be told, I’m human. Through this whole time, I’m realizing this.”
___
More AP NFL: https://apnews.com/NFL and https://twitter.com/AP_NFL