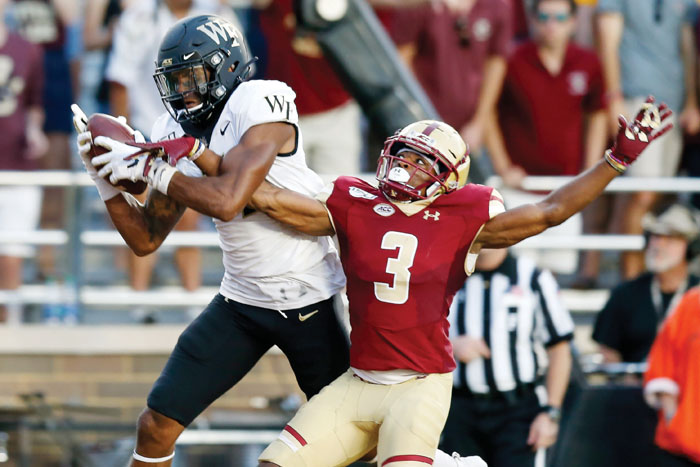 Boy, did they do that impressively.

“Every week with our football team we come up with a big three for each side of the ball,” Clawson said. “On offense this week, one of the big three was third-down conversions — that we have to stay on the field against this group.”

Clinging to a three-point lead early in the fourth quarter, Newman lofted a 27-yard TD to Scotty Washington, who made a leaping grab over Jason Maitre to make it 27-17.

“We told our guys earlier in the week this is going to a be a four-quarter, one-score game,” Clawson said.

BC then sliced it to 27-24 when Bailey hit tight end Chris Garrison with a 16-yard scoring toss with just under seven minutes left.

But the Demon Deacons converted a couple more third downs before punting the ball back in the closing seconds.

Trailing 20-17, BC was lining up for a 43-yard field attempt when it was whistled for a delay of game as Aaron Boumerhi booted it through the uprights. Then, on the next attempt, the Eagles bounced the snap before holder Dennis Grosel threw an incomplete pass deep.

The teams were tied 17-all at halftime.

On BC’s first possession of the second half, Addazio passed on a field goal opportunity on a fourth-and-3 at the Wake Forest 21 and Brown’s pass was picked off by Amari Henderson — his second of the game.

“Our analytics said to go for it there,” Addazio said.

The Demon Deacons then marched 78 yards in a school record-tying drive of 20 plays, converting four third downs, before Nick Sciba kicked his second 22-yard field goal of the game, making it 20-17.

Brown hit Bailey with a 4-yard scoring toss on a shovel pass to tie it with 41 seconds left before halftime.

It gave him a TD reception for a school-record seventh straight game.

Boston Celtics center Enes Kanter helped fire up the crowd by throwing T-shirts into the BC student section.

Entering the day, Wake Forest was just outside The AP Top 25. With a loss by a school in the lower portion of the poll, the Demon Deacons will likely find themselves inside.

Wake Forest: The last time the Demon Deacons opened 5-0 they went to the Orange Bowl in 2007. The win gave them seven straight, including the last two last year to match a 75-year old school record.

Boston College: The season only gets tougher for the Eagles, who have to play five of their last seven on the road.

Wake Forest: Off next week. Hosts Louisville on Oct. 12.

Boston College: At Louisville next Saturday.

APP STATE PULLS AWAY FROM COASTAL, 56-37, AFTER DELAY

The Mountaineers (4-0) scored two touchdowns late in the first half to open a 35-21 lead and the Chanticleers (3-2) never recovered after giving up the first score of the second half.

The game was delayed by lightning for two hours late in first quarter. Shortly after play resumed Coastal Carolina scored to tie the game at 14. They swapped touchdowns after that before Williams scored on a 1-yard plunge to cap a quick 77-yard drive for a 28-21 lead with 1:59 to play. Then good coverage and a forced fumble pinned Coastal Carolina at its 3. A quick three-and-out, a short punt with a 12-yard return set up the Mountaineers They scored in three plays, using just 36 seconds for the halftime lead.

The balanced Mountaineers had 239 yards of offense with Thomas going 19 of 23 for 246 yards.

Fred Payton threw for 240 yards and two touchdowns and ran for two more for Coastal Carolina, which had 393 yards.