Livingstone moves to 4-0 with road win at Lincoln 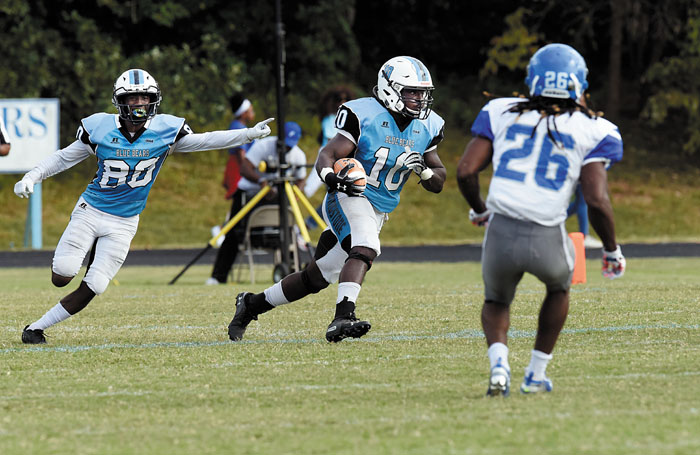 Livingstone's Raheem Coxfield (10), shown returning a kickoff against Elizabeth City State on Sept. 14. Coxfield also had a big return on Saturday, during a 35-19 win over Lincoln (Pa.). File photo by Wayne Hinshaw, for the Salisbury Post

With the victory, Livingstone has started the season 4-0 for the first time since 2014. That season, the Blue Bears won just once more, finishing 5-5.

“In the second half, we looked like the team we saw in practice last week,” said Livingstone coach Daryl Williams. “Even though we led at halftime, I didn’t think we played particularly well in the first half. We left some points on the field.

“We put together some good drives in the second half and the defense held up pretty well,” Williams continued. “But we’re happy to get the win and get out there without any major injuries. We can move on now to next week.”

The contest was the first CIAA game for each team and it was an important win for Livingstone, against the 0-4 Lions. With league Northern Division power Virginia Union visiting Livingstone next week, the schedule turns stronger.

After the VUU game at Alumni Memorial Stadium next Saturday, the Blue Bears head into the five-game stretch against their Southern Division rivals.

“Virginia Union will be a great test for us as we get ready to go into the Southern Division games,” added Williams. “I told the team I was proud of their effort today (Saturday), but I challenged them to respond next week against a team as big as we are, as fast as are and one that has had more success in recent years than we have. I look forward to seeing how we respond next week.”

Yesterday, the Blue Bears started quickly as linebacker Raheem Coxfield, playing on special teams, returned the opening kickoff 68 yards to the Lions’ 8-yard line. On the first play from scrimmage, senior running back Andrew Faraimo was in the end zone, just 19 seconds into the game.

Another first-quarter possession saw the Blue Bears reach the Lincoln 25-yard line, facing a 4th-and-3 situation. Coach Williams went to the halfback pass — DJ Bethune connected with the other twin, Anthony Faraimo, for 20 yards and a first down at the 5-yard line. Two plays later, Tyrell Baldwin punched it in from the 2-yard line and Livingstone had a two-score lead as the opening period ended.

However, after a solid stop by the LC defense, the Blue Bears’ offense had a bad series, getting Lincoln back into the game.

On third down from his own 16-yard line, Livingstone back-up quarterback Xavier Longerbeam was tagged with an intentional grounding penalty and punter Antoine Akundu had to punt from his own end zone. It didn’t go well. Akundu’s punt was blocked and recovered for a touchdown by Sadique Moore, making it 14-7, early in the second quarter.

The Blue Bears once again took a two-score lead, at 21-7, when Longerbeam engineered a long drive that appeared to stall at the Lincoln 37. However, instead of punting, Longerbeam passed to receiver Anthony Brown, who went 35 yards to the Lions’ 2-yard line. Longerbeam, suffering from cramps, and starting QB Miles Hayes came in and scored on a two-yard sneak.

Freshman kicker Josue Gomez, in his first start, booted all three extra points during the first half.

Livingstone’s halftime led was 21-13, after yielding a big play to the Lions, late in the second period. Lions’ QB Eban Jackson completed a 44-yard pass to Shoye Sampson and Lincoln was in business at the LC 5. Two plays later, Jackson scored himself, but the PAT was missed by kicker Cole Klubek.

Lincoln actually out-gained the Blue Bears in the first half  (166-151), but Livingstone had several short fields to work with.

In the third quarter, with Hayes back at quarterback, Livingstone went on an 11-play, 78-yard drive, ending with Brown scoring again. Hayes hit Brown with an 8-yard TD pass. A key play on the drive was Hayes connecting with receiver Deandre Vickers for a 17-yard gain to the Lincoln 38. Gomez’ kick was blocked by Samuel Jordan and the Blue Bears led, 27-13, at the 3:10-mark.

Livingstone’s defense got the ball right back and Hayes threw his second touchdown pass on the day, this one for 18 yards to receiver Jordan Cartwright. Ryan Williams then ran for two points, pushing the Blue Bears’ lead to 35-13, with 14:44 left in the contest.

The Lions’ first possession of the final period saw them march 73 yards in eight plays for a touchdown. Jackson scored on a 2-yard plunge, making score 35-19, but Livingstone stopped the two-point conversion attempt.

The teams punted back and forth for the rest of the game, until Lincoln’s last-gasp drive. That march was halted on fourth down as Livingstone linebacker/safety Ian Tyler sacked Jackson with 1:22 left, essentially ending the contest.

NOTE:  Livingstone defensive end Gibson Ziah had two sacks against Lincoln while Tyler had an interception to go along with his sack. … Williams added the the team “embraced the trip to Lincoln, visiting Baltimore on Friday. “They were able to relax and bond together as a team,” he said. … Livingstone’s first two home games had 4 p.m. kickoffs, but next Saturday, the Blue Bears and Virginia Union will start at 1 p.m. — for Youth Community Day.