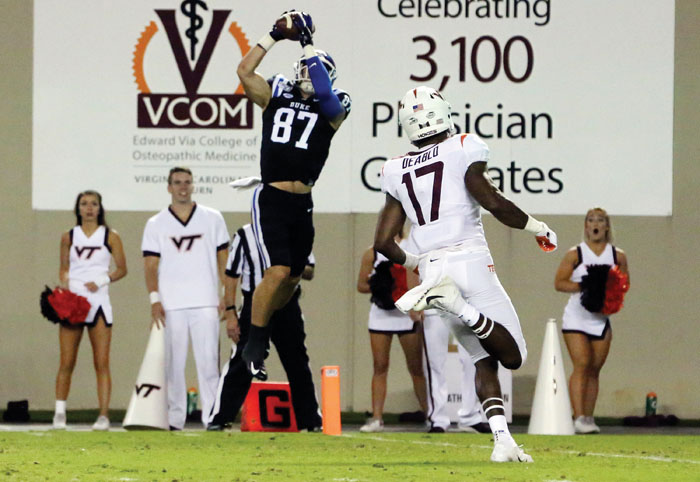 By HANK KURZ Jr. AP Sports Writer
BLACKSBURG, Va. (AP) — A first-quarter defensive battle left Duke and Virginia Tech looking for something to kick-start their offense.
The Blue Devils got the break they needed early in the second quarter, while the struggling Hokies never did.
Quentin Harris threw for two touchdowns and ran for another and Duke beat Virginia Tech 45-10 on Friday night.
The Blue Devils managed 5 yards on offense in the first quarter but got their break when Hendon Hooker, on his second play at quarterback for the Hokies, tried to hand the ball to Keshawn King but it never got there. The fumble resulted in a 24-yard loss to the Hokies 16 and on the next play, Harris hit a wide-open Noah Gray for the touchdown.
“We really wanted to capitalize on that and get a score,” Harris said. “I thought we had a great play call.”
Hokies coach Justin Fuente downplayed the importance of the momentum swing because it came so early in the game and gave the Blue Devils just a 7-3 lead, but defensive coordinator Bud Foster was not as quick to dismiss it.
“It seemed like that turnover and then the next play took the wind right out of everything,” he said.
Harris hit Gray from a yard out for the second score, and Duke (3-1, 1-0 Atlantic Coast Conference) made it 21-3 on a 25-yard trick play on which Harris lateraled to Jalon Calhoun, who hit a wide-open Deon Jackson, capping a 91-yard drive just 39 seconds before halftime.
Harris added a 42-yard scoring run and Jackson had a 32-yarder early in the fourth quarter, sending fans pouring out of Lane Stadium.
“Obviously we’re not ready,” said Fuente, whose team, like Duke’s was coming back from a bye week. “We’re not at the point where we can compete and play and have a chance to win against that team we played tonight.”
The Hokies (2-2, 0-2) got their only touchdown on a 72-yard connection from Ryan Willis to Damon Hazleton after they fell behind 31-3. The loss is their worst at home since a 49-12 defeat against Houston on Sept. 28, 1974, and was Fuente’s first against the Blue Devils.
The start made it seem like a defensive struggle was in the offing. Virginia Tech managed just 60 yards in the opening quarter.
“I think we were really nervous a little to start,” Harris said. “But I think we settled in and got back to what we do best — making good decisions, getting the ball in the right guys’ hands.”
On the trick play, Jackson was even more open than Gray had been when Calhoun hit him for the third score of the quarter.
Duke outgained the Hokies 422-259 and never let up. In the fourth quarter, facing a fourth-and-3 from midfield, Blue Devils punter Austin Parker took the snap, tucked it and went for 28 yards off the right side, drawing boos. Harris completed a 12-yard pass to Gray on fourth-and-7 from the Hokies 19 on the same drive, and backup quarterback Chris Katrenick ran it in from 8 yards out two plays later.
HAZLETON RETUNS
Hazleton’s return for the Hokies was expected to boost their passing game, and did on the long touchdown pass, but his first impact wasn’t what Fuente was expecting: the wide receiver was called for an illegal blindside block in the second quarter.
THE TAKEAWAY
Duke: The Blue Devils highlighted a continuing problem for the Hokies with 234 rushing yards, led by Harris’ 100 on 17 carries. The total was more than Duke’s 181-yard average and worsened Virginia’s Tech’s average. They had been yielding 174 yards per game.
Harris, who was missing receivers early, finished 20 for 27 for 163 yards and was not sacked.
Virginia Tech: The Hokies hardly looked like a team that spent their bye week making improvements. With a first-and-goal from the Duke 6, three running plays netted 4 yards. The switch from Ryan Willis to Hooker turned disastrous on the fumble leading to Duke’s first score, and Fuente said both are battling injuries. He also defended Willis, who finished 7 for 18 for 112 yards with an interception.
“This certainly doesn’t fall on Ryan Willis,” he said.
UP NEXT
The Blue Devils open a two-game homestand with a night game against Pittsburgh.
The Hokies go on the road to face long-time rival Miami.
___
Follow Hank on Twitter: www.twitter.com/hankkurzjr
___
More AP college football: https://apnews.com/Collegefootball and https://twitter.com/AP_Top25