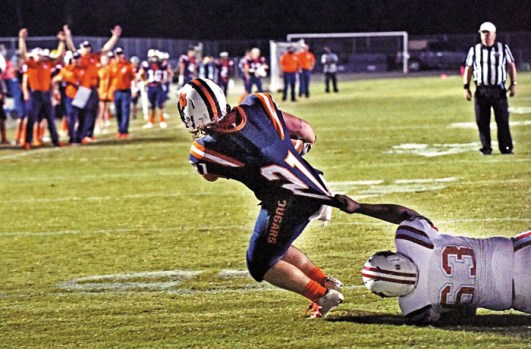 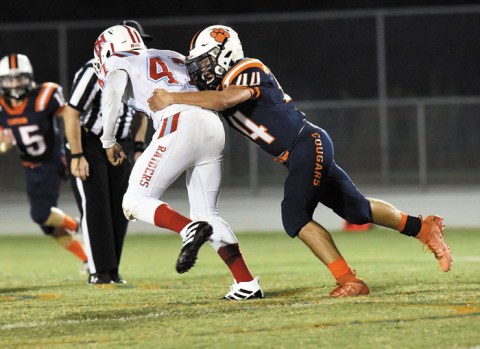 Carson's Carter Dowd (44) will be a key on defense and may be called on to carry the ball more also. File photo by Wayne Hinshaw, for the Salisbury Post 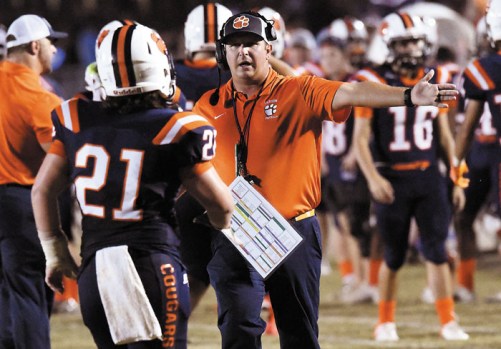 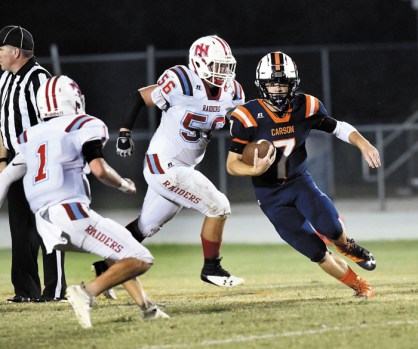 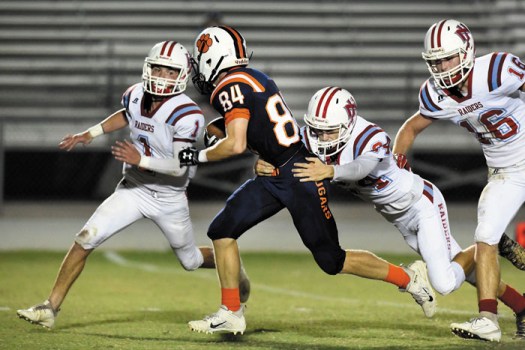 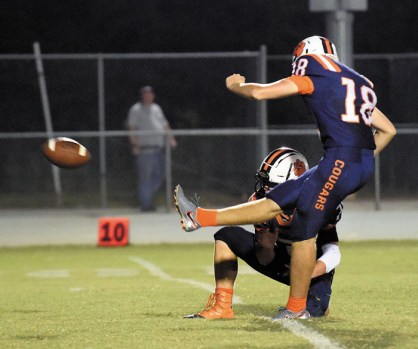 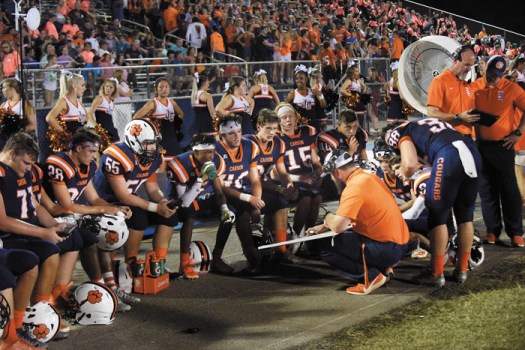 Carson's sideline with coach. photo by Wayne Hinshaw, for the Salisbury Post 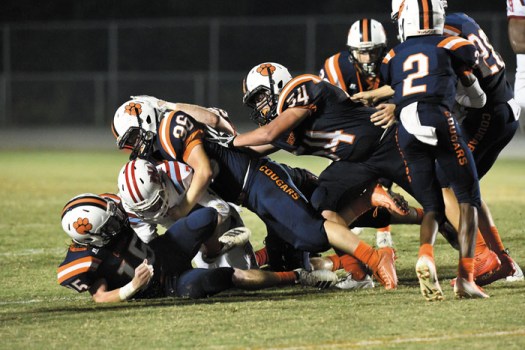 CHINA GROVE — Lightning flashed, game-ending lightning, as it turned out, just as Carson, backed up inside its 10-yard line, faced its first punting situation.

Even Mother Nature apparently was a Carson fan on Friday, and the Cougars added some electricity of their own in a 35-14 homecoming win against North Piedmont Conference opponent North Iredell.

Wrecked by a holding penalty the first time it had the ball, Carson (2-4, 1-0) scored on its next four offensive possessions to seize a 28-0 lead. North Iredell (0-6, 0-1) eventually fought back, but never got all the way back.

“We got our tempo going, we played fast, and that was part of the plan because we knew they had a lot of guys going both ways,” Carson’s first-year coach Daniel Crosby said. “We did some good things offensively and defensively.”

It was the first NPC game anyone has played, so Carson is on top of the standings. For a little while, at least, even undefeated Statesville will be looking up at the Cougars.

“We talked about the opportunity to start 1-0 in the league,” Crosby said. “We’ve made a lot of turnovers and we’ve had a lot of injuries the past few weeks, but our guys have done a good job of seeing the big picture. They’ve kept working and they’ve kept moving forward.”

Pyle, Johnston and Burns haven’t been major factors on offense this season, but Crosby has been searching for ways to score more. Pyle and Burns are two of the swifter Cougars, while Johnston runs like a Marine charging up a hill.

“I just try to be a tough runner and I don’t want to get tackled by the first guy or even the second guy,” Johnston said. “I want it to take three or four, and I tried to show that tonight.”

Pyle carried the load early, breaking a 62-yard dash past surprised Raiders for a 7-0 lead.

When Pyle went down with a foot injury (Crosby was optimistic that it’s not serious), Johnston was suddenly in the game and running amok, pin-balling would-be tacklers.

“He came to me this week and asked for a chance,  and I’d have to say he stepped up to the challenge when CP went down,” Crosby said.

Pyle had to be helped off after being smacked while he was airborne, and Carson had the ball at the North Iredell 41 when Johnston got his first touch. He romped for 16 yards. Then he got 14 more down to the 11. Then he banged to the 3. Then he dragged tacklers into the end zone for a 14-0 Carson advantage.

“Evan is a hard player who breaks tackles,” said burly Carson center Ben Klein. “And we made good holes for all of our backs. Our focus on the 0-line tonight was to do a better job of finishing blocks. We blocked to the whistle.”

London, who had his best rushing game of the season, got Carson’s third touchdown in the second quarter when he kept the ball and turned the left corner from 7 yards out.

“He made the right reads most of the time tonight,” Crosby said.

After Carson’s defense got another stop, the Cougars scored a quick touchdown. London dumped a short pass to Burns, and Burns out-ran defenders to the North Iredell 22. Courtney raced to the end zone on the next play. It was 28-0, and Carson was clicking like it hadn’t clicked since it scored 54 on opening night against South Rowan.

Carson had gone more than a month without winning since that South game, so it was an upbeat locker room.

“It had been a while for us, but sometimes all you need is one win to get back on track,” Klein said.

Two Carson penalties allowed North Iredell to put together an unlikely scoring drive late in the first half. Multiple Cougars had North Iredell QB Josh Pack hemmed in for a certain sack on third-and-long, but a flag for a hit out of bounds kept the Raiders going. Then another 15-yard penalty handed them another first down. Fabian Summers got the touchdown 54 seconds before halftime to make it 28-7.

After homecoming ceremonies were in the books, Carson was driving smoothly to begin the the second half when a pick-six by NI’s Logan Brooks — he made a terrific return — threatened to turn a potential romp into a potential disaster for Carson. London was under pressure, rolling to his left, and probably should’ve just thrown that one away, but he let it fly into trouble.

But Carson responded quickly, needing a little over a minute to score. London got the ball to Burns, and Burns’ wheels put Carson ahead, 35-14.

“That was a key point in the game because they were threatening to take the momentum away from us,” Crosby said.

With seven minutes left in the third quarter, North Iredell embarked on what would prove to be the game’s final possession. The Raiders moved it from their 40 down to the Carson 3. On third-and-goal from the 3, linebackers Andrew Rollins and Logan Rogers teamed for a tackle for loss.  On fourth-and-goal from the 4, Gabe Frick, Carson’s 315-pound tackle caved in the middle of the NI’s line, and the Cougars made the stop, Again, Rollins got up from the bottom of the pile.

“I thought our defense was outstanding tonight, with guys working and busting their butts,” Frick said. “When we stopped them down near the goal line, I was just getting into a four-point stance and running into their center and trying to take out their blockers, so our linebackers could make the stop.”

We may never know for sure, but if  North Iredell had scored there to make it 35-21, maybe the game would have been resumed on Saturday.

Instead, when lightning flashed with Carson still trying to get out of the hole, the decision was made — after about an hour of waiting — to consider the game official.