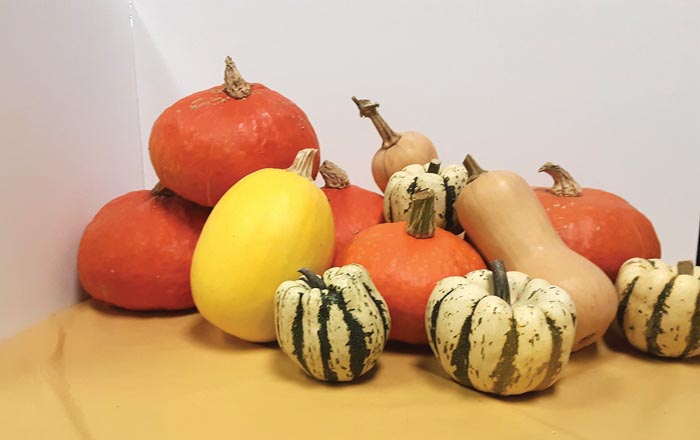 Submitted photo Do you know the difference between squash, gourds and pumpkins?

Fall is here, and that means harvest time. The cornucopia of fall brings a heaping bounty of squash, pumpkins and gourds. At the N.C. Cooperative Extension Office, we get this question all the time: “What is the difference between a squash and a pumpkin?”

Squash is considered a fruit and it grows on a vine. Here in the U.S. and Canada, we usually break down the squash family to winter or summer squash, depending on when they are harvested.

Summer squashes include yellow crookneck, patty pan and zucchini, and are grown from mid-April through September. Once harvested, they have a relatively short shelf life.

Then there is winter squash. Winter squash has thicker skin than its summer counterpart, making it ideal for storing through the long, cold winter months. Winter squash is planted in mid-June and is harvested at the same time as its pumpkin and gourd friends (mid-September through early October) , but unlike pumpkins and gourds, it is mostly intended for eating.

Gourds are cultivated much like their winter squash and pumpkin cousins. Walk around a fall crafts fair and you are sure to see some amazing gourd pieces. Hard-shelled, gourds have a long history of ornamental use, being turned into bowls and banjos alike. Unlike squash and pumpkins, gourds are inedible and only used for decorating.

Bright orange and perfect for carving, pumpkins are easy to distinguish, right? Well, sort of. Pumpkins come in a variety of colors ranging from blue to tan. And to make matters a little more confusing, they are in fact considered a squash, but not all squash are considered a pumpkin.

When you are picking out your pumpkins this fall, remember each type has its own specialty. If you are making pumpkin pie, sugar pumpkins are best. Those mini-sized Jack-Be-Littles are perfect for table decorations or as a single serving pumpkin soup appetizer. As for carving, Jack-A-Lantern pumpkins are bred for their penetrable skin and large, flat surface.

Fun facts about the pumpkin:

• Pumpkins are a member of the Cucurbita family, which includes squash and cucumbers.

• Pumpkins contain potassium and vitamin A.

• The largest pumpkin pie ever made was over 5 feet in diameter and weighed over 350 pounds. It used 80 pounds of cooked pumpkin, 36 pounds of sugar, 12 dozen eggs and took six hours to bake.

• In early colonial times, pumpkins were used as an ingredient for the crust of pies, not the filling.

• Pumpkins were once recommended for removing freckles and curing snake bites.

• Eighty percent of the pumpkin supply in the United States is available in October.

• Native Americans flattened strips of pumpkins, dried them and made mats.