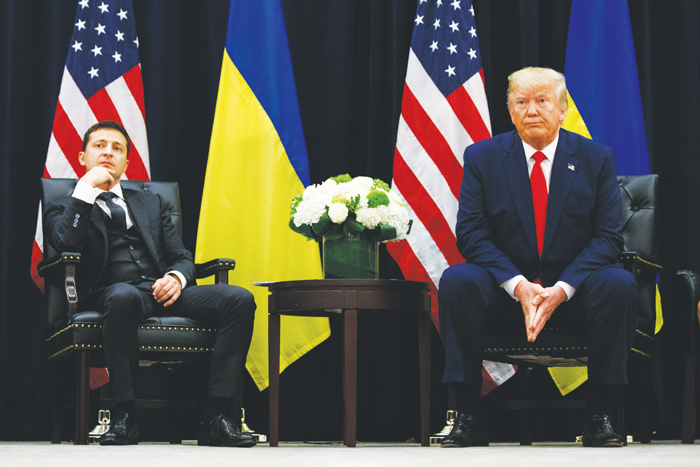 Budd called the impeachment inquiry “another fishing expedition” to remove Trump as president. Hudson said Democrats are on “a political vendetta.”

No House Republicans have supported opening the inquiry. But the list of House Democrats in favor of the probe grew significantly after reports that Trump pushed Ukraine’s president to investigate Democratic presidential candidate Joe Biden in a phone call. The White House released a transcript of the call Wednesday.

Ahead of that release, Budd said Trump has the right to reveal an unreacted transcript of the call.

“It’s incredibly reckless for House Democrats to base an impeachment inquiry on the second-hand account of a whistleblower whose attorney worked for Chuck Schumer and Hillary Clinton,” Budd said, referring to the Senate Democratic leader and Trump’s 2016 election opponent.

After the release of the transcript, Budd stood by his initial statement.

“I’m glad President Trump released the first-hand transcript of his call, and news reports indicate he will release the second-hand account in the whistleblower complaint,” Budd said. “The transcript contained no discussion of U.S. aid and nothing even remotely close to a quid pro quo. This looks like another fishing expedition on the part of Democrats, who have wanted to take out this president since the day he won the 2016 election.”

Hudson said Wednesday that Democrats “want nothing more than to undo the will of the American people.”

“They have tried time and again to launch a partisan impeachment process in search of a crime, and this time is no different,” Hudson said. “The American people deserve better.”

Scott Huffman, a Democrat who has announced he’s running against Hudson in 2020, said Americans deserve better from their president and a better representative than Hudson.

“We certainly need a congressional representative in North Carolina District 8 who is committed to upholding honest service as a public servant, not a former lobbyist who is working hand in glove as a VIP elite with the most corrupt individual to hold public office in American history,” Huffman said.

Rep. Mark Meadows, R-11, tweeted Wednesday, “Give me a break” in response to the impeachment probe.

The state’s Democratic representatives, Alma S. Adams, of the 12th District, G.K. Butterfield, of the 1st, and David Price, of the 4th, said they support House Speaker Nancy Pelosi’s decision to go forward with an impeachment inquiry.

If the House votes to impeach Trump, he will stand trial in the Senate to determine if he is removed from office. Sen. Thom Tillis, R-N.C., said he is against the inquiry.

“Nancy Pelosi should be embarrassed,” Tillis said. “The transcript debunks the Democrats’ false claims against President Trump and demonstrates that their call to impeach him is a total farce. This is yet another pathetic attempt by Democrats to destroy President Trump with falsehoods to overturn the results of the 2016 election. It has not worked in the past, and it will not work now.”

Tillis said the probe is distracting from working on real solutions to securing the border, rebuilding the military and cutting taxes.

Sen. Richard Burr, R-N.C., chairman of the Senate Intelligence Committee, has not released a statement on the inquiry.