‘Nobody told me no’: Community provides items for military museum at Powles Staton 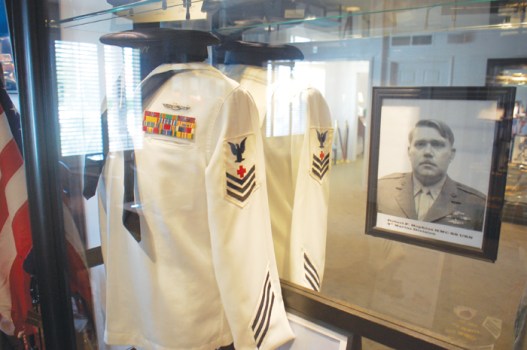 Several of the Navy artifacts of Robert 'Hoppy' Hopkins are on display. Mark Wineka/Salisbury Post 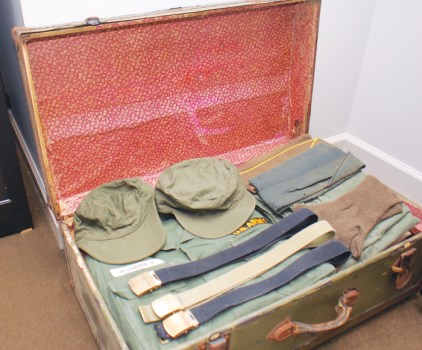 This Army suitcase belonged to Carl Water Kimrey, who often mentioned to friends and family that he and Elvis Presley were in the same unit. Mark Wineka/Salisbury Post 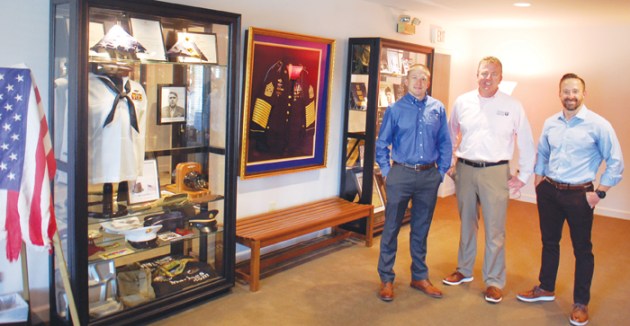 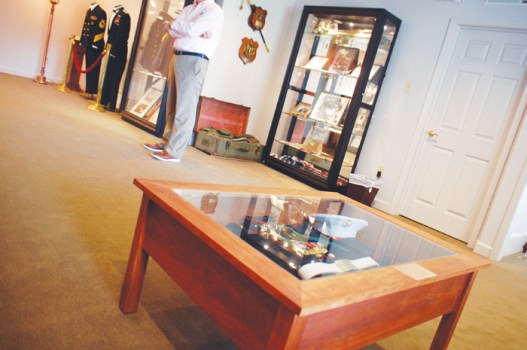 The table in the foreground encases in glass the dress uniform of Lance Corporal Nathan Ross Elrod, a Marine from Rowan County who was killed in action at age 20 in Ramadi, Iraq. Elrod's mother lent the piece to the museum. Mark Wineka/Salisbury Post

ROCKWELL — About the time Russ Roakes was collecting items for this military museum, he visited the home of Jo Teague, whose late husband, Hugh, had been a command master sergeant and 30-year Army man.

A Purple Heart recipient, Hugh served in both Korea and Vietnam.

Jo Teague told Roakes she had something in a back room that might be of interest for his project. Leaning against a wall was a beautifully framed uniform coat of Hugh’s. 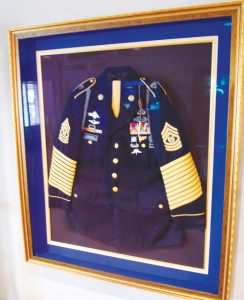 The uniform of the late Command Sgt. Maj. Hugh Teague, who served in Vietnam.

Today, that gold-framed uniform holds a prominent place on a wall of the new Rowan County Veterans Honor Guard Military Museum at Powles Staton Funeral Home. In a display case close to Teague’s uniform, the funeral home also has his combat boots and green beret.

“He was one of the first,” Roakes says.

Not far away sits what could be mistaken for a coffee table at first, but its glass top reveals that it encases a solemn memorial — the dress blues of Lance Cpl. Nathan Ross Elrod, a local Marine who was killed in action Oct. 21, 2006, in Ramadi, Iraq.

Elrod’s mother wanted the military museum to have the piece, hoping more people would see it and remember her son and his sacrifice for the country. The table had been in her den.

“We talk about Nathan every day,”  Roakes says.

“He was a good friend, a good guy,” Will Staton adds.

With item after item in the military museum, which occupies a front room at the funeral home, the stories about how they came to be here sound similar. And Roakes loves to tell them to visitors.

Veterans, their families or friends wanted the museum to have pieces that reflected their military service or times when the country was at war.

“Nobody told me no,” says Roakes, a funeral director at Powles Staton who easily could be called the museum’s chief curator. “The community came together and wanted to be a part of what we were doing.”

Some of the things are conversation pieces. Others take your breath away.

Cecil Whitley, a Salisbury attorney, gave the museum an Army hatchet and the hat of his best friend, who served in Vietnam. “He did not make it back,” Roakes says of Whitley’s friend.

Drew Barkley, who works part time at the funeral home, wanted the museum to have an Army suitcase that belonged to his grandfather, Carl Walter Kimrey. Kimrey liked to remind people he served in the same unit as Elvis Presley.

The museum has numerous things from Robert F. “Hoppy” Hopkins, who served in the 4th Marine Division of the Navy, including his uniform and a clock off one of the submarines on which he served.

There are mementos from Dowd Dunn, a former Navy diver who lives in Gold Hill, including shells from the ocean floor. “He has had his hands on enemy submarines,” Roakes says.

State Rep. Harry Warren helped supply flags that had flown over the U.S. and N.C. capitols. Charlie Frick, commander at Harold B. Jarrett American Legion Post, provided a story and picture of Jarrett, who was killed in World War II.

There’s a May 7, 1945, front page of the Salisbury Evening Post, whose boldest headline said, “Nazis Down, Japs to Go.”

The Air Force survival rifle that pilots carried in their planes came from an anonymous person who left it wrapped in an old U.S. flag and deposited it in the funeral home’s “Retire Your Flag” box.

Other display cases hold items such as a Marine officer’s sword, a grenade, books and photographs, a collection of military hats and challenge coins, insulated boots worn in the Air National Guards, or a ration book from World War II.

“That’s cool,” Staton said of the ration book. “I had never seen one.”

Roakes points out an anti-tank gun.

Roakes said he, Will Staton and Matt Staton sat down one day and asked themselves what could be done with this particular room to make it more relevant and meaningful, “and we came up with the idea of a military museum.”

It fits in with the funeral home’s membership in the Veterans Service Care organization. Powles Staton holds annual breakfasts and lunches for veterans, along with Operation Toy Soldier at Christmas and the Retire Your Flag collection points.

The funeral home often brings families in a side door that leads into the room now devoted to the military museum. Sometimes the family members might spend 15 to 20 minutes there before it’s time for a viewing or service.

“It really catches people by surprise that we have this here,” Roakes says. “It also gives folks a good break (from long visitations).”

The Statons have left one wall in the military museum bare in case a family wants to hold a viewing or funeral service in the room as a way of honoring a loved one who was a veteran. That has happened a couple of times, Roakes reports.

Powles Staton Funeral Home will have an open house to mark the opening of its military museum from 2 to 4 p.m. Oct. 6. Roakes hopes the museum will end up attracting school and church groups, besides walk-in individuals.

There are many other things of note in the museum. Bill Retallick, a collector of military artifacts in Faith, gave the funeral home a uniform once worn by a senior adviser to the Joint Chiefs of Staff.

A patch inside the jacket shows it was tailored at the Pentagon.

Next to this stands the formal dress uniform of the late Gen. Harold Earnhardt of Rockwell. Earnhardt rose through the ranks to become commander of the Air National Guard in North Carolina.

Another corner of the museum is dedicated to Danny Dietz, a Navy SEAL from Colorado who was killed in fighting in Afghanistan in 2005. Part of his story and that of Operation Red Wings was told in the 2013 movie “Lone Survivor.”

Through Veterans Service Care, Roakes made contact with Dietz’s mother, Cindy, and his sister, Tiffany, and asked if there were anything of Danny’s Powles Staton could have for the museum.

The family sent one of Dietz’s uniforms.

“That is easily a piece that could be in the Smithsonian,” Roakes says, “and it’s here in Rockwell.”