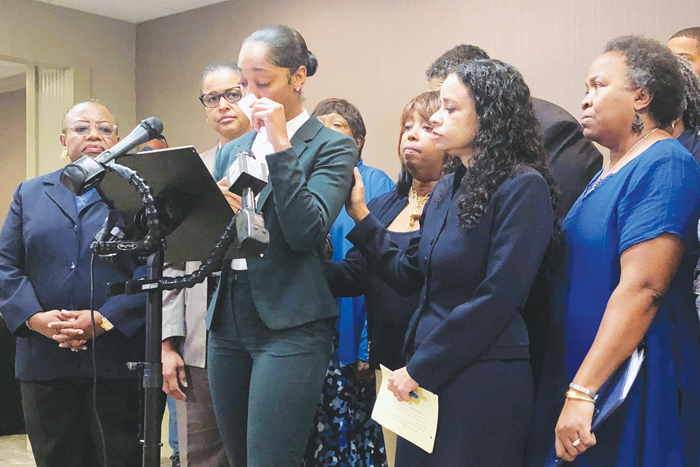 Jazmyne Childs cries during a news conference on Wednesday as she describes the sexual harassment she says she endured while employed by the North Carolina chapter of the NAACP. Martha Waggoner/Associated Press

RALEIGH — The national NAACP said Thursday that it has suspended a candidate for president of the North Carolina chapter over sexual harassment claims made against him by a former employee.

In a statement posted on its website, the Baltimore-based organization said the Rev. Curtis Gatewood was suspended Thursday from membership immediately pending a hearing into the sexual harassment claim that the former employee made public at a news conference Wednesday.

NAACP President Derrick Johnson sent the suspension letter to Gatewood, telling him “to immediately cease holding himself out as a member of the association.” He’s ineligible to run for president of the North Carolina NAACP because candidates must be members in good standing, the statement says.

Gatewood, who had been a member of the Alamance County NAACP, wrote in a text message to The Associated Press that he will seek a hearing on his suspension. Johnson’s letter to Gatewood says he has 20 calendar days to request a hearing.

“The allegations are totally false,” Gatewood wrote. He blamed the Rev. William Barber, the past president of the state chapter, for the timing of the harassment claims with the presidential election scheduled for Oct. 5.

“His actions are those more of Judas than Jesus,” Gatewood wrote of Barber. “He had already committed crucifixion in 2017. Now here he is in 2019 trying to stop God’s miraculous resurrection. But what God has for me, he has for me.”

Barber ordered an investigation of the harassment claims in 2017. Gatewood left his job with the North Carolina NAACP during the investigation.

When a complaint is filed, the NAACP constitution allows the president to suspend a member if he believes there is the possibility of danger or harm to the organization, Johnson wrote to Gatewood.

Upon reviewing the complaint that Jazmyne Childs, the former employee, filed Sept. 11, “I am satisfied that your continued membership in the association presents a danger or harm to the NAACP and the North Carolina state conference and that action is necessary to prevent or mitigate that harm,” Johnson wrote.

The letter also says: “You are directed to immediately cease and desist from holding yourself out as a member of the NAACP.”

The suspension came just over 24 hours after a news conference by Childs, 27, the former state youth and college director for the state NAACP, who accused Gatewood, then her supervisor, of harassment. But it came almost two years after an investigative report by a law professor and attorney found that Childs was a credible witness and Gatewood, now 60 years old, was not. The report concluded that the incidents of harassment had occurred.

Barber, a member of the NAACP’s national board of directors, said Thursday that the national organization should have acted after it received that report from state officials.

“While this has taken longer than it should have, we are pleased with this first step,” Barber said in text message. After the hearing — if Gatewood chooses to have one — it’s imperative that the national NAACP adopt a sexual harassment policy, he said. It does not have one now.

An attorney for Childs said she didn’t have a statement yet.

Childs said at a news conference that she endured unwanted physical contact and harassment starting shortly after her employment began in January 2017. Childs, 27, said she came forward because the national NAACP didn’t respond to her letters seeking that it expel Gatewood from membership, something state chapters cannot do.