‘Kimberly Akimbo’ is funny in the right places, and thoughtful 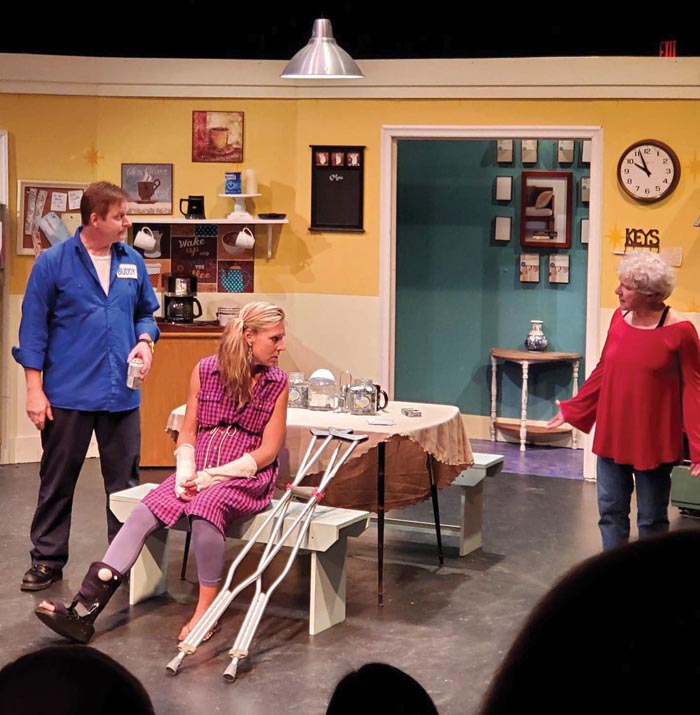 If you don’t know what to expect from “Kimberly Akimbo,” which opened Thursday night at Lee Street theatre, go anyway.

If you’re offended by profanity, look past it to the real meaning of the plot — we all deserve to be happy, and we can’t wait for someone else to make it happen for us.

Keep in mind that there’s a touching, almost teary ending that will make the whole experience worthwhile.

Director Rod Oden and an excellent cast bring the play to life and create a family that goes one step beyond dysfunctional. As you watch the family’s secrets revealed, it sounds like a serious drama, but it’s quite funny because playwright David Lindsay-Abaire went for laughs.

Linda Jones is just spectacular as Kimberly, the daughter who was born with progeria, a rare genetic condition that causes a child’s body to age fast. In Kimberly’s case, four and a half times faster than her peers.

Jones makes us believe she is a 16-year-old.

The plot emphasizes the oddness of the family. Mother Patti, played perfectly by Sara Lee, is pregnant. She’s just had carpal tunnel surgery on both wrists and cannot use her hands. She expects Kimberly and husband Buddy to wait on her, from feeding her to taking care of her bathroom visits.

At one point, she hobbles in on crutches. She fell off a loading dock when going out for a smoke. Yes, she’s pregnant and smoking. Why isn’t she worried about the baby? Lee is whiny, brassy, bossy and not likable, but she’s funny.

John Minton milks his role of Buddy for everything it’s worth, with enormous gestures, mugging for the audience like a cartoon character, and they loved it on patrons night.

Buddy is a drunk who works in the booth at a self-serve gas station. He seems to care for Kimberly. He tries to protect her from the dangers of the world.

All this takes place in New Jersey, with exaggerated Jersey accents, in a run-down town of run-down people.

Keep a close eye on Hayden Weeks, as Jeff, a classmate of Kimberly’s. He’s going to have more roles on the stage, with his sincerity and comfort in a part.

Jeff wants to do his science paper on Kimberly’s disease. Buddy says no way is anybody going to do that to his little girl, but Kimberly likes the attention — she sure doesn’t get much at home — and she and Jeff become good friends.

When a woman who looks like a drug addict shows up and Kimberly knows her, that’s quite a surprise. Aunt Debra has been living in the town library after finally finding out where her sister, Patti, and family have moved from Secaucus.

It was a hasty move, with no forwarding address; Debra might have had something to do with it. Actress Diane Draper really puts on the Jersey girl swagger. She knows Kimberly has a soft spot for her, and she plays it to her own advantage. She used to live in the basement of the family’s home but was banished after an incident that will raise your eyebrows while you laugh.

Debra has a scheme to get money to take a bus to Miami, where it’s all happening, whatever “it” is. She just needs a little cooperation from Kimberly and her new friend.

Kimberly isn’t sure. She’s been trying to make changes at home. She puts out a “swearing jar,” requiring a nickel deposit every time one of her parents swears. It doesn’t take long to fill the jar.

She’s pushing her dad to cook dinner for them, instead of always bringing home fast food, if he shows up at all. Buddy feels bad and vows to give up drinking for her.

Even Jeff, who seems like an average teen, has a wrecked family. His mother is dead, his older brother is in jail, and his father has to travel on a moped, which is sidelined.

Weeks and Jones do have a chemistry. Forget that actress Jones is already retired, and Weeks is in early college; they make it work. He believes she’s 16, too.

Patti and Buddy both forget Kimberly’s Sweet 16 birthday. Patti is too involved in herself, convinced she’s dying; Buddy is drunk, again. When he does remember Kimberly’s birthday, the celebration takes a scary turn for Kimberly.

She makes her own plans. She persuades Debra to split the money more fairly, then she goes all in, dressing like a grandmother and going with Jeff, her “grandson,” to the bank.

Debra’s got loose lips, and Kimberly is no dummy. It doesn’t take long for her to put the pieces of the puzzle together, and what she sees is ugly and shocking.

The ending is the payoff, and you need to go to see what happens. What matters is, at the end, Kimberly is free, and she’s going out into the world to see what’s there.

“Kimberly Akimbo” has adult themes and profanity, so it’s not something for children. But director, cast and crew have worked well together to create a night full of emotions.