High school football: Picks, kicks, and a lot to fix 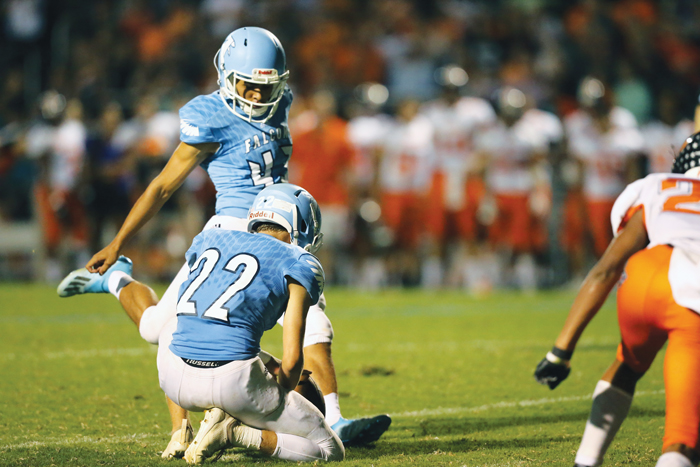 Daniel Sell #22 for West Rowan holds for #43 Fedrico Cruz. The field goal turned out to be the winnig points for the Falcons in their 24-21 victory over Davie County. James Sipes for the Salisbury Post 9/13/2019

SALISBURY — The 2019 football season is blowing by us at light speed.

It’s still hot, so it’s hard to grasp it, but the reality is that Carson, North Rowan and Davie play their sixth games tonight, so they’ll be more than halfway through the regular season. Continuing past Game 11 appears unlikely for Carson. It’s looking shakier for the War Eagles, despite their 3-0 start, because their league looks even more brutal than usual.  North Rowan should play at least 12 games. Maybe more.

A.L. Brown, which only has 10 scheduled, plays its fourth game tonight.

It’s Game 5 for East Rowan, South Rowan and still unbeaten Salisbury. West Rowan, which already has played five, will be on the sidelines tonight.

I still haven’t seen South Rowan or Carson, so I’m far from enlightened about those teams. I’ll get my first look at Carson tonight against North Iredell in what may be the last game the Cougars have a realistic chance to win. After that, the schedule looks meaner than a junk-yard dog. It’s A.L. Brown, East Rowan, Statesville, West Rowan and South Iredell.

I’m not unbiased, but I think Rowan is OK. Salisbury is good. West is good. East is better than people realize. North has potential.

West Rowan (2-3). The issue has been turnovers. The physical Falcons easily could be 4-1.

North Rowan (2-3). Should never have lost to Lexington, but the Cavaliers played that one without their starting quarterback.

Salisbury (4-0). Dominant defense. Vance Honeycutt may be back at QB tonight. That not only helps the offense it allows Jabril Norman to focus on defense, and he’s one of the county’s best players.

South Rowan (1-3). It won’t be tonight, but the Raiders should get some wins in the CCC.

Carson (1-4). There was considerable optimism after flattening South Rowan on opening night, but injuries have hurt. Getting behind 28-0 on Saturday at previously winless 1A North Stanly wasn’t encouraging, but the Cougars have a chance to rebound tonight.

The most underrated aspect of high school football is the kicking game because there’s such a wide disparity in the talent that schools have available. Some high school teams, like Mooresville or West Davidson, can kick a 44-yard field goal with no sweat and put kickoffs in the end zone. But some teams are so inefficient at kicking PATs that they should just go for two every time.

Some teams can punt it 40 yards with decent hang time, while others are going to shank it 18 yards and may as well go for it on fourth-and-5.

While the Post record book is thinner on kicking marks than it is on rushing, receiving and passing records, we have tried our best to track all the long field goals over the decades.

We’ve considered “long field goals” to be those of 45 or more yards.

The record for the longest field goal by a Rowan County player still belongs to North Rowan’s Tracy Maynor, who kicked a 53-yarder against East Davidson in 1988. That’s not only a long field goal, it’s a long time for any record to hold up.

The NCHSAA record book says the state’s longest field goal ever was a 61-yarder that Burns’ Chase Ingle nailed against Shelby in 2000. That field goal must have been something, but Burns still lost 48-3.

School field goal records, according to the Post annals:

As far as the weekly predictions, the panel continues to struggle. I was 4-2 last week for 14-6 for the season, but admittedly got lucky on North Rowan/East Rowan and possibly on A.L. Brown/West Rowan, as well. Scott Maddox (13-7) was 3-3. Like me, he was horribly off on Carson/North Stanly and he was equally amazed that Davie got behind 17-0 quickly and lost to a South Iredell team that had been torched the previous two weeks. Marny Hendrick (12-8) had a dreadful 2-4 week due to being on the wrong side of the Davie and Carson debacles as well as North/East and A.L. Brown/West.

The toughest calls are A.L. Brown at Davie and East Rowan at West Stanly. Rather than flipping a coin, I’ll just take the home teams.

South should scored a couple of touchdowns, but it’s unlikely anything unexpected will happen.

North Davidson clearly isn’t the juggernaut it was in 2018, but South is still a 34-point underdog. The Massey Ratings give South a win probability of 2 percent.

South used to beat up on North Davidson in the 1980s and 1990s, so the Raiders still lead the series 12-6. North Davidson, obviously, has won big the last two seasons since the Black Knights came down from 4A to the 2A Central Carolina Conference.

Salisbury is a 17-point favorite.

Lexington is quite a bit better on defense than offense, so this figures to be a low-scoring game.

Lexington’s lone victory came against North Rowan, which played without QB Kyree Sims. The Yellow Jackets won despite not making a first down in the second half.

Eighteen points have been scored so far this season against the 10th-ranked Hornets. No one has made a drive against the Hornets yet, so they have a chance to shut out Lexington if they fumble it on their own 10-yard line or something like that.

DeVore Holman, long-time coach at Davie, is in his first year as Lexington’s head coach. Mike Herndon, another long-time Davie coach, is one of the coaches responsible for Salisbury’s powerful defense.

History is on Salisbury’s side. Since 2003, they’ve won 15 of 16 against the Yellow Jackets.  It’s a long rivalry. There’s been a clash with Lexington every year since 1956.

The last time Salisbury started 5-0 was in 2008, although forfeits came into play late that season and were a major factor in wrecking it.

It’s hard to see anything going wrong for the Cavaliers. They’re 35-point favorites in their Yadkin Valley Conference opener and have a 99 percent win probability.

Carson holds a 6-3 lead in the series and has won the last six in a row.

Carson is regarded as a 17-point favorite by the Massey Ratings, with a win probability of 80 percent.

Still, the banged-up Cougars have been smacked around thoroughly the past four weeks, with none of those games closer than a 20-point margin, so victory is far from a sure thing.

The other thing to consider here is that North Iredell has this one circled. It’s probably the Raiders’ best chance to get a win this season. Like Carson, they’ll be underdogs the rest of the way.

Both teams have been smacked around, but one of them is going to be alone in first place in the NPC on Saturday morning.

It’s Mustangs vs. Colts in Oakboro, but they’re probably won’t be a lot of horsing around.  This could be the best game involving a Rowan team.

A lot depends on East’s mental state. The Mustangs have to bounce back after letting one slip away last week.

West Stanly is a run-heavy team that has trampled opponents on the ground while throwing only nine passes per game. West Stanly has destroyed foes, 176-39, although its list of opponents is not overwhelming. A 42-0 wipeout of North Stanly stands out.

MaxPreps rates West Stanly higher than the East Lincoln team that smacked East Rowan. MaxPreps also  ranks the Colts higher than Salisbury, a little higher than West Rowan and only a little behind A.L. Brown, so this must be a really good 2A team.

On other hand, the Massey Ratings have East Rowan as a 2.5-point favorite tonight.

Davie has more firepower this time. I can comfortably say that because Davie has 10 TD passes, while A.L. Brown has zero.

On the one hand, Davie lost to West Rowan, while A.L. Brown beat West Rowan.

On the other hand, Davie beat Mooresville, while A.L. Brown lost (by 30) to Mooresville.

So no one can honestly say they have any idea what’s going to happen.  It will be exciting. Every Davie game is exciting.

For what it’s worth,  MaxPreps believes Davie is better, although how healthy Davie is I don’t know. Tate Carney got hurt in the West Rowan game and didn’t play last week, and he’s a difference-maker. Josh Robinson, the other veteran back, also was out, although the next guy in line (Devonte Lyerly) rushed for more than 200 yards.

The Massey Ratings have Davie as a 2-point favorite with a projected score of 35-33. Fasten your seat belts.