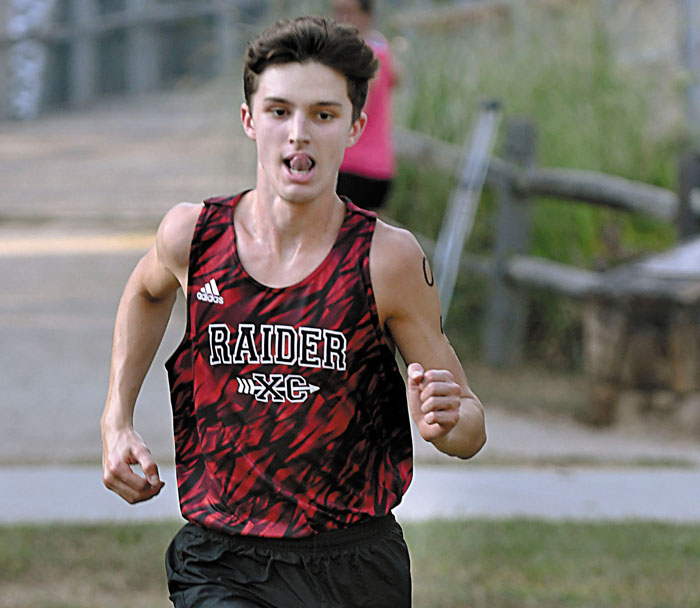 Julian led all the way, took his second straight individual title in 16:47 (12 seconds faster than last year) and led the Raiders to a repeat team title.

It was the fastest time recorded in the meet since Carson’s Zachary Marchinko’s ran a record 15:44 in 2015.

It could’ve been almost boring, only it’s never boring to win. Julian enjoyed it.

“I really like the county meet and I like this course, and I appreciate the people that put a lot of work into it,” Julian said. “This is where you’re running against the people you know and you’re seeing lots of people you know.”

Carson senior Zac Barbee, as expected, pursued Julian for as long as he could and as hard as he could. They were 1-2 shortly after the starter’s gun sounded — and still 1-2 as they charged into the woods at Dan Nicholas Park. Barbee finished in a strong 17:33, but it seemed like a long wait between his arrival at the finish line and Julian’s.

“Zac was right there  for a while — I could hear him behind me,” Julian said. “But after that first mile, I stopped hearing him.”

South’s Julian, Ian Waugh (3rd), Landon Cromer (4th) and Nolan Miller (6th) were all in the books by the time the clock read 18:25. It was officially over when South’s fifth runner, Trent Rivers, crossed the line in 17th place.

Four West runners made the all-county team with top-12 finishes. Luke Harrison (5th) paced the Falcons and was followed by Drake Barclay (7th), Damian Ackman (10th) and Jacob Bogle (12th). All of them ran in the 18s.

When South won the Rowan County Championships in 2018 it was seen as a turning point and a cause for celebration.

But that’s also where the Raiders’ season peaked last Oct. 2 at Dan Nicholas Park. Maybe they relaxed a bit. Maybe their lost their edge.

Julian was the Central Carolina Conference individual champion, but the team finished third in a rugged league.

“After our success in the county meet last year, we really fell off,” said South coach Scott Julian, Noah’s father. “The county meet was still big for us today and we definitely we wanted to win it again, but we don’t want this event to be our peak this time. We’ve talked a lot about having bigger goals and finishing the season stronger.”

Both Julians had concerns about the direction things were headed in because South had not performed  at its best in recent weeks. But everyone picked it up on Thursday. South got back on track.

South’s times were especially impressive in 90-something heat.

“I’m watching the Weather Channel and the guy says the hottest day of the week is going to be Thursday, with temperatures in the mid-90s, and I was like, ‘Oh, that’s just great,'”  Noah Julian said with a laugh. “It would have been nice if had been a little cooler, but I can’t complain. I’m really proud of how our team did today. This is the best we’ve competed in a while. We did everything  today that we intended to do.”