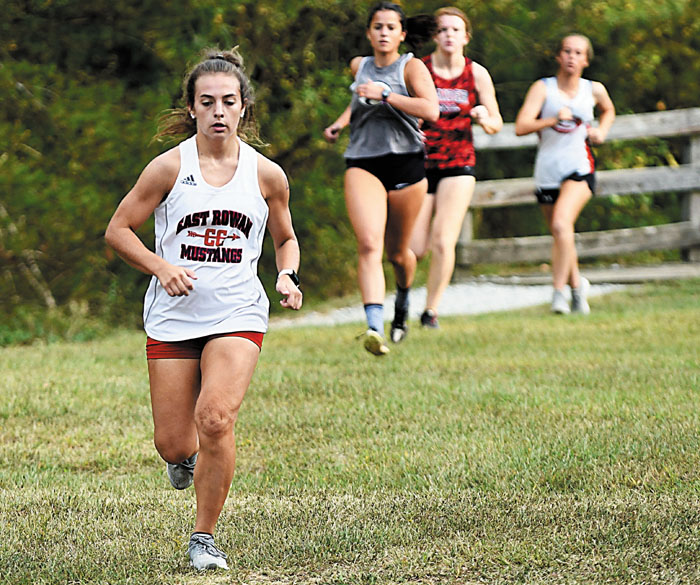 SALISBURY — Looking like the elusive point guard that she is during basketball season, East Rowan senior Adalie Harrison scooted into the woods at Dan Nicholas Park as the front-runner.

She never looked back. No one caught her. Harrison was the individual champion in Thursday’s Rowan County Championships, running a time of 21:04.

For Harrison, who has plans to compete in soccer as well as track and field this spring, cross country has been an interesting second sport. She placed third in the Rowan County Championships as a freshman. She was out of action with injury as a sophomore, but placed fourth last year, when she made a comeback. Now she’s a champion.

“It’s been a long journey for me in cross country, lots of ups and downs,” Harrison said. “I think when I was younger, I over-trained and just got worn down. Now I’m training a lot smarter.”

This was the third time in her consistent career that Conrad has been runner-up in the county meet. She was second in 2016 and 2017. In 2018, dehydrated and ill, she finished fifth. Conrad did win the pre-county meet last month.

“After what happened to me here last year, I’m very happy with just feeling good right now,” Conrad said. “I know I gave it everything I had.”

Carson has been the favorite in the county for a while, but there have been disappointments in county meets. In the last six seasons, Carson has won four championships, but the Cougars finished second to South in 2018 and were nipped by Salisbury in 2016.

Carson coach Les-lee Ihme had a bizarre dream on Wednesday night, in which all but four of her runners fell in the woods. They finished first, second, third and fourth, but they still couldn’t post a team score.

In real life, however, things went a lot more smoothly,

“Most years, we’ve had five or six really good runners,” Ihme said. “But people get sick, they get hurt, they fall down. Bad things happen. But now we are so deep that we can withstand something happening to one runner. We’ve got a greater margin for error.”

“Overall, I was very happy with how we ran,” Ihme said. “The frustrating part so far has been the weather. We’re getting to that time of year where we usually see big improvements in our times as it gets cooler. But it hasn’t gotten cooler. When our bus pulled into the gate today, it was 94 degrees.”

Carson has more goals ahead. The Cougars expect to win the North Piedmont Conference. After that, they have a serious chance of qualifying for the state meet. The NPC has been placed in the West Regional this year instead of the Midwest, and while it still will be a challenge, the West isn’t as deep as the Midwest.

Sophomore soccer standout Sutton Webb has been a powerful addition to Salisbury’s team. Even competing with a swollen knee, she led the Hornets with a third-place finish. Salisbury senior Leah Cressler, a perennial all-county runner, was 11th.

East had a cluster of runners between 14th and 20th to support Harrison and secure second place.

But it was Harrison’s evening in the sun.

“I had my sights on catching Adalie,” Conrad said. “There’s a loop in the woods where I usually gain ground, and I knew I had to try to make a move there, but I couldn’t catch her. Adalie was really strong today. I’m happy for her. She deserved it.”