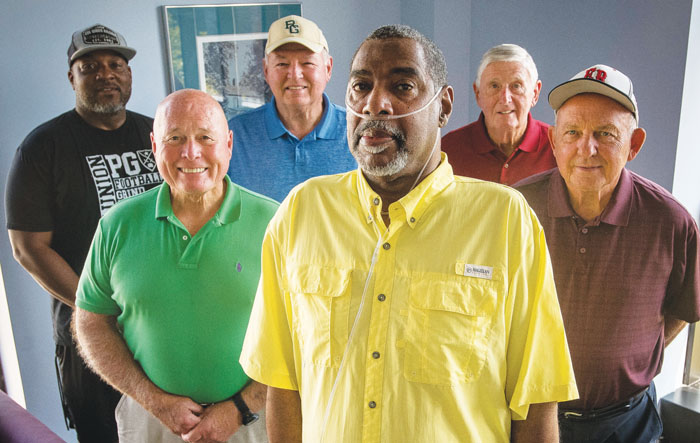 Former high school coaches and family and friends are rallying behind an East Rowan High alumni who is on a waiting list for a lung transplant. Walter G. Sifford, front, is supported by, back left to right, his cousin Chris Sifford and former coaches Roger Secreast, Oron Earnhardt, W.A. Cline and Gilbert Sprinkle. Jon C. Lakey/Salisbury Post

Since then, he’s had little breathing capacity and, after losing 60 pounds, has been approved for a lung transplant in January.

On Saturday, many of Sifford’s family, friends and former coaches will gather for a fish fry to raise monty to offset his medical-related expenses. The money will help cover travel, lodging, medication and other medical costs. He hopes to raise $15,000.

The fundraiser will be from 11 a.m. to 5 p.m. at Geneva Oglesby Community Center, 663 Dunn’s Mountain Road, Granite Quarry.

Sifford, who was an all-county football player in the 1970s, recently got together with his former coaches and a cousin, Chris Sifford, to reflect on what the transplant will mean for the 60-year-old.

“We all coached Walt, and he’s one of us,” said former coach Orron Earnhardt. “He played on the field years ago where he helped us, but right now he needs help. And I think as responsible adults, we need to step up and help him. He’s not playing a game anymore; he’s playing a game of life right now. That’s what we’re here for, to help him raise money so that he can have a quality of life.”

“It sorta shocked me,” said former coach Gilbert Sprinkle. “I knew he was having some trouble, but I didn’t know it was this serious. I coached Walt in basketball for two years. Hopefully, we can get him some help and get him straightened back out.”

The coaches are encouraging the community to stand behind Sifford and support the fundraiser because “it’s the right thing to do,” said former Coach W.A. Cline.

“This is a way for us to give back to him. It’s a way for the community, coaches, friends and family to give back what he’s done for us over the years. It’s paying it forward,” Cline said.

Sifford was riding a Bobcat, a machine that can easily weigh more than a ton, when it tipped over. He was pinned underneath, causing serious damage to his lungs.

His cousin Chris Sifford remembers the accident as if it were yesterday. He’d been walking at the West Rowan Elementary School track and heard sirens in the area but didn’t think too much about it. He knew the sirens were coming from the Spencer-East Spencer area. Later, he learned from his mother that Walt was in a life-threatening accident, Sifford recalled.

“I don’t think we understand when we hear those words, ‘life-threatening,’ until we actually go and see,” Chris said.

After a couple of weeks, Chris visited his cousin, who he said was unrecognizable. Walt remained in a coma for six weeks. It was a difficult time for the family because about the same time, a number of other relatives died. Walt learned much later that in despair, his family had considered pulling the plug.

Then an uncle said, “Let’s give him some more time, and he came through,” Chris said.

“That was tough seeing him in there,” Chris said.

Since being released from the hospital, Walt has passed out after losing his breath. He was in a Concord hospital for seven days and heard news he never thought he would: Doctors told him they could “get me a lung” that would give him at least 20 more years.

He was sent to Duke University Medical Center, where doctors told him he was overweight. If he could lose weight, they said, they would consider a lung transplant. He’d gotten up to 300 pounds by just sitting around, Sifford said.

Sifford lost 40 pounds in six months, and the final pounds put him at his goal of 60 pounds. Now that it’s time for the surgery, Sifford will need help afterward as well. He’ll stay for six months to a year in a rehabilitation apartment not far from Duke hospital. Much of the money raised at the fish fry will help with the costs that come after surgery.

Sifford said the community has always been behind him 100% and he’s thankful. He said he’s grateful to his family and friends, including Patricia and Earlene Sifford, Nicole and Shanda Holmes, Sherry Hawthorne and many more.

Saturday’s fish fry will include fish and hot dog plates with side dishes. Each plate will be $10, and drinks will be $1.