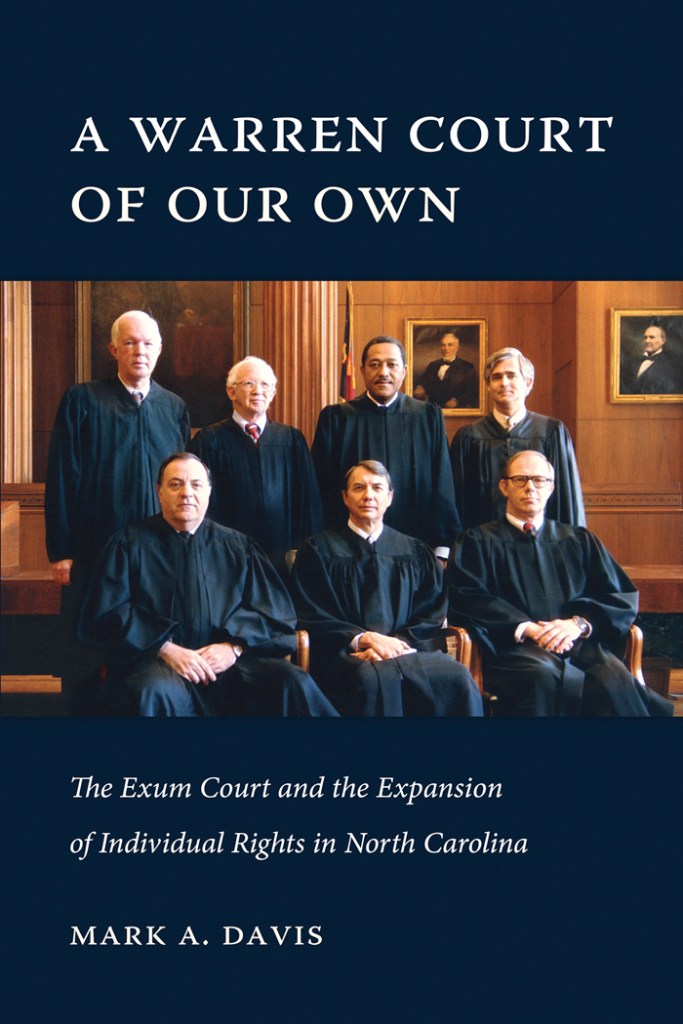 Please hold your eye rolls. There is a new book that talks about the N.C. Supreme Court in the mid-1980s. Current N.C. Justice Mark Davis has written “A Warren Court of Our Own: The Exum Court and the Expansion of Individual Rights in North Carolina.”

It’s thoroughly researched, documented and foot-noted, because Davis started out with the topic as his thesis for the LL.M. course he was taking at Duke University. LL.M. is a master’s of law degree that requires a juris doctor degree in law.

Once Davis started studying various briefs that have helped to form North Carolina law, he saw a period of big changes, and it turned out to be when Jim Exum was Chief Justice in the 1980s.

Exum is credited with establishing the N.C. Judicial Conference as a forum for all state judges to consider issues of mutual concern. He advocated Alternative Dispute Resolution, to solve issues outside the courtroom.

Exum has taught at the law schools of the University of North Carolina at Chapel Hill, Duke University and Elon University.

Davis had plenty of material to study. In his program at Duke, he studied the rise of personal rights, and he calls Exum’s leadership a “very productive time for the court.” He compares it to U.S. Justice Earl Warren’s court of the 1950s and ‘60s.

Davis said Exum’s court looked at things in a new way, and changed the law. The more he learned, the longer his thesis became, too long. But he knew he had something he wanted to write more about.

He added biographies of the other justices and the history of elections to the court. Luckily, he found Carolina Academic Press was the right fit for “boring legal books.” His book will be published Oct. 21.

With the help of a couple of law students, and from Jim Exum himself, Davis poured himself into the work. He spent, he guesses, 18 hours interviewing people, including law clerks, court observers and others to get the whole picture. As a graduate of UNC law school, he relied on and received a great deal of help from the school.

The Duke program requires coursework in the spring and summer, while you do your day job. Davis calls the degree a master’s in judicial studies, a  way to learn more about the law, usually honing in on specific issues.

The first part of the book tackles the history of politics, and the history of judicial election. In North Carolina, Davis Says, the Democratic party was in control, especially in the 1970s. Before Exum’s election in 1986, the last Republican elected to the court was in 1896.

The governor and presidents were Republican in Exum’s time, but not the courts. Gov. Jim Martin filled three vacancies on the N.C. Supreme Court, and one of them was Rhoda Billings. Martin then appointed Billings as chief justice. Exum quit the court, then ran against Billings in the next election.

“If he had lost, he would have been off the court,” Davis says, but he won, and all this took place within three months.

The court went from seven members who were Democrats to 4-3, the three were Republicans. Then five of seven seats were on the ballot and the election had challengers. But again, seven Democrats won. The rest of Davis’ book is about what Exum did after that.

Exum’s court looked at the death penalty, ruled on worker’s compensation and a variety of issues that dealt with people’s rights — individuals, not groups or organizations.

Many of the cases that court decided were landmarks. They favored criminal defendants, expanded worker’s compensation and more.

People were really interested in what the court was doing, and all of the members turned out to become legal luminaries, including Sarah Parker and the late I. Beverly Lake.

“Exum was liberal for a Republican, and their decisions were liberal,” Davis says.

It was also a time when the platforms of the two parties were flipping. Some members of the court were old-school Democrats, more conservative, completely different from today’s Democratic party. “There was a lot of division in the parties in those days.”

“It was so much fun to write, and I spent so much time working on it.”

Now he has to promote it, and will be speaking at the Inn of Court in Charlotte about it.

He’ll be in Salisbury when the N.C. Supreme Court holds a session here in October.

He figures there are about 20,000 lawyers in the state, and he might be able to find that many buyers of his book.

The book is available on Carolina Academic Press’ website cap-press.com, at Amazon, and Davis is hoping some independent book stores will carry it, as well.