And this one belongs to Marty: Brennaman calls final game 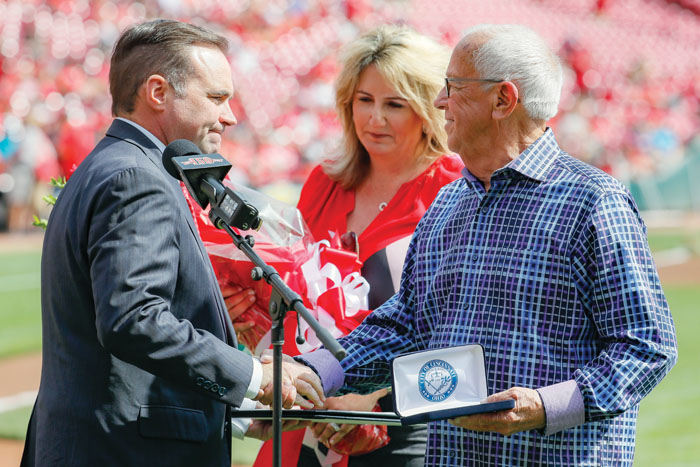 By JOE KAY AP Sports Writer
CINCINNATI (AP) — And this one belongs to Marty Brennaman. Tears and all.
With fans applauding his every mention, the Hall of Fame broadcaster called his final Cincinnati Reds game Thursday, ending a 46-year career that featured so many big stars and historic moments — Hank Aaron, the Big Red Machine, Pete Rose — and more than a few verbal tiffs with fans and players who weren’t exactly endeared to his tell-it-like-it-is approach.
He went out in style and emotion, choking back words and taking long pauses during his final sign-off after a 5-3 loss to the Brewers.
“And for those who are listening wherever they might be, just know how much you’re loved … (long pause) … and how much you’re appreciated,” Brennaman said. “That’s all I got.”
Lots of tears, right from the start.
Brennaman popped into the press box to shake writers’ hands before the game. He recounted a touching phone call from Joe Girardi as he drove to the ballpark.
“A tough day,” Brennaman said. “I’ve cried three times already.”
The Reds billed it as a “Marty Party” and borrowed a favorite phrase from former broadcast partner Joe Nuxhall, declaring that “this one belongs to Marty.”
At the end of yet another tough season — the Reds’ sixth straight with a losing record — the voice that so many Cincinnati fans equate with baseball became the soundtrack to the final home game of not only a season but a career. The Reds distributed commemorative transistor radios so fans in the stands could hear that voice call a Reds game one last time .
Brennaman is more comfortable being heard rather than seen, as is a broadcaster’s role.
Not today.
The 27,774 fans stood and cheered when the mayor declared it Marty Brennaman Day during pregame festivities on the field. The 77-year-old Brennaman then headed for the broadcast booth — his working place for nearly a half-century — and the same play-by-play call that’s as familiar as a first pitch.
He and color commentator Jeff Brantley didn’t ignore the focus of the day, but neither did they dwell on it. When Brennaman noted that it felt hotter than the announced 74 degrees at game time, Brantley said: “Could be the stress.”
Brennaman then launched into describing each batter the same way he has for decades — name, stats, how they’re trending. When Aristides Aquino homered inside the left field foul pole in the bottom of the first, Brennaman described it this way: “If it’s fair, it’s good. And it is, and it is.”
Along the way, he made another pitch for Rose to get into baseball’s Hall of Fame despite his ban for gambling. Brennaman said Rose might not get inducted unless it’s posthumously, and “if that should occur, that would be the grossest injustice of them all.”
Fans were hoping the home team would win so they could hear Brennaman’s familiar line after a victory: “And this one belongs to the Reds.” Instead, his signature line was quietly consigned to history.
Brennaman began his career in 1974 describing Aaron’s historic homer No. 714 that tied Babe Ruth. It ended with Alex Blandino failing to check his swing on a two-out, two-strike fastball from Josh Hader.
“And he went around, that’s a strikeout, and that’s your ballgame,” Brennaman said without adornment.
Brennaman had intended to quietly retire after the season. He agreed to a farewell season that would allow fans and teams to show their appreciation and celebrate a career with so many calls: Aaron’s 714th, three World Series titles and Rose’s record-setting hit No. 4,192 among the most memorable.
In Cincinnati, he was as big as the game itself.
“I first got to hear him when my dad was traded here,” said Reds manager David Bell, the son of Buddy. “I was in high school. Listening to those games was the most important thing in my life. It was 3 hours of escape. He made it really matter.”
After his radio sign-off, Brennaman was brought to a stage on the mound for final tributes as fans filed onto the field.
“Thank you so much for coming today,” he said. “Thanks for your love. Thanks for your loyalty. And thank God you call Cincinnati home like I do. I love you all.”
___
More AP MLB: https://apnews.com/MLB and https://twitter.com/AP_Sports