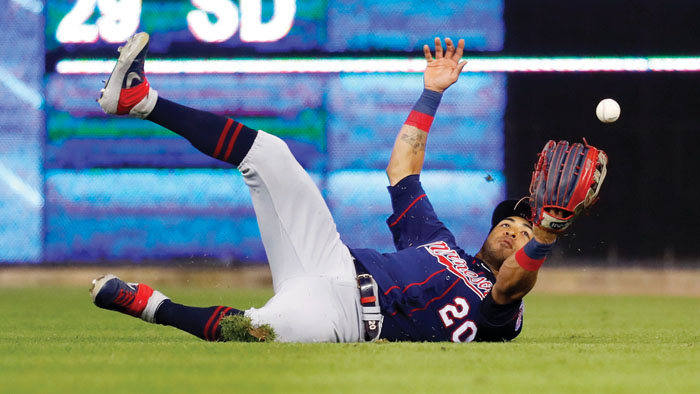 By NOAH TRISTER AP Baseball Writer
DETROIT (AP) — The decade of the 2010s will end the way it started — with the Minnesota Twins atop the AL Central.
Luis Arraez and Eddie Rosario homered, and Randy Dobnak allowed one hit in six sparkling innings to lead Minnesota to a 5-1 win over the Detroit Tigers on Wednesday night. The Twins later clinched the division title when Cleveland lost to the White Sox in Chicago.
It’s the first division title for Minnesota since 2010 and will be only its second postseason appearance since then. The Twins (98-60) have their highest victory total since the 1970 team also won 98 games.
Minnesota wrapped up its win over the Tigers well before the Chicago-Cleveland game ended. That game was on television in the Minnesota clubhouse, where the Twins ate, played cards and waited calmly for a possible celebration.
The previous decade was much more successful for Minnesota, which won the division in 2002, 2003, 2004, 2006 and 2009. That run abruptly came to an end after the 2010 title. Now the Twins are back on top, with an offense that is tied for the major league lead in home runs with a record 299.
Dobnak (2-1) allowed no scoring after an unearned run in the first. Arraez hit a two-run homer in the seventh off Drew VerHagen (4-3), who had combined with Daniel Norris to shut out the Twins until then. Nelson Cruz added an RBI single in the eighth, and Rosario’s two-run shot that inning made it 5-1.
Miguel Cabrera lumbered around from first to score the game’s first run on Jeimer Candelario’s double. The 36-year-old Cabrera, playing for the first time since Friday, was able to slide home just ahead of the relay. Cabrera had reached on an error by shortstop Jorge Polanco.
Norris went three innings for the Tigers, allowing two hits and striking out five. VerHagen relieved him and pitched 4 1/3 innings.
The Tigers (46-111) are assured of baseball’s worst record and the No. 1 pick in next year’s draft.
In addition to his home run, Rosario added a terrific catch in right field on Willi Castro’s sinking line drive in the eighth. The ball popped in and out of Rosario’s glove, but he was able to reach up and secure the ball with his bare hand while sliding across the grass. Then he casually threw the ball back in like it was no big deal.
BIG WEEK
Dobnak is getting married Saturday in Maryland. His week is already off to a good start.
“This is definitely going to be, easily one of the wildest weeks of my life,” he said. “Just to go out there and give our team a chance to win tonight was something that I was really looking forward to do, and luckily things turned out well for us.”
BIRTHDAY BOY
Baldelli did his postgame interview with what looked like icing on his face. It was his 38th birthday.
“I got my face thrown in the cake, which is perfectly fine by me,” he said.
TRAINER’S ROOM
Twins: RP Sam Dyson is out for the season after having shoulder surgery Tuesday. … C Mitch Garver (right hip) played for the first time since Sunday and struck out four times. … 3B Marwin González (oblique tightness) missed a second straight game.
UP NEXT
Twins: Minnesota had not yet announced a starter for Thursday’s series finale at Detroit.
Tigers: Jordan Zimmermann (1-12) takes the mound in Detroit’s home finale.
___
Follow Noah Trister at https://twitter.com/noahtrister
___
More AP MLB: https://apnews.com/MLB and https://twitter.com/AP_Sports