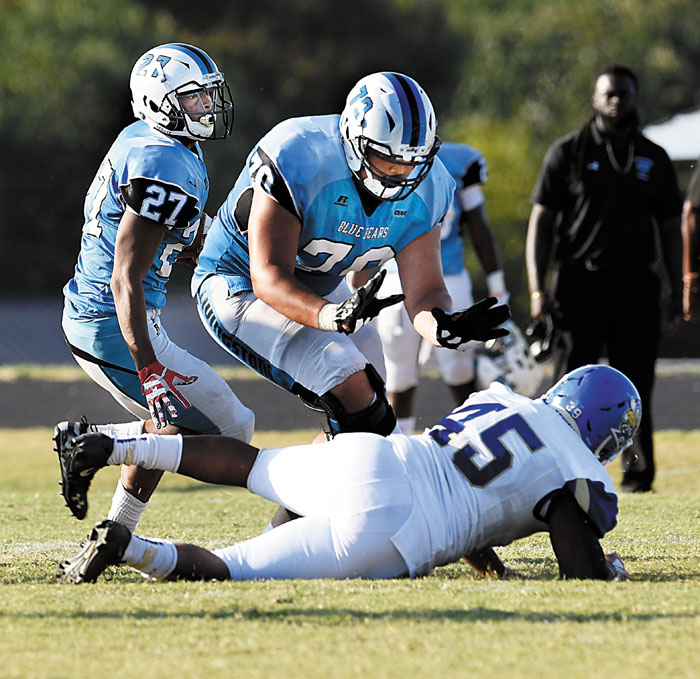 SALISBURY — If you picture in your mind a classic offensive tackle, he probably looks like Jason Monroe.

The 6-7, 320-pound Monroe, a red-shirt sophomore, takes pride in the job he and the rest of the offensive line are doing for the 3-0 Livingstone Blue Bears.

No one would argue that the team’s schedule has been favorable to the this point, but the Blue Bears are still going out and doing what they’re supposed to do. Livingstone has defeated Clark Atlanta (24-13), Elizabeth City State (27-16) and Allen (21-7). It should also be favored this Saturday, playing the 0-3 Lions of Lincoln University (Pa.).

Last week, against Allen, the Blue Bears amassed 507 total yards, 277 on the ground and 230 more on the right arm of quarterback Miles Hayes. Monroe and his mates did such a good job of pass blocking, Hayes had time to complete 27-of-30 throws — two for touchdowns.

The offensive line also paved the way for Tyrell Baldwin, a newcomer at running back, to gain 108 yards on 16 carries. Senior back Andrew Faraimo added 89 more yards on the ground and scored a TD.

In its first three games, Livingstone’s offense is averaging 443 yards, 20 first downs and 24 points per game.

“We take pride in the dirty work,” Monroe said, about playing on the offensive line. “It feels good to know that the quarterback is back there and it’s your job to keep him from being touched. And we have a good corps of running backs and we know that who’s ever back there, we’ve just got to make the hole and he’ll hit it.”

“We don’t miss a beat when those guys come in,” Monroe said, about Schein and Maddox.

Monroe said that the OL dominated the line of scrimmage last week against Allen, and the game statistics back up that claim.

“We gave Miles plenty of time to pass,” said Monroe. “Pass blocking is reading the defensive man because we both are going to work a move and whoever wins, wins. But with run blocking, that’s when you’ve got to show your dominance — just be the stronger guy.”

Monroe arrived from Gainesville, Fla., in 2017, a 350-pound freshman from Eastside High School. He red-shirted that first fall in Salisbury, making him a sophomore on the field. In the classroom, Monroe is a junior, majoring in sports management.

Obviously, growing up in Gainesville, Monroe is a University of Florida Gators fan, and once upon a time, had dreams of playing in the Swamp.

“Yes, it was a dream to go there, but it wasn’t meant to be,” said Monroe. “But I chose Livingstone and this is my team now.”

Livingstone coach Daryl Williams has seen Monroe grow as a person and athlete.

“He’s doing a good job for us,” said Williams. “The red-shirt year really helped him. He bought into the program and has been a great leader, helping out the younger guys. He did a great job last spring, losing weight and coming back this season in tip-top shape.

“He’s given up very few sacks on that left side,” continued Williams. “I look forward to him continuing to be a leader on the offensive line. He was quiet when he first arrived, but he’s growing up and becoming more vocal. He’s developing into a good football player.”

Monroe was slowed last year by a knee injury but the meniscus surgery was successful and he’s full strength now.

Monroe remembers that it took a while to get used to being away from home, where it was just he and his father. Monroe’s mother died at a young age.

“I had spent 18 years in Gainesville and then came here,” added Monroe. “But, it’s been a cool experience. It took me out of my comfort zone. I’m from Florida and it took me a while, but now, I used to North Carolina.

“I’m just happy to be at Livingstone and playing for Coach Williams,” continued Monroe. “He’s a good coach. He tells you real stuff and he’s going to try to get the best out of you.”

Livingstone defeated Lincoln last year at home, 30-0. The Lions have lost their three games this year, giving up at least 50 points each time out — a combined score of 166-31.

With that in mind, Monroe and his teammates are not taking anything for granted.

“We just put our hard hat on and do our job day, in and day out,” he said. “I’m a little biased, but I think our O-line is one of the best in the CIAA. We were young last year, but this season, we’re coming together. We’re getting it rolling.”

NOTES: The Blue Bears are leaving today for Lincoln University, a seven-hour drive from campus. Lincoln is just 15 minutes from the Maryland state line and an hour from Philadelphia. … When Monroe was a senior at Eastside High School, his quarterback, Anthony Richardson, was a freshman. Now a senior, Richardson has committed to stay at home and play at Florida.