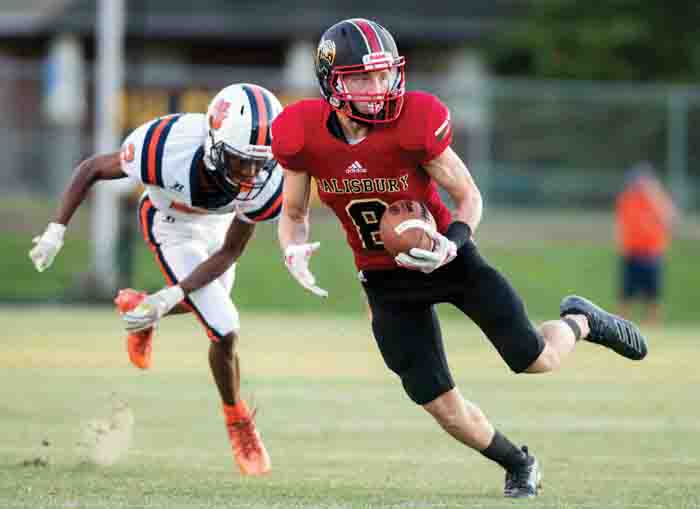 SALISBURY — West Rowan star Jalen Houston has been a running back the past two weeks, so the county receiving title may be up for grabs.

For a player from the traditionally run-heavy Hornets to lead the county in pass-catching is highly unusual, but Taylor has accounted for 77 percent of Salisbury’s receiving yards.

“He’s good with the ball in his hands whether it’s on a reception or a return,” Salisbury head coach Brian Hinson said. “He doesn’t look super-fast, but he is fast. And he has the ability to make himself skinny, make a quick move and make a guy miss.”

“We’re going to run the ball a lot, and we know that,” Taylor said. “So most of the time my job is to try to help out the running backs with a block on the outside. As far as all the different quarterbacks, it’s been an adjustment for the receivers, but the quarterbacks are making adjustments, too.”

Taylor had nine catches for 115 yards and caught his first touchdown of the season on a vertical route when Salisbury beat Carson in its second outing.

Taylor’s second touchdown of the season came Friday in Salisbury’s game at West Davidson. The Hornets were favored by 24 points and expected to win by even more, but turnovers are the great equalizer. Salisbury lost three fumbles. A Salisbury fumble led to a 44-yard field goal by the Green Dragons. and West Davidson took a 3-0 lead.

“It was one of those nights when we played pretty amazing between the 20s,” Taylor said. “But we turned it over and we were down. We needed a play.”

Taylor made that play to put the Hornets ahead 7-3 at halftime.

Salisbury was on its 45. Taylor was lined up on the right side and ran  a dig route. He made several quick strides to midfield before slicing laterally right-to-left at a 90 degree angle, drifting right along with quarterback Jabril Norman. Norman saw him and delivered the ball, and Taylor accelerated past the defense. As he reached the sideline, he shoved a defender off him, made a spin move and won a sprint to the end zone.

It probably should’ve been a nice gain of 10 or 15, but Taylor got a lot more. He turned it into a 55-yard touchdown. That’s what good receivers can do.

“Just a basic shallow route, but Jabril threw a nice ball that I was able to catch it without slowing down,” Taylor said. “He improved his throwing a lot from the Thomasville game when we were all kind of struggling and adjusting to not having Vance Honeycutt. Once I had the ball, instincts took over, and I got past those tacklers.”

Taylor also caught a vertical from Norman for about 25 yards and finished Friday with five catches for 91 yards. He accounted for 100 percent of Salisbury’s receiving yards.

Salisbury rushed for 250 yards against West Davison, with McLean, Norman and freshman JyMikaah Wells doing the pounding. Taylor did a nice job of blocking on the outside. He even had a pancake block.

“He’s gotten more physical in the last year and he is getting some good blocks for us,” Hinson said. “He’s not as strong of a blocker as his brother (Will) was, but he’s the more dangerous of the two with the ball in his hands. He showed flashes last year, and now he’s become more consistent.”

As far as his personality, Hinson never has to fire Taylor up.

“He’s an emotional player  who will talk a little bit and we have to put the reins on him, at times,” Hinson said. “But I’d always rather have that kid that you have to pull back than one that you’ve got to prod constantly to go hard.”

Hinson is aware opposing teams will start paying more attention to Taylor moving forward, but the Hornets will counter by finding more creative ways to use him. Salisbury also should get some important offensive pieces back very soon.

“It’s been a fun season,” Taylor said. “I worked a lot in the off-season, hoping for a better role. It’s paid off.”

Salisbury plays at Lexington (1-3) on Friday.