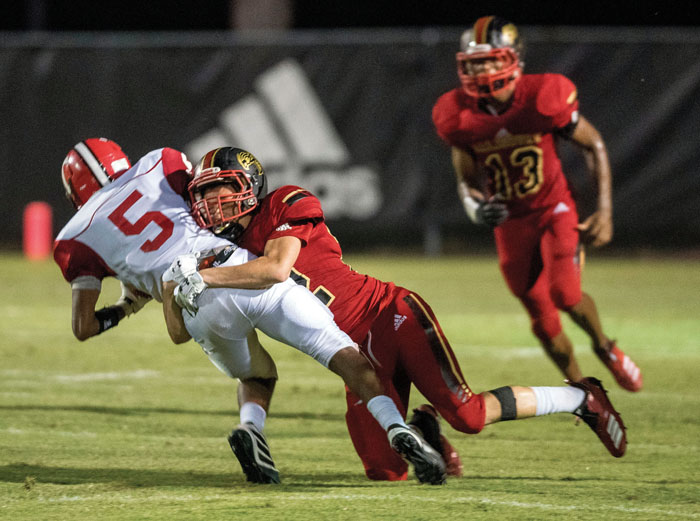 While Salisbury’s margin of victory at West Davidson — 14-11 — was shockingly thin, it actually was business as usual for a Salisbury defense that is allowing 4.5 points per game and 33.5 rushing yards per game.

West Davidson averaged about 1 yard per rushing play and made only two first downs. West Davidson did score a touchdown — the first offensive TD against Salisbury this year — by fooling the 10th-ranked Hornets (4-0, 2-0) with some double-pass trickery. Almost all of West Davidson’s passing yards came on that single play.

Back Mike McLean is consistent. He headed to Tyro averaging 123 rushing yards  per game — and got 123 more.

North Rowan (2-3) will be trying to clean up breakdowns in the defensive secondary this week. East had two aerial touchdowns, although North rallied to win the game 20-16.

“We’ve got some inexperienced guys in the secondary and we had safeties getting caught peeking in the backfield and corners getting turned around,” North head coach Ben Hampton said.

North Rowan is likely to aid its defensive stats on Friday when North Moore visits to start play in the 1A Yadkin Valley Conference.

In six meetings with North Moore, North Rowan has outscored the Mustangs 303-21, with four shutouts.

After a very slow start, North Rowan back Malcolm Wilson, who has been offered by The Citadel,  has moved up to fifth in the county in rushing yards and fourth in receiving yards.

Caelan Stinson, a DB, who made 10 tackles in the loss at Lexington, had another active game against East on Friday. Big North defensive end Brandon Jefferson made some plays against his former East teammates and did the kicking. Jaharion Graham blocked a field goal.

The Cavaliers are closing in on the 400th victory in school history. The win at East was No. 398.

Hampton logged his 35th coaching victory on Friday. He’s not far behind Avery Cutshaw (38) for third on North’s all-time wins list. Of course, it will take a while to catch the top two — innovator Roger Secreast (108) and Hall of Famer Larry Thomason (125).

Receiver Vincent Jones has become a go-to receiver for East since Cooper Wright went down with a collarbone injury.

Jones made two TD grabs, including a 44-yarder, in the loss to North Rowan and is tied for the county lead with four.

Freshman Cole Eagle kicked his third field goal and is tied for the county lead.

Former Independence receiver Qhimari McCall made two key catches for the Mustangs on their fourth-quarter drive that nearly pulled out the game.

Quick defensive end Tayron Frost was hard for North Rowan to block and had several tackles for loss.

Logan Forbis is tied for the county lead with six TD passes.

East travels to West Stanly Friday, a program it hasn’t faced since 2006. East broke a 17-game losing streak in 2004 when it beat West Stanly, but that’s the only time the Mustangs have ever defeated the Colts.

West Rowan could easily be 4-1, instead of 2-3, but the Falcons, had eight turnovers in losses to Cox Mill and A.L. Brown to negate a lot of grinding, physical work at the line of scrimmage.

West has run the ball an extraordinary amount the last two weeks —  56 times in the win against Davie and 57 times in the loss to the Wonders.

West played without injured Michael Gonsalves, the county’s No. 4 rusher, against A.L. Brown, but there was still success on the ground. Jalen Houston had a career-best 164 rushing yards against the Wonders, while Cayleb Brawley set a personal high for carries with 25 and contributed 81 rushing yards.

Houston has three TDs this season and 35 for his career. The only active player in the county who has scored more touchdowns is North’s Wilson, who has 41.

West is off Friday. Their next game will be against Concord.

The Cougars (1-4) welcomed Alex London back from a concussion and he turned in his best game of the season with 169 passing yards in a 34-14 loss at North Stanly that was played on Saturday afternoon.

Receiver Jake Harris had a career game at North Stanly with eight catches for 73 yards. He caught his fourth TD pass and is tied for the county lead.

Harris will become an even more important target for the Cougars with AJ Jackson (collarbone) out for the season.

Safety Connor Floyd, who transferred to Carson from Knoxville, Tenn., made his second interception and is tied for the county lead.

Aaron Bradshaw made his first interception.

Zeb Burns made an impact in Carson’s passing game with four catches for 79 yards.

Carson has an important matchup with North Iredell on Friday.

After that one, the banged-up Cougars figure to be serious underdogs in every game.

Freshman running back Darrion Cuthbertson was a bright spot for South Rowan (1-3) in  the 42-14 homecoming loss to Ledford.

Cuthbertson had five carries for 32 yards.

“He went in there, tried his best and did some good things for us,” South coach Daniel Yow said.

“They rival some small colleges,” Yow said. “We just couldn’t block them.”

Nathan Chrismon scored on a 2-point conversion and still narrowly leads the county in scoring with 34 points.

Back Brayden Garrett is also among the county scoring leaders with 18 points on three TDs.

Normally elusive quarterback Drew Huffman was running for his life against the Panthers. Sacks saddled him with minus-44 rushing yards for the night.

Kennedy scored his first two touchdowns of the season.

Jakhiry Bennett, who has been the primary running back, is averaging 9 yards per carry for the Wonders and will test Davie’s defense on Friday.

A.L. Brown (2-1) doesn’t have a passing touchdown in its first three games.

Davie has been 4A a long time, while A.L. Brown has usually been 3A, so the schools haven’t played often over the years.

A.L. Brown at Davie (3-2) is an endowment game, so only NCHSAA passes will be honored.

With Davie’s top two backs out, sophomore DeVonte Lyerly made a stunning varsity debut with 217 rushing yards in a 31-28 loss to South Iredell.

Davie played short-handed against South Iredell, but the result was still a shock. South Iredell had been demolished in its two previous contests.