From orphan in China to playing golf with the pros 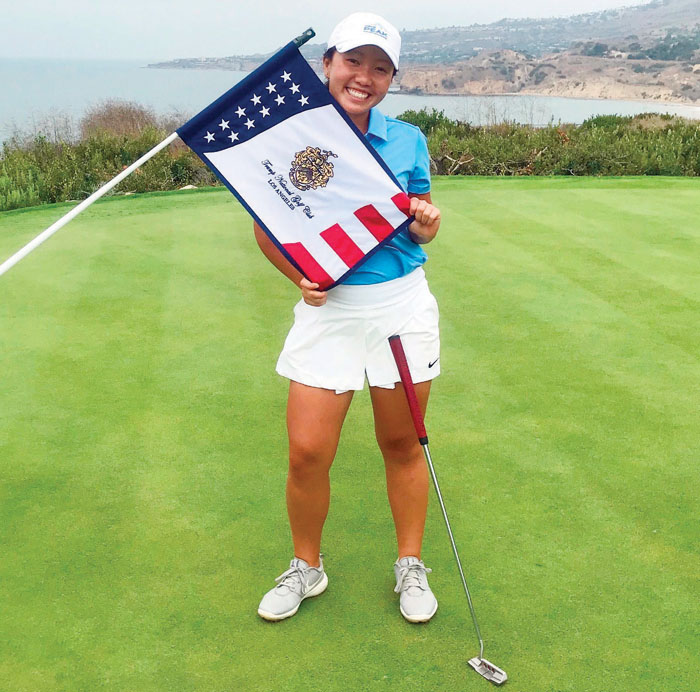 This Aug. 23, 2019, photo provided by Greg Borchers shows Kayli Lucas posed on the 18th green at Trump National in Los Angeles, where she was part of an elite group of juniors from The First Tee to spend a day with Nick Faldo. Kayli's next stop is to play with pros this week at Pebble Beach in a PGA Tour Champions event. (Greg Borchers via AP)

Kayli Lucas is headed to Pebble Beach to play in a PGA Tour Champions event, a dream week for a 17-year-old girl from Tennessee who knew nothing about golf until a friend from church invited her out for a lesson at The First Tee.

She liked how the club felt in her hands. Like so many others brought to golf, she found that the greatest appeal was the individual test to get better.

“I’m goal-oriented,” she said. “I wanted to prove to myself how far I can go on my own.”

How far she can go?

It’s how far Kayli already has come that makes her appearance in the Pure Insurance Championship so amazing.

Her mother calls the trip to Pebble Beach a “once-in-a-lifetime deal.” Kayli was among 78 participants from The First Tee chapters around the country who were selected to compete alongside PGA Tour Champions players like Bernhard Langer and Mark O’Meara, Vijay Singh and Davis Love III.

But then, everything about Kayli is once in a lifetime.

For starters, she doesn’t know exactly where she was born, or even when. She was an infant when she was found outside an equipment factory in Nanjing, China, and taken in as an orphan. That’s about the time Lisa Lucas showed up as part of a 20-month process to adopt a baby girl.

The orphanage sent her a picture, and Lucas could see in the baby’s eyes something was not quite right. No matter. She wanted her. When they arrived in Nanjing and switched the girl out of her clothes, her entire body was covered with scabies, which had led to a staph infection. Lucas said the baby was rushed to a hospital.

“They said two weeks longer and I would not have had my child,” Lucas said. “She’s a miracle all the way around. She was about 9 months when we got her and from lack of human touch, she could barely hold her head up. Two weeks before we left, she was sitting up on her own.”

Her muscles were underdeveloped. She had a bald spot in the back of her head through elementary school.

Her mother waited until she was old enough to understand that she was born in China and was very sick, that they have no idea about her birth parents and never will. The orphanage had a rough idea of Kayli’s age when they found her, so Lucas chose Oct. 14 as her birthdate for the official record.

“I’m not brought up in an Asian-oriented household. I don’t necessarily think about it,” Kayli said. “I don’t think I fully understood it until five years ago. I never Googled the city where I was found, or born, until a school project. We had to do an autobiography.”

Hers, no doubt, was different from her classmates.

Lucas remarried and moved to Gallatin, about 30 miles northeast of Nashville. She wanted her daughter to be more active, whether that was gymnastics or something else. Her friend invited her to The First Tee, and Kayli asked her stepfather, Greg Borchers, to at least show how her how to swing a club before her first lesson.

Josh McCade, the executive director of The First Tee of Tennessee, could tell she was different. Sure, he heard enough conversations over the years to piece together Kayli’s story. What he saw was someone who made the most of opportunities, and golf was no different.

“She had this eagerness to learn the game of golf,” McCade said. “That was something you could tell. After class, she’d be hitting balls on the range, putting and chipping on her own. You can separate kids from who’s there because they want to be there. She has a great spirit about herself.”

Kayli says Borchers has invested the most time in her game, how to treat the course and manage her game. The teachers at The First Tee and Gallatin High have honed her swing. “Without them, my swing would be a hot mess,” she said with a laugh.

She plays on the high school team. Her best score — not in competition — is 2-over par for 18 holes. She is looking into colleges in the Midwest for next year and deciding how much she wants golf to be part of it.

First, there’s a trip to Pebble.

Kayli was in Los Angeles last month for the CoBank Peak Performers , one of nine First Tee participants who spent a day with six-time major champion Nick Faldo at Trump National along the Pacific. “I was super nervous and did not hit the ball well,” she said with a laugh.

She has not yet found out her partner for the Pure Insurance Championship.

Her mother has never been to California, and she’ll be in the beauty of the Monterey Peninsula watching a girl she first saw as an infant in an orphanage in China, with no guarantees where it all would lead.

“I’m just so thankful to have her,” Lucas said. “I know people say I’m a blessing to her life. But she’s blessing to mine.”