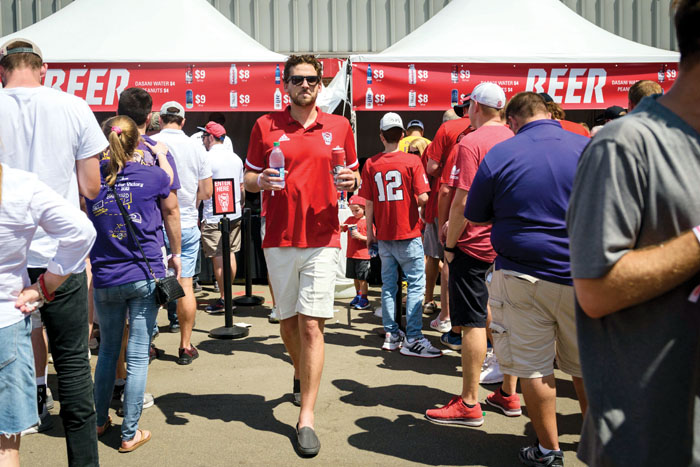 By HANK KURZ Jr. AP Sports Writer
There’s a growing trend at Atlantic Coast Conference football games: alcohol sales to the general public.
Now everyone can enjoy their beverage of choice at most ACC stadiums, not just boosters and donors.
Many ACC schools have made alcoholic beverages available in suites and special club areas for years. Some schools started selling beer and wine at concession stands before this year, but now at least four more schools — Virginia, Florida State, North Carolina and North Carolina State — have joined in the fray.
The ACC does not have a league-wide policy regarding alcohol sales, and no programs appear to have had issues because of such sales.
In North Carolina, legislation was passed to give public universities the same rights and options as private schools.
North Carolina State House Majority Leader John Bell and Sen. Rick Gunn, both Republicans, cited improving the fan experience at North Carolina and North Carolina State games and allowing schools to generate more revenue as factors in their bills, which were signed into law by Gov. Roy Cooper in June. Wake Forest had been selling beer and wine since 2016 and Duke was selling it in suites.
Gunn told The Associated Press he thought it was unfair that fans in club suites had access to drinks while the general public did not.
“Why would they not be entitled to the same experience, even if they can’t afford to be in a luxury box or premier seating?” Gunn asked.
At Virginia, two “beverage gardens” open 90 minutes before kickoff and adults of drinking age who wish to partake are given a wristband that allows them to buy two beers, glasses of wine or hard cider at a time, but only four on any given day. And they must remain within the beverage garden while consuming their drinks.
Athletic director Carla Williams said the decision to sell alcohol beverages at Virginia was the result of “survey feedback we received during and after the 2018 season” and was just one of several perceived fan experience improvements made. Adult beverage sales at Cavaliers home games stop at the end of the third quarter.
Florida State does something similar.
There are two stations inside Doak Campbell Stadium that sell alcohol, and fans must consume their drinks in those designated areas. The stations also close at the conclusion of the third quarter. The school also has three stations outside the stadium, and they close 10 minutes prior to kickoff.
Data regarding alcohol sales was not made available by Virginia or Florida State, but the sales numbers at North Carolina and North Carolina State show that their changes in policy have been very well received. Alcohol sales greatly outpace soda sales, and UNC has had consecutive concession record sales for home games.
But the numbers aren’t swaying some schools. Clemson not only stands out as the No. 1 team in the country, but for its stance on alcohol sales.
“We continue to monitor the landscape and best practices, but do not have any plans to sell (or propose to sell) alcohol in our venues,” athletic spokesman Jeffrey Kallin said Monday, echoing the position of athletic director Dan Radakovich, who addressed the issue before the start of the 2018 national championship season.
Virginia Tech, like Duke, only makes alcohol available in suites, while Syracuse has sold alcohol to fans since the Carrier Dome opened in 1980. Boston College experimented with alcohol sales two years ago, made it part of concessions last year and athletic director Martin Jarmond said the results have been very positive.
“Our alcohol incidents decreased from the previous year, similar to what has been observed nationally at other schools,” Jarmond said.
Pittsburgh began selling alcohol stadium-wide in 2016, and designates a portion of the funds from those sales to drug and alcohol education programs.
Louisville has a unique situation with its concessionaires selling beer, wine and bourbon — a legendary Kentucky staple.
Jeff Spoelker, Louisville associate athletic director for business and finance who oversees Cardinal Stadium, said vendors are trained to identify people who have been over-served, and that alcohol is prohibited, as in many other stadiums, away from designated family seating areas. But, he added, no system is perfect.
“We have our issues like every other school here and there with a fan who gets out of control, but that’s common,” he said.
Miami, which like Pittsburgh plays in a stadium that is home to NFL games, allows fans to take drinks to their seats, but only two at a time.
Gunn, one of the sponsors of the bill that became law in North Carolina, said he spoke with on-site law-enforcement officers at UNC games this year— both of which he attended — and they reported no major problems since the sales began. Bell, the other sponsor of the law, received a different kind of feedback from fans attending an East Carolina home game.
ECU, a member of the American Athletic Conference in Greenville, North Carolina, also began selling alcohol to the public this season as a result of the bill.
“So far it’s actually been very smooth,” Bell said. “I will tell you from a legislative standpoint it is one of the most popular bills I’ve ever done. Even when I was at the ECU game on Saturday. a couple of my friends were sitting there drinking a beer at the ballgame, and sent me a picture (via text message) that said, ‘Thank you.'”
___
AP sports writers Aaron Beard in Chapel Hill, North Carolina, Joedy McCreary in Durham, North Carolina, John Kekis in Albany, New York, Gary Graves in Louisville, Kentucky, Will Graves in Pittsburgh, Jimmy Golen in Boston, Tim Reynolds in Miami, Bob Ferrante in Tallahassee, Florida and Pete Iacobelli in Clemson, South Carolina contributed to this report.
___
Follow Hank on Twitter: www.twitter.com/hankkurzjr
___
More AP college football: https://apnews.com/APTop25CollegeFootballPoll and https://apnews.com/Collegefootball and https://twitter.com/AP_Top25

From orphan in China to playing golf with the…