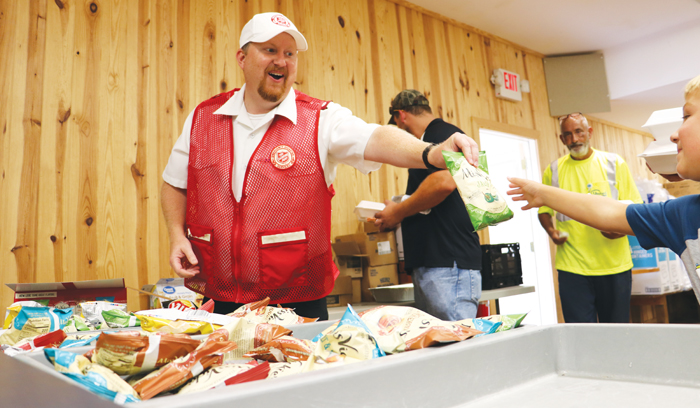 Maj. Karl Dahlin, commanding officer of the Salvation Army in Salisbury, passes a bag of chips to a young resident of Ocracoke Island while he mans a feeding station set up on the island after Hurricane Dorian. Submitted photo

SALISBURY — The Salvation Army of Salisbury played a role providing a helping hand and a listening ear to coastal residents and first responders dealing with the effects of Hurricane Dorian.

After Dorian lashed the Outer Banks in early September, Major Karl Dahlin, commanding officer of the Salvation Army of Rowan County, was called to serve residents on Ocracoke Island in Hyde County.

“The Salvation Army is ready to serve, wherever and whenever we are needed,” Dahlin said. “When I got the call to go to the coast, I was ready to serve our mission to preach the gospel and meet human needs in the name of Jesus Christ.

“It a humbling experience to show people the love of our Lord as they worked to rebuild their lives. ”

At the peak of service along the Outer Banks, five Salvation Army mobile feeding units and crews of trained Salvation Army officers, employees and volunteers served meals and drinks and provided spiritual care on Ocracoke Island and in Hatteras Village and Dare County.

Dahlin served as the logistics chief for Salvation Army’s response on Ocracoke, coordinating emergency feeding of more than 8,600 meals and obtaining and managing the resources and equipment necessary to run the disaster relief operation.

“Days into our response efforts to Dorian, the island community of Ocracoke took most of my attention” Dahlin said. “It was quite a challenge to serve a disaster site that was accessible only by two-and-a-half-hour ferry rides.

“We made it work by forming a coalition with Baptists on Mission and the Red Cross. Together, we were able to efficiently ensure that the residents and first responders on the island could get a hot meal.”

Every day across the world, Dahlin added, the Salvation Army is feeding people, meeting one of their most basic needs.

“When disaster impacts communities, the Salvation Army uses its long experience of mass feeding to provide nourishment to people before, during and after the disaster,” Dahlin said.

The organization says it also provided “emotional and spiritual care” to 1,710 people and 9,988 hours of employee and volunteer service.