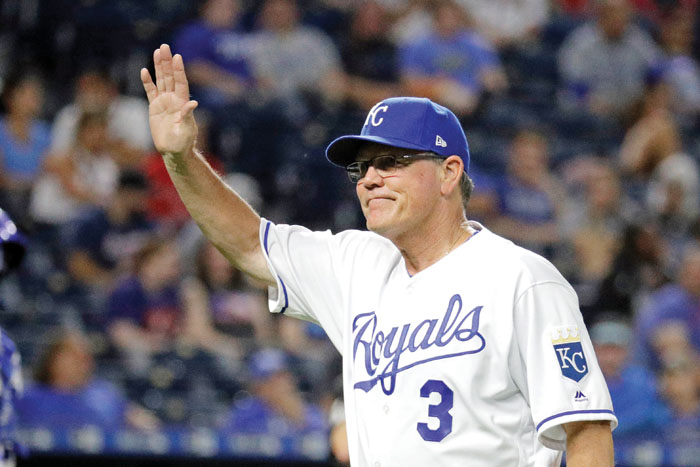 Kansas City Royals manager Ned Yost acknowledges the crowd as he walks to the dugout after making a pitching change during the eighth inning of a baseball game against the Atlanta Braves Tuesday, Sept. 24, 2019, in Kansas City, Mo. Yost announced yesterday that he was retiring at the end of the season. (AP Photo/Charlie Riedel)

By DICK KAEGEL Associated Press
KANSAS CITY, Mo. (AP) — In Kansas City’s first game after manager Ned Yost announced he will retire after the season, the lowly Royals burst to a six-run lead in the first three innings and beat the NL East champion Atlanta Braves 9-6 Tuesday night behind three hits and two RBIs from Nicky Lopez.
Yost, who turned 65 last month, was hired by the Royals in May 2010 and led Kansas City to consecutive AL pennants and the 2015 World Series title, the second in team history and first since 1985. The Royals are 58-100 in their third straight losing season.
Atlanta, assured it will start the NL Division Series at home on Oct. 3, is 96-62. The Braves need to win all four of their remaining games to reach 100 victories for first time since 2003.
Danny Duffy (7-6) allowed three runs and five hits in five innings, improving to 2-1 in his last six starts.
Julio Teheran (10-11) gave up six runs and six hits in 2 1/3 innings. He has lost three straight starts, giving up 14 earned runs in 11 1/3 innings.
Hunter Dozier hit a sacrifice fly in the first, and the Royals broke open the game with a five-run third that included Alex Gordon’s RBI single, Ryan O’Hearn’s sacrifice fly and a two-run double by Bubba Starling, who went to third on the throw home and scored when catcher Brian McCann’s throw to third went into left field for an error.
Francisco Cervelli and Ozzie Albies homered for the Braves.
Atlanta center fielder Ronald Acuña Jr. was removed after two innings as a precaution because of right hip tightness. Acuña leads the Braves with 41 homers and is three steals shy of 40.
TRAINER’S ROOM
Braves OF Ender Inciarte, out since Aug. 10 with a right hamstring strain, is expected to test his leg by running the bases Wednesday.
UP NEXT
Braves RHP Mike Soroka (13-4, 2.60 ERA) starts Wednesday’s finale of the two-game series against LHP Mike Montgomery (3-9).
___
More AP MLB: https://apnews.com/MLB and https://twitter.com/AP_Sports