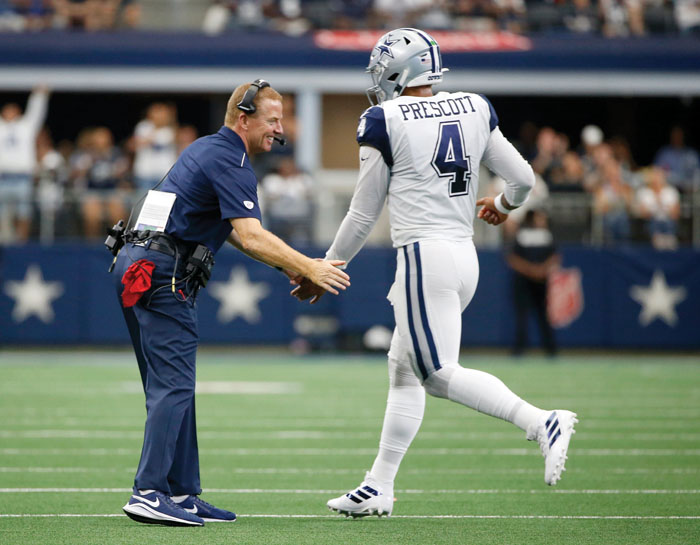 Dallas Cowboys head coach Jason Garrett, left, greets quarterback Dak Prescott (4) on the sideline after a Cowboys touchdown in the first half of a NFL football game against the Miami Dolphins in Arlington, Texas, Sunday, Sept. 22, 2019. (AP Photo/Ron Jenkins)

NEW YORK (AP) — Through three weeks, the NFL’s big four are as dominant as ever.

“Their seven-game preseason is over. We’ll find out more about this team in the coming weeks, but they look good.” Charean Williams of Pro Football Talk said of the Cowboys.

For the third consecutive week, New England received 11 of the 12 first-place votes for 383 points in balloting Tuesday by media members who regularly cover the NFL.

“The gamble on Antonio Brown might be the only thing Bill Belichick loses all season,” Newsday’s Bob Glauber said.

“This might be one of Belichick’s best defensive teams ever, which is bad news for everyone else.”

The Chiefs collected the remaining first-place vote and 369 points.

“The NFL has been around for 100 years and we’ve never seen a quarterback begin his career quite like Patrick Mahomes,” said Ira Kaufman of Fox 13 in Tampa, Florida.

“As a result, the Chiefs make opponents cover every blade of grass.”

The Green Bay Packers, also perfect through three games, moved up two spots to No. 5.

The Packers will open Week 4 when they host Carson Wentz and the Philadelphia Eagles on Thursday night.

The Baltimore Ravens slipped a spot to No. 6 after losing to the Chiefs.

The New Orleans Saints jumped three places to No. 7 after their impressive 33-27 win at Seattle in their first game since Drew Brees injured his throwing hand. The Seahawks are the third NFC West team in the top 10, but they dropped four spots to No. 10.

The Minnesota Vikings inched up a spot to No. 8, and the San Francisco 49ers climbed three places to No. 9 entering their bye week after staying unbeaten with a win over Pittsburgh.

The Buffalo Bills, another 3-0 team, remained at No. 11. They host the Patriots on Sunday.

The 37-year-old Roethlisberger left at halftime of a 28-26 loss to Seattle on Sept. 15 after complaining of elbow pain. The team placed him on season-ending injured reserve the following day but has not detailed the exact nature of Roethlisberger’s injury.

Roethlisberger will begin rehabilitation when he returns to Pittsburgh and plans to return to the field in 2020. The two-time Super Bowl winner signed a contract extension in the spring that runs through the 2021 season.

The Steelers, with Mason Rudolph taking over at quarterback, dropped to 0-3 with a loss to San Francisco on Sunday.