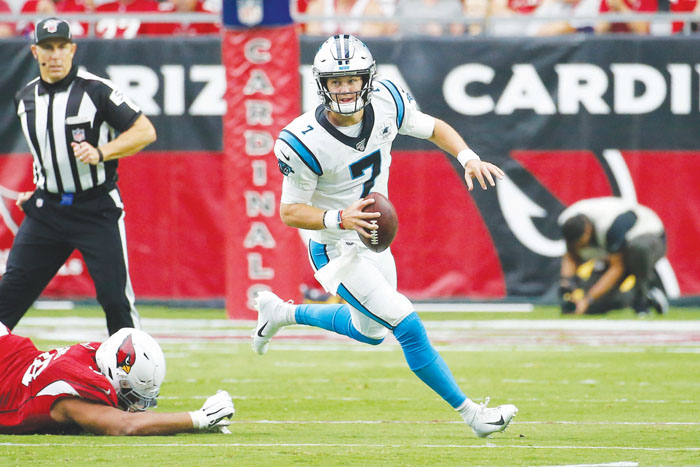 FILE - In this Sept. 22, 2019, file photo, Carolina Panthers quarterback Kyle Allen (7) scrambles during an NFL football game against the Arizona Cardinals, in Glendale, Ariz. Surviving in the NFL as a young quarterback means being able to move. That doesn't mean running as well as Lamar Jackson. Gardner Minshew, Kyle Allen and even Daniel Jones are showing that being able to elude pressure is a must to keep throwing the ball. (AP Photo/Rick Scuteri, File)

It’s an NFL rite each season that young quarterbacks find themselves playing early whether because of high draft status, injuries or simply a struggling team looking for a spark.

Injuries already have forced Gardner Minshew of the Jaguars, Mason Rudolph in Pittsburgh and Kyle Allen of Carolina into the lineup, while the Giants decided the future is now in turning from Eli Manning to Daniel Jones.

They’re all getting their chance to show what they can do with Dwayne Haskins potentially on deck soon in Washington.

They often find themselves behind porous offensive lines or facing defenses that make getting the ball out quickly a challenge. So the ability to extend plays against NFL pressure is the biggest key — even if athleticism comes in a lot of different ways for quarterbacks, according to Jaguars offensive coordinator John DeFilippo.

“There are a lot of guys like Nick Foles, Tom Brady, who aren’t the fastest guys out there, but have tremendous pocket athleticism in terms of being able to throw off-balanced, being able to move in the pocket and keep their feet in the throw,” DeFilippo said.

“Pocket athleticism and playing quarterback in this league is a very huge attribute to have.”

Some of the younger quarterbacks are also quick on their feet. Baltimore’s Lamar Jackson ranks in the top 20 of the NFL’s leading rushers, while Arizona drafted Kyler Murray with the No. 1 overall pick in April for that reason. Patrick Mahomes of Kansas City won the 2018 NFL MVP award by making plays in and out of the pocket.

The New York Giants turned to Jones, the sixth pick overall in April out of Duke, looking to someone who brings more mobility to the quarterback position than Eli Manning. The 38-year-old veteran has only seven career rushing touchdowns and never averaged more than 2.2 rushing attempts a game in any of his previous 15 seasons.

Jones ran for 1,323 yards and 17 touchdowns in his career at Duke, and he debuted Sunday by becoming the first rookie quarterback since 1970 with at least 300 yards passing, two TD passes and two rushing TDs in a single game leading the Giants to a 32-31 win over Tampa Bay.

The rookie ran only once during the preseason, though Giants coach Pat Shurmur said that wasn’t to hide Jones’ legs.

“There was only one call there that was going to become a potential run,” Shurmur said. “Most of the running around were drop back passes where he felt like it was right to scramble.”

Minshew averaged only 2.1 yards rushing at Washington State last season. Now filling in for Foles, Minshew ran for 56 yards on six carries in a 13-12 loss to Houston in the first start of his NFL career, including an 18-yard run on fourth-and-10 that gave the Jaguars a chance at a late comeback. He ran four times for 18 yards in Jacksonville’s 20-7 victory over Tennessee.

Titans linebacker Jayon Brown said Minshew did everything he needed to win. Minshew’s rushing helped the Jaguars (1-2) finish with 88 yards on the ground.

“When the rush lanes were there, he took advantage of it, scrambled and made plays,” Brown said.

Minshew still has some “happy feet” moving a bit too much in the pocket, and DeFilippo would like the sixth-round pick to slide a bit earlier too.

“We’ve talked about that,” DeFilippo said. “That just comes with experience and playing time.”

With Cam Newton recovering from a mid-foot sprain, the Panthers are keeping Allen, who went undrafted in 2018 out of college, at quarterback for his third career start. Allen averaged only 1.3 yard per carry in college at Texas A&M and Houston with three TD runs. Allen had three rushes in Carolina’s 38-20 win at Arizona and finished with minus-1 yard.

Carolina coach Ron Rivera has no issues with Allen’s legs.

“Well I think he has just enough mobility to get him out of some situations,” Rivera said. “Once he got a feel for things, he was able to kind of walk away —  well I shouldn’t say walk — move away from the pressure, and he handled that very well.”

Surviving to take the next snap or play the next game is what matters most.

WITH TRUBISKY DELIVERING, BEARS GET RELIEF IN LOPSIDED WIN

LAKE FOREST, Ill. (AP) — Never mind the opponent, the Chicago Bears can breathe a little easier following a victory that was every bit as cathartic as it was dominant.

That’s because Mitchell Trubisky finally stepped up after a shaky start to the season in a 31-15 romp at winless Washington on Monday night.

The No. 2 overall pick in the 2017 draft completed 25 of 31 passes for 231 yards and threw his first three touchdowns of the season — all to Taylor Gabriel in the second quarter.

It was a welcome sight for Chicago (2-1), even if he did it against a defense that ranks among the NFL’s worst.

“I really like the fact of how he went into this week and handled this week of practice,” coach Matt Nagy said Tuesday. “It transferred over to the game. In the game, he was just Steady Eddie the whole way. He was very smooth. He never got rattled.”

It wasn’t a perfect performance.

Trubisky got sacked for 14 yards on third-and-9 at the Washington 36 on the game’s opening drive, possibly knocking Chicago out of field-goal range. He underthrew a fade to Allen Robinson in the end zone, and Josh Norman intercepted it near the goal line.

But it was a big improvement after shaky performances against Green Bay and Denver.

The offense scored four touchdowns in the first half, quite a change after Chicago managed just 19 points through the first two games.

“I think we are still growing on offense,” Trubisky said. “I don’t know if I would call it a breakthrough yet, we have to keep growing, and there is room for improvement. If we stick to the process, we will be all right.”

The Bears’ defense continues to dominate and the offense got clicking against a winless team after struggling through the first two games.

Gabriel caught touchdowns of 3, 1 and 36 yards in the second quarter. He wound up with six receptions for 75 yards before leaving in the second half with a concussion.

And rookie David Montgomery ran for 67 yards on 13 carries.

Through three games, Tarik Cohen has yet to make a major impact carrying the ball or catching it.

The speedy and versatile third-year pro has just eight rushes for 16 yards and 12 catches for 82 on the season. He had just four carries for minus-2 yards against Washington and two receptions for 26 yards.

“He’s a playmaker, and you want to try to get guys the ball as much as you can,” Nagy said. “We have a lot of different guys. He could come out one game and have eight catches for 100 yards, and another game not. So that’s the balance.”

Nagy said the knee injury that knocked defensive tackle Akiem Hicks out of the game is not serious, saying he “just got a little bit sore” and should be OK.

He also praised Eddy Pineiro for “kicking through pain” after hurting his right knee lifting weights on Friday. Pineiro — who nailed a 53-yarder to beat Denver the previous week — was 1 of 2 on field goals and made all four extra points.

Nagy wasn’t sure how much time right tackle Bobby Massie will miss after he was a surprise scratch because of vertigo.

Five — That’s how many turnovers the Bears forced after taking the ball away just one time through the first two weeks. That was more like it for a team that led the league in takeaways last year. Newcomer Ha Ha Clinton-Dix had two of Chicago’s three interceptions, running one back 37 yards for a touchdown. And Khalil Mack forced fumbles on his two sacks, with Chicago recovering one.

The Bears host Minnesota on Sunday in a game they can hardly afford to lose if they’re going to repeat as NFC North champions. They dropped the opener to Green Bay at Soldier Field. And a loss to the Vikings at home would put them in a tough spot.

Kansas, others saying NCAA is using them as examples