Marty Brennaman looking at ‘hardest day of my life’ 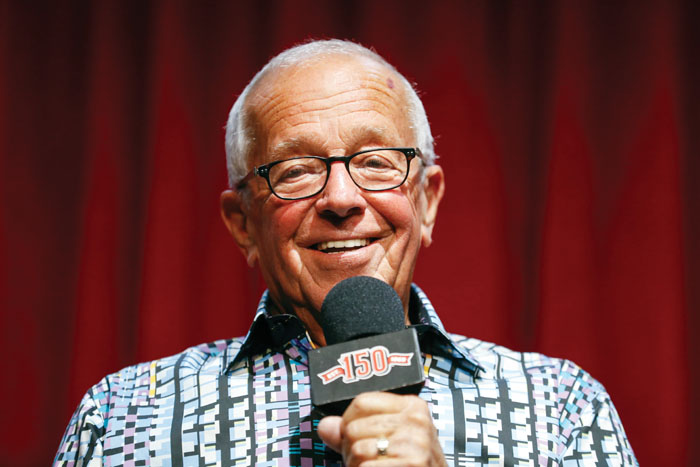 AP Photo/John Minchillo ... Cincinnati Reds Hall of Fame announcer Marty Brennaman speaks during a news conference to discuss beginning his final series before heading into retirement, Tuesday, in Cincinnati. One of Brennaman’s first jobs was calling Rowan County American Legion games in the late 1960s. He still has friends in Salisbury.

CINCINNATI (AP) — A few hours before the start of his final series as a Cincinnati Reds broadcaster, Marty Brennaman was pausing to collect himself at the thought of a final out now clearly in sight.

“Here I go,” he said, forcing a smile that brushed back emotions.

The 77-year-old broadcaster known for his pull-no-punch descriptions and his “this one belongs to the Reds” sign-off settled in Tuesday for his last three days in the booth. After 46 years, Brennaman is retiring — and no, he won’t be coming back to the microphone again. A series against the playoff-contending Brewers will provide a truly final out.

“Thursday will be the hardest day of my life, I think,” Brennaman said, referring to the series finale. “I think that will be a tough one.”

The Reds’ voice since 1974, Brennaman originally intended to quietly retire and fade into private life after last season. He relented and agreed to a farewell season that would allow fans and teams to show their appreciation and celebrate a career with so many calls: Hank Aaron’s 714th homer that tied Babe Ruth, three World Series titles and Pete Rose’s record-setting hit No. 4,192 among the most memorable.

Along the way, he also took on baseball commissioners, Chicago Cubs fans and even Reds players who simply weren’t getting the job done, employing a tell-it-like-it-is style that is slipping away along with the many voices that have been part of the game for a long time. Pittsburgh’s Steve Blass is retiring after the Reds’ game against the Pirates at PNC Park on Sunday, ending his 34-year broadcasting career.

Brennaman is proud that he’s one of eight broadcasters who have spent at least 45 years with only one big league team, something “that means more than anything in the world.” He’s been touched by the many tributes and the countless bins full of fans’ mail thanking him for his years of coming into their homes through transistor radios and car speakers.

He’s also been touched by the tributes from around the league. The Cubs gave him a metal panel from the Wrigley Field scoreboard with 46 — his number of seasons — during a visit last week, doing it low-key because some fans there still smart from his critical comments.

“There were certain parks where it was very emotional for me to leave, and there were other places — and I’m not going to name where they were — but I was thrilled to death to get the hell out of there,” he said. “But I’ve been overwhelmed by that part of it.”

Brennaman hadn’t yet thought about what he’ll say for his sign-off after Thursday’s game. He’ll speak in generalities because he doesn’t want to overlook anyone.

He’s reminded of his last broadcast with longtime partner Joe Nuxhall in 2004.

“We got to the last game and we got to the last out and we went to the postgame show and at that point he said, ‘I guess we have to talk about it, don’t we little buddy’ — that’s what he called me,” Brennaman said. “I said I guess we do. And I couldn’t get through it, I simply couldn’t.”

When he says goodbye to fans on Thursday, Brennaman will be done with baseball broadcasting. He’s open to doing something else — Brennaman has called NCAA Tournament games — but he won’t be at a microphone behind home plate again.

“I made it perfectly clear when I do the Thursday game, that’s going to be it,” he said. “I’m not coming back to do any other games.”

On Friday, when the Reds open their final road trip of the season in Pittsburgh, Brennaman will be playing golf and attending a high school football game in Cincinnati, easing into the next phase of his life.

“I jokingly said that when I call the last out Thursday, I will cease to become relevant in this town,” Brennaman said. “I truly believe I’m going to be a whole lot less relevant, and that’s good with me. I’m fine with that.”

Editor’s note: In one of jobs, Marty Brennaman worked at a radio station in Salisbury, in the late 1960s. Brennaman’s duties included doing the play-by-play for Rowan County American Legion baseball games. He also covered Catawba College games and high school sports. He has visited Salisbury throughout the years and still has friends here.