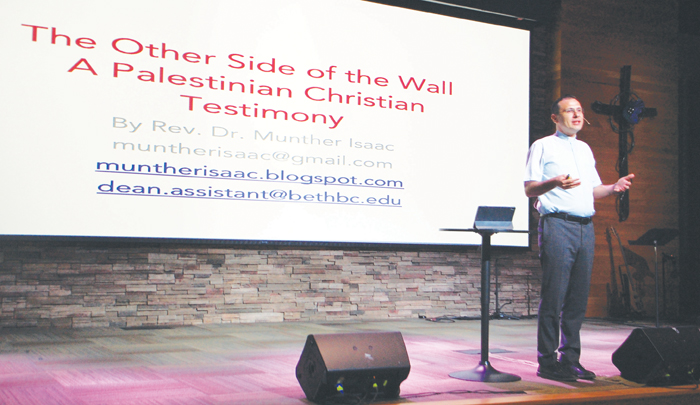 SALISBURY — The Rev. Dr. Munther Isaac, pastor of Christmas Lutheran Church in Bethlehem, preached twice Sunday morning on the parable of the Good Samaritan, concluding that in this well-known story, “Jesus is challenging us to look at people differently.”

What if in the story, the Good Samaritan was a “Good Muslim” from Iran, Isaac asked his audiences, which heard him at two morning services at St. John’s Lutheran Church.

Jesus tells of a man robbed and beaten, who is stripped naked and left “half dead” with no way to determine his nationality or religion. A priest and a Levite pass without assisting the man.

It’s a Samaritan — a people who were despised and hated by Jews — who bandages the victim’s wounds, places him on his animal for carriage to an inn and gives the innkeeper money for his care, saying he will pay more later if need be.

“He was a human being, and helping him cannot be a matter of choice,” Isaac said. “Jesus comes and removes all lines. Everyone is a neighbor, and we are all called to love them as ourselves.”

It’s this message — that we’re all neighbors — that Isaac drove home at the church services Sunday morning and during his talk at a community forum that evening during which he described the daily challenges facing Palestinian Christians.

The covenant is based, among other things, on “our commitment to a world where all know of God’s peace, mercy and justice,” the agreement said.

Both congregations will pursue their commitment to each other through mutual prayer, pulpit exchange, people-to-people connections, “gracious hospitality to one another,” ministry updates, the sharing of theological and biblical insights, amplifying one another’s voices and “resource mobilization.”

“With joy and thanksgiving, we affix our signatures,” the covenant said, and it was signed first by Isaac, then by Woolly at the 11 a.m. service.

Mike Connor, who previously served in a three-month ecumenical accompaniment program in the Middle East, got to know Isaac during that stay, and he heads St. John’s Palestinian ministry team.

St. John’s established a relationship in 2012 with Christmas Lutheran’s former pastor, the Rev. Dr. Mitri Raheb, who has spoken at St. John’s on two occasions. The relationship has kept building with Isaac.

Connor read aloud the terms of the covenant between the churches before the signing.

“Whenever you visit our land, you have a home,” Isaac said after the signing. “We welcome you. … This is just one step.”

Isaac’s talk at Sunday evening’s community forum was a deep dive into the myriad issues facing the Israel/Palestine divide as a whole and, more specifically, the difficulties faced by a dwindling Palestinian Christian population living in an occupied land.

A pastor, author, theologian, teacher and blogger, Isaac borrowed excerpts from a manuscript he is completing titled “The Other Side of the Wall: A Palestinian Christian Testimony.”

Palestinian Christians, who were once a big part of the population in this region, now make up about 2 percent of the people in occupied territories.

“The Promised Land is my homeland,” he said. “The occupation controls every aspect of our lives.”

Palestinians face water shortages, the confiscation of land, checkpoints and travel restrictions and being viewed a second-class citizens who face inequality and injustice, Isaac said.

Unemployment is high, and income is low. Violence is sometimes justified against those “on the other side of the wall.” Holy Land Christians feel ignored and dehumanized, but despite all the challenges and dwindling numbers, they are making considerable contributions, Isaac said.

He noted a third of health care centers in the West Bank are Christian-sponsored and 45 percent of nongovernment organizations are church-related or church-funded.

Isaac said people seem to forget that when Israel was created in 1948, it led to what Palestinians call “The Nakba.”

About 530 Palestinian villages were evacuated or destroyed. Close to 800,000 refugees were created, including almost 50,000 Palestinian Christians. Palestinians lost 78 percent of historic Palestine, and thousands were killed or injured.

Thousands of Palestinian Christians have signed what is considered a landmark document, the Kairos Palestine Document, which calls for a justice that will lead to peace.

That passage goes on to say, “We declare that any theology, seemingly based on the Bible or on faith or on history, that legitimizes the occupation is far from Christian teachings, because it calls for violence and holy war in the name of God Almighty, subordinating God to temporary human interests, and distorting the divine image in the human beings living under both political and theological injustice.”

Isaac stressed that he and others looking for peace are not saying Israel should be destroyed, nor are they saying Israelis should leave the land. He instead turns to the message of love thy neighbor as yourself and the message inherent in the Good Samaritan.

Isaac said he has a hope of a shared land with no walls.

“We must share God’s land and be good stewards of his creation,” he said. “Justice matters to God, and it should matter to us. … It’s time for the church to be part of the solution, because it’s been part of the problem worldwide.”