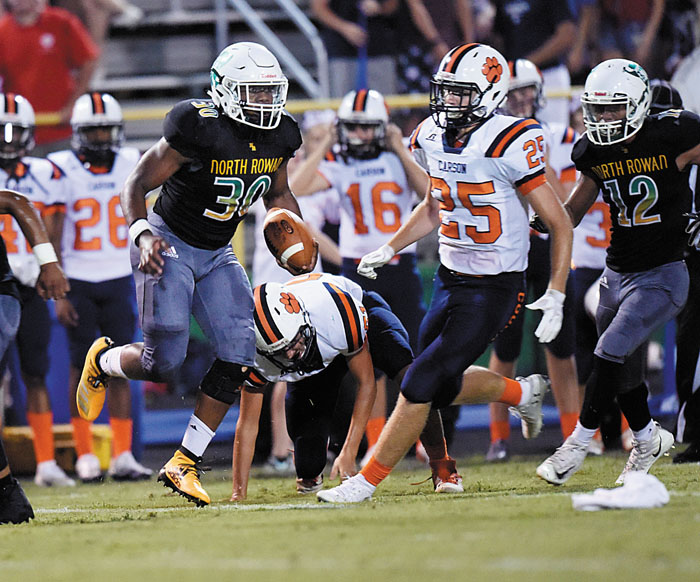 SPENCER — East Rowan had the ball for 11 minutes in the third quarter on Friday, while North Rowan had it for one.

North’s win probability appeared to be around 5 percent as the fourth quarter unfolded with the Cavaliers stagnant offensively, trailing by 10 points and with East driving hard again, but the tide turned, and the Cavaliers won an emotional road game, 20-16.

“There are times when you just have to persevere,” said North linebacker Jordan Goodine, who helped the Cavaliers survive with an extraordinary effort. “All I know is we were really excited when we won.”

Goodine, a senior who has made far more than his share of stops over the years, was in on 23 tackles on Friday, including four for loss. He ripped power and iso plays apart like Superman bending steel cables. He chased down guys sideline to sideline and made tackles on special teams.

He is obviously one of the county’s toughest defensive players, playing at lofty level along with fellow linebacking studs Jabril Norman (Salisbury) and Baiden Suddarth (West Rowan).

At the end of Friday’s game, Goodine was literally a coach on the field, directing freshman linebacker Khalil Davis, telling him where to go and what was coming.

“Khalil got the big pressure on the quarterback when Malachi Turner made the interception that saved the game for us,” Goodine said proudly.

Goodine is built a lot like his father was 30 years ago. A South Carolina native, Rodney Goodine (5-10, 225) was a four-year starter at linebacker for Catawba and a first-team All-America pick in 1988 and 1989. He’s now North’s defensive coordinator.

Jordan’s older brother Javin was an excellent linebacker for North. Now it’s Jordan’s turn to carry on a family tradition that includes tackling a lot of people while excelling in the classroom.

The weight room has been Jordan’s best friend.

“Jordan made a valiant effort to change his body between his sophomore and junior seasons,” North head coach Ben Hampton said. “He not only got a lot stronger and a lot more physical, he gained quite a bit of foot-speed. He’s 225 pounds now and he’s moving pretty good. He’s a force out there, just flying around all over the place.”

Goodine caused a fumble in the opening-night loss to Salisbury. He had three tackles for loss in the setback against West Rowan and four more TFLs in a frustrating loss to Lexington. He had an interception against Carson when North finally claimed its first victory.

Goodine’s preparation for this football season was not his standard rehearsal. Mostly, he played baseball for the Rowan County American Legion team, and he showed enough bat speed and running speed at Newman Park that he was offered a scholarship by Catawba. It’s difficult to play two sports at the college level because there are so many off-season workouts, but Goodine might be a rare exception. Goodine said that’s something that is being discussed.

“I did miss a lot of North football things this summer because of baseball,” Goodine said. “I missed all the 7-on-7 stuff and I only got to play in one scrimmage.”

Goodine had a 26-tackle game against West Montgomery last season that remains his personal record. He goes into every game with the goal of topping 26 tackles, as unlikely as that sounds, and he knew East presented an opportunity.

“We knew East was a run-heavy team that would give me a lot of chances to make tackles if I flew to the ball,” Goodine said. “And I watched so much film of East that I almost always knew what play was coming and where it was coming.”

Goodine was in the right place at the right time a lot, but East’s defense was dominating North’s offense so thoroughly and for so long that things appeared hopeless for the Cavaliers as the game moved into the fourth quarter.

“Our defense spent way too much time on the field,” Hampton said. “But they held up. They bent a lot, but they didn’t break much. They gave us a chance until our offense could make a few big plays. Jordan was tough as rocks out there and he has a nose for the ball. He’s everything you want a linebacker to be.”

Jaharion Graham blocked a field goal when East tried to expand its lead to 19-6. Moments later, Malcolm Wilson had a nice run, East donated multiple penalties, and a remarkable North comeback was officially under way.

North isn’t all that young, but it’s less experienced than people realize. There are some juniors and seniors out there who haven’t played a lot of varsity football.

Hampton said North has only seven starters who were in the lineup a year ago.

But the Cavaliers also have experienced studs such as Goodine, Graham, Turner and Zay Davis on defense. They were out there a long time on Friday, but maybe that wasn’t such a bad thing.

“We’d love to be 5-0 or 4-1 right now, but instead we’re 2-3 and we know we’ve got quite a few issues to address,” Hampton said. “Still, Friday’s win was huge for our kids. We’re heading into Yadkin Valley Conference play on an upswing.”