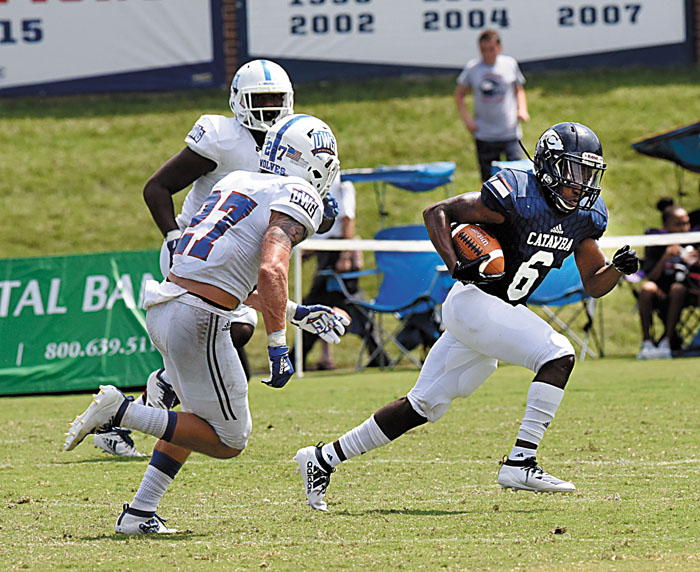 SALISBURY — Football coaching clichés are part of the lives of sports fans, from “one game at a time” to “we’re not where we need to be yet, but we’re getting closer” to “we have to focus on fundamentals” and “we didn’t make enough plays to win.”

The one that’s rising up the cliché chart with the speed of Alvin Kamara is “next man up.”

But the thing is, “next man up” has become a new-kid-on-the-block cliché, just like all those other time-tested clichés, because, well … there’s something to it.

When Catawba QB Reid Carlton got hurt last year, Ken Avent III got a chance to take over at quarterback, and performed admirably in the “next man up” role. “When Avent III went down shortly before Catawba’s 2019 opener, Kendall Davis was “next man up,” and for a sophomore starting his first three college games, he’s been pretty good.

While most fans are aware of Catawba’s quarterback situation (Avent is day-to-day again this week), “next man up” also applies to the receivers to whom Davis is throwing the ball.

Will Sweeper was a spectacular  receiver in 2018, a preseason All-South Atlantic Conference pick, and has barely played. He sometimes commanded double coverage, so it’s made it more challenging for Catawba to move the ball. There also was hope for a breakout from explosive Mallard Creek product Lovelle Williams, but he was injured in the opener.

Sweeper and Williams remain day-to-day, and yes, “day-to-day” has become another reliable cliché. Sweeper and Williams have combined for one catch for 3 yards. The revised receiving crew is now led by Thomas, who has 10 catches for 198 yards. He reeled in TD passes in the losses to West Georgia and UNC Pembroke. He didn’t score against Winston-Salem State, but he had a 41-yard reception. He’s a big play waiting to happen.

Thomas’ first name gets mis-pronounced about 99 percent of the time. He’s been called Shy-lon or Chi-lon or Sigh-lon, but it’s actually Ky-lon (rhymes with pylon).

“Just think about it like Christmas — that kind of C,” Thomas said, cheerfully.

He’s been an early Christmas present for the Indians.

“He was recruited for the slot and he’s starting to look really comfortable there,” Catawba head coach Curtis Walker said. “Some of our top receivers have been hurt, so he’s moved up. He’s emerged for us and is starting to put some good things in place. If he’s got something to work on, it’s being more disciplined in his routes.”

Despite his appearances on All-State lists in high school and taking home an MVP award for the 2018 Blue-Grey All-American Bowl in Atlanta where he produced a 62-yard touchdown catch and  a 51-yard TD run against a lot of D-I recruits, Thomas ended up in the Division II ranks.

“I’m from the Columbia, S.C., area and played at a new high school called Gray Collegiate Academy, and I think that’s why I was under the radar for most schools,” Thomas said. ” There was interest, but my only scholarship offers were from Catawba and St. Andrews.”

Catawba offensive line coach and run game coordinator Nygel Pearson handled the recruiting of Thomas. While Thomas isn’t tall (5-9, 175), he’s a blur and is proving to be an excellent slot receiver. His speed is special and will create mismatches. He’s a legit 4.4 guy, and there aren’t many of those.  He’s not afraid to run the ball on jet sweeps, and he’s strong for his size.

“No,  he’s not big, but he’ll hit you,” said fellow receiver Roman White. “Chylon is a pure athlete. I know when I came in here I was shocked by some of the things that he could do. And he takes what he learns into practice into the games.”

In prep track and field competition as a senior in the spring of 2018, Thomas dashed 100 meters in 10.67 seconds. That’s strong. He ran the 200 meters in 22.06. To put those numbers in perspective, 11 flat and 22.25 were winning time in the Rowan County Championships last spring, and Rowan had several standout sprinters.

Thomas got on the field quite a bit as a true freshman last fall. He contributed quite a bit. He played in nine games and had 11 catches for 109 yards. He scored his first college touchdown in the fourth quarter of the tight game Catawba lost at Mars Hill.

“I just came in last year and put in the work,” Thomas said. “I’ve got a good connection with our quarterbacks and they trust me enough to throw it to me. I’ve been able to make some plays.”

Thomas said the teammate he’s learned the most from is Sweeper. Their South Carolina high schools were about 15 minutes apart.

“Will is sure-handed and he’s very good with his routes,” Thomas said. “He’s from the same area as me and we hit it off. He’s shared a lot.”

On Thomas’ TD against UNC Pembroke, a 5-yard corner route, he was covered by a linebacker. That’s the sort of mismatch Catawba (1-2) hopes to exploit in the future with Thomas as one of the inside receivers.

“I knew it was coming to me as soon as I saw the defense,” Thomas said.

Even when Catawba gets back to full strength at receiver (Walker is knocking on wood), there’s not much doubt Thomas is going to be a factor for years to come.

He said it with a smile.