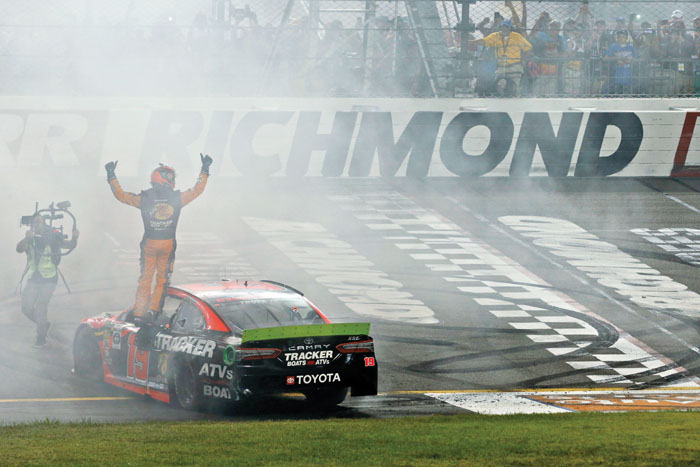 By HANK KURZ Jr. AP Sports Writer
RICHMOND, Va. (AP) — Martin Truex Jr. seemed to have a ‘pinch me’ moment as he climbed from his car in Victory Lane.
Nudged off the lead with 87 laps to go, Truex rallied Saturday night, ultimately passing teammate Kyle Busch with 25 laps to go and winning his second consecutive NASCAR Cup Series race. That it came in the series’ playoffs, it seemed, made it all the more surreal.
“To spin and win is pretty incredible. I’ve never done anything like that in my life,” Truex said. “When things are rolling, they just are.”
The victory completed a redemptive finish for Truex, the championship leader coming into the race. The bump from Ricky Stenhouse, who was running on fresher tires, seemed inadvertent, and came in Turn Four, but Truex was still running third when the caution flew.
He gradually reeled in his teammate, got a nudge from Busch as he passed and pulled away.
“I think any time you’re winning at this level, there’s a little bit of a pinch me feeling,” Truex said. “Look, this is really, really difficult. These races are hard to win. … You’ve got to have some things go your ways sometimes and we’ve certainly had that the last two weeks.”
The victory was his series-high sixth of the season and the 15th in 28 races for the Gibbs cars. They also finished in the top four spots, a first for the company, with Busch hanging on for second followed by teammates Denny Hamlin and Erik Jones.
“We led a lot of laps. We were up front a lot. But when I was out front, he could keep the closest distance to me,” Busch said of Truex. “That kind of worried me for a finish like that in the long run.”
Pole-sitter Brad Keselowski was fifth.
“We just weren’t quite as fast as the Gibbs cars,” Keselowski said, especially on long green-flag runs.
Truex swept the season at Richmond, where his victory in April was his first in 81 career starts on a short track.
Kevin Harvick and Busch, meanwhile, assured themselves of spots in the second stage of the playoffs, which begins after next week.
Hamlin said he was not at all surprised by his team’s domination.
“I think I knew that’s who we were going to be racing when it was all said and done,” he said. “The 19 just had such a strong car here on the long run over the last few years, we knew that was going to be the one to beat. … Great team day overall. Great points day for us.”
WHO’S HOT, WHO’S NOT
Hot: Truex, the Gibbs teams, and Ryan Newman, who squeaked into the playoffs and finished sixth.
Also, while still running up front, Kyle Busch has now gone 14 races since his last victory on June 2 at Pocono.
Not: Hendrick Motorsports teammates William Byron and Alex Bowman.
Byron started the night ninth in points but finished 25th. Bowman started the night 11th in points and finished 24th.
BETTER COACH OR OWNER?
Joe Gibbs won three Super Bowls as coach of the Washington Redskins, and NASCAR teams have won four driver championships.
He’s not inclined to say which career has been more successful.
“Let me say this: Over here, I don’t do anything,” he said, laughing. ‘In football, at least I could scream at people and everything.”
UP NEXT
The series moves to perhaps the trickiest race of the playoffs at the roval at Charlotte.
___
More AP auto racing: https://apnews.com/apf-AutoRacing and https://twitter.com/AP_Sports

College football: Catawba falls to 1-2 with loss at…