‘New future for us’: Downtown Kannapolis streetscape project to be complete in October 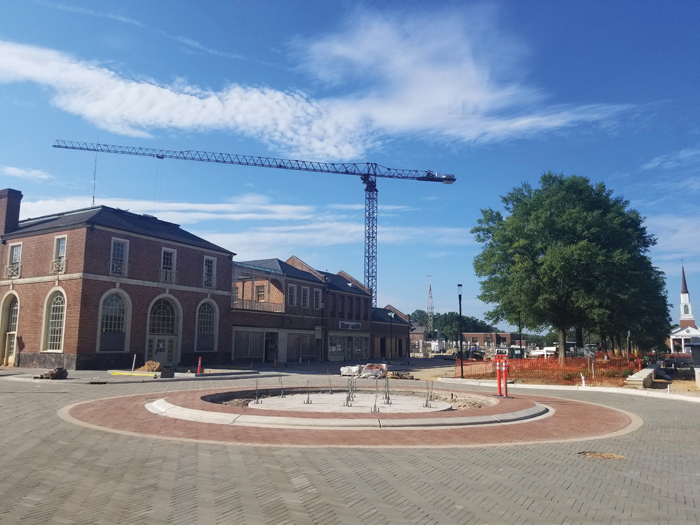 Finishing touches are underway on the West Avenue Streetscape in downtown Kannapolis. The city will celebration on Oct. 10.

KANNAPOLIS — Anticipation will turn to excitement for Kannapolis as the West Avenue streetscape project is completed next month.

The project is the first of several in the works.

On Oct. 10, the city will celebrate with a ceremony and the Downtown Runaround, a walk and run. On Oct. 23, the Kannapolis Intimidators minor league baseball team will reveal its new name and mascot at the Gem Theatre. And Old Armor Beer Co., the first business that’s part of the city’s downtown revitalization, will open on West Avenue in October.

Under the streets is new infrastructure to keep up with the new businesses coming to downtown, as well as the sports and entertainment venue where the baseball team will play and a mixed-use district.

Mayor Darrell Hinnant said he has been on site almost every day and sees progress daily.

“It’s happening so fast,” Hinnant said. “I can still see things that I didn’t see before.”

Hinnant sees the completion of the streetscape project as the first domino among future projects to be completed.

Hinnant said city officials continue to talk with investors and developers who are interested in coming to downtown Kannapolis. On Monday, Hinnant and other City Council members will go into closed session for two hours to discuss economic development opportunities.

Hinnant painted a picture of what downtown Kannapolis will be in 15 to 18 months. With a four-story apartment building set to open and townhouses to follow, 1,000 people will be added there every day, he said. The ballpark opening and Gem Theatre improvements are expected to bring even more people downtown.

The mayor said it’s “a new future for us in Kannapolis.”

Hinnant commended local residents who have been patient waiting for the transformation of downtown. He said in many conversations with older residents, they say they never thought they would live long enough to see a new downtown.

“It’s going to happen in your lifetime,” he says. “It’s happening right now.”

He said it is also for the next generations to be able to live, work, play and worship downtown.

Hinnant is thankful for the opportunities Kannapolis has but says economic development didn’t come with luck.

“We’re acting boldly to make it happen. It looks like everything is going Kannapolis’ way. I would say it’s really because we spent the last five years at work.”

The new ballpark is on the former property of Cannon Mills, which is a significant piece of Kannapolis’ history.

The Gem Theatre was recently added to the National Register of Historic Places. The theater opened in 1936 and was destroyed by fire in 1942, then rebuilt in 1948.

“We are appreciative of the community saying we want to move forward,” he said, adding residents have an appreciation of the past but don’t want to languish.

The West Avenue streetscape and park opening celebration will be from 5:30 to 8 p.m. Oct. 10 at the intersection of West Avenue and Laureate Way. The Downtown Runaround is the same day at 6 p.m. To register for the run/walk, visit runkannapolis.com.