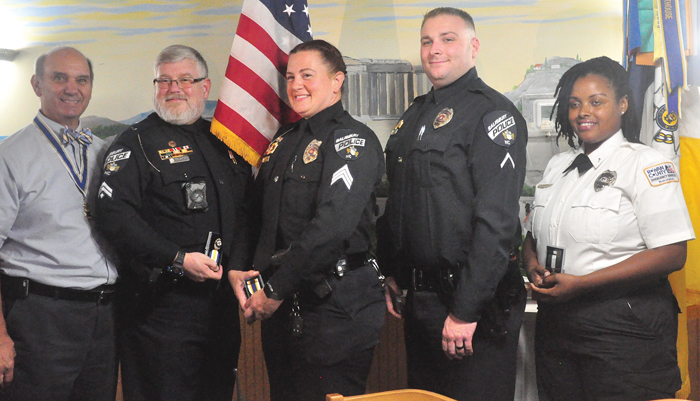 SALISBURY — The Salisbury Chapter of the N.C. Sons of the American Revolution honored five public servants for meritorious service to the community at a recent chapter meeting.

Master Police Officer Christopher Schenk received the Law Enforcement Commendation medal for his action in pursuit of a bank robbery suspect in 2018. The pursuit ended in Thomasville, where the suspect stabbed a store owner in an attempt to enter the store. Schenk shot the suspect to protect customers in the store as well as himself and other officers.

Detective Jay Basinger also received the Law Enforcement Commendation medal for his response to a bank robbery and car hijacking and a subsequent car chase in 2017.

Sgt. Jennifer Moreau received the Heroism Medal for her actions to stop an attempted robbery at a local store. She stepped out from behind cover to distract the robber, who was holding hostages, so other officers could get into position to apprehend the suspect.

All three officers are with the Salisbury Police Department. 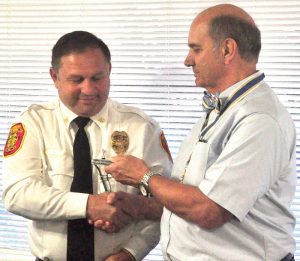 The chapter presented the Fire Safety Commendation medal to Salisbury Fire Department Division Chief David Morris. Morris was recognized for 27 years of service to the department and his role helping build the fire protection technology program at Rowan-Cabarrus Community College. He has assisted with the training of fire officers from across the state during his career. He is also an instructor in the Chaplain 101 program that trains fire service chaplains.

Lt. Renoda Burns of Rowan County Emergency Medical Services received the EMS Commendation medal recognizing her 12 years with Rowan EMS. She was promoted to lieutenant in 2018 and has responded to countless calls and touched many lives, saving some. Once while off duty and watching her son play in a basketball camp game, another player suffered cardiac problems. She began lifesaving measures and revived the young man, who was 16 at the time. He continues to play sports today.

Recognition certificates for the patriotic display of the U.S. flag were presented to the Salisbury Police Department, Salisbury Fire Department Stations 2, 3, 4 and 5, and Blue Bay Restaurant on East Innes Street.