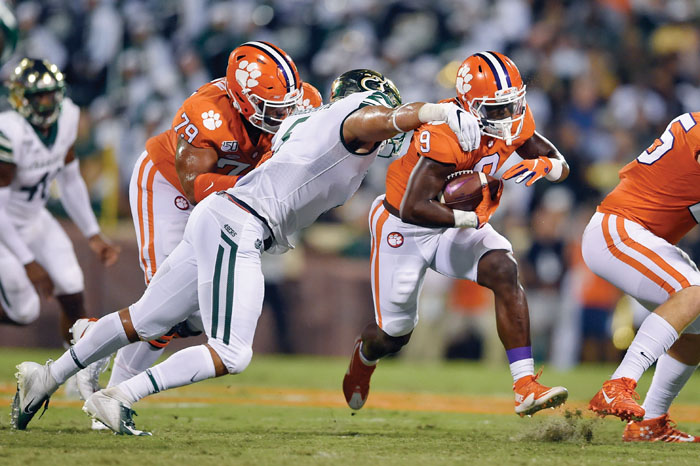 Clemson's Travis Etienne, right, rushes out of the tackle of Charlotte's Alex Highsmith, with blocking help from Jackson Carman (79) during the first half of an NCAA college football game Saturday, Sept. 21, 2019, in Clemson, S.C. (AP Photo/Richard Shiro)

Lawrence and the Tigers (4-0) put the first matchup between the two teams away in a hurry. Lawrence threw a 58-yard touchdown toss to Tee Higgins and K’Von Wallace scored on a 66-yard interception return to give Clemson a 14-0 lead in the first five minutes Lawrence came out of the game after throwing a 3-yard touchdown pass to Cornell Powell on the first play of the second quarter.

Charlotte (2-2), which had been averaging 47 points a game, had no chance to rally against Clemson’s defense.

The 49ers were stuffed on a fourth-and-short on their 48 at one point. When they got inside the Clemson 10, the Tigers rallied to hold them to their only first-half points on Jonathan Cruz’s 24-yard field goal. Clemson already led 31-0 by that point.

Clemson extended its program record for consecutive wins after breaking the old mark a week ago at Syracuse.

The most exciting moments may been at halftime when a fake Clemson team ran down the hill –  copying Clemson’s traditional entrance – to the crowd’s cheers as part of a movie based on ex-Tigers player Ray Ray McElrathbey, who took in and raised his younger brother Fahmarr while on scholarship.

The second half could have used a little movie magic to spice things up.

This marks the fifth straight season the Tigers have opened 4-0.

Lawrence went 7 of 9 for 94 yards before spending the final three quarters watching his teammates complete the blowout.

Charlotte, which revived football in 2013, fell to 0-5 against Power Five opponents and 0-3 against ranked teams. That count doesn’t include a 73-0 defeat by Clemson’s “B “ team in 1948. Charlotte shut down its football program after that 1948 season before playing again in 2013.

Tailback Benny LeMay ran for 81 of Charlotte’s 153 yards against a Clemson defense that had yielded just 75 yards rushing per game this season. The 49ers’ lone touchdown came after a muffed punt by Will Swinney, the son of Tigers coach Dabo Swinney, deep in Clemson territory. Charlotte quarterback Chris Reynolds ended the series with an 8-yard touchdown run in the third quarter.

Charlotte: The 49ers have posted some strong numbers on offense that could keep them competitive in Conference USA play.

Clemson: The Tigers did what they were supposed to against Charlotte. You can bet, though, that the coaching staff will seize on every mistake or missed assignment this week as Clemson prepares to get back to ACC play.