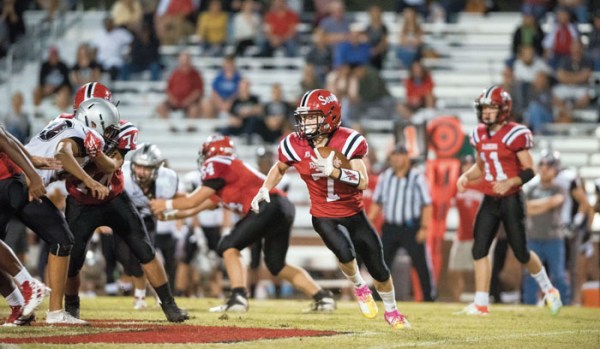 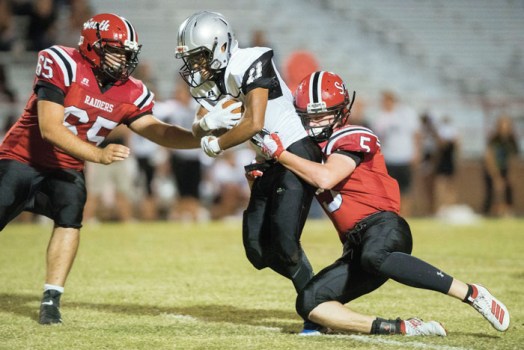 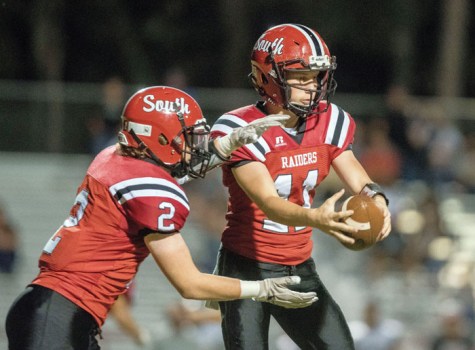 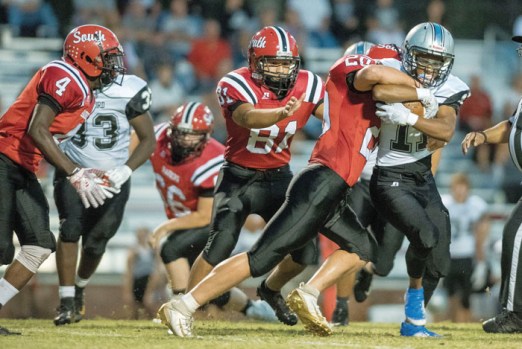 JON C. LAKEY/SALISBURY POST FILE PHOTO South Rowan's Gabe Pozyck (20) has the speed to often be the first defender to get to the ball for the Raiders. 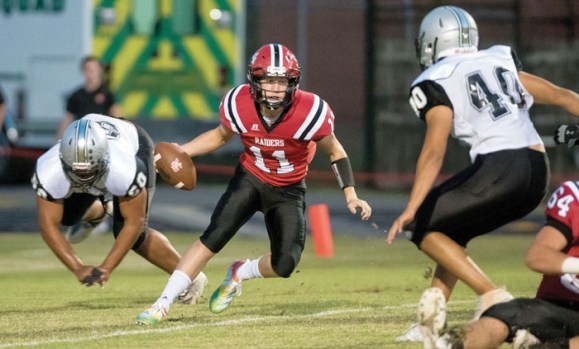 LANDIS — Most football games are won in the trenches and Ledford High proved that point emphatically Friday night at South Rowan’s Donnell Stadium.

The visiting Panthers’ defensive front overwhelmed the Raiders most of the night and spoiled South’s homecoming, 42-14. Ledford harassed South quarterback Drew Huffman from start to finish to the tune of seven sacks and minus 44 yards rushing. The Raider offense suffered a total of 12 tackles for loss and in the first half alone managed just one first down and minus nine yards in total offense.

Ledford’s offense was equally efficient as well in the game, led by quarterback Walker Lackey who was making his second straight start under center. Lackey ran for two touchdowns and passed for another in posting 77 yards rushing and 77 more through the air. “Ledford has a great team and are very well coached,” Yow said. “Their kids played some great football tonight.

The Raiders hurt themselves in the early going with some costly penalties and poor punts, resulting in awful field position. Ledford started their first possession at the South 37 and scored four plays later on a Lackey keeper from five yards out. The Raiders started their next drive at their own 17 then two straight sacks of Huffman pushed them back to the 9. A short punt set the Panthers up at South’s 24. Despite a couple of penalties, Ledford made the score 13-0 on a two-yard dive by Christian Franklin.

As the first period ended, the South defense stalled another Panther drive at the 35 on 4th and 12. But Lackey threw a screen pass to speedy runner Jaden Antone who juked his way through the defense for a 35-yard touchdown to open the second quarter. It was a backbreaking type of play. Yet another short punt late in the second quarter started Ledford at the Raider 38. Three straight runs by Antone capped the drive to make the halftime score 26-0.

To South’s credit, the second half started with some strong defense and some positive yards on offense behind Huffman, slot receiver Nathan Chrismon and runner Brayden Garrett. The Raiders pushed to the Ledford 20 in the third period but a field goal try came up short.

But South did strike on their next possession as Garrett broke free for 27 yards to the 18 to set the stage for an unusual but electric scoring play. Huffman for found Chrismon over the middle inside the 10 but the ball popped loose at the five as he was tackled. South’s Logan Perry was Johnny-on-the-spot, however, scooping up the ball at the 3 and trotting into the end zone to make it 26-6.

“That was really frustrating for me,” said Chrismon of the fumble, “but I am happy for my teammate (Perry) because he really deserved it.” Chrismon noted that the Raiders made some adjustments at halftime that helped the offense be more productive after intermission. “You dig a hole like we did,” he said, “but we came out and fought and competed. That’s all you can do.”

Ledford responded to the touchdown with another of its own. Antone broke the ensuing kickoff 52 yards to the South 32 and it took just five plays to make the score 33-6. Lackey capped the drive with a three-yard keeper. Disaster struck South on the next series as they punted from their own end zone and the snap went over Jackson Deal’s head. Deal picked it up and ran out of the back of the end zone for safety to make it 35-6 with 8:36 left to play.

Following the free kick, Ledford drove 40 yards in seven plays with reserve quarterback Nathan Carr scoring from the four to make the margin 42-6.

The Raiders had one more spectacular play up their collective sleeves, however, as bruising runner Darrion Cuthbertson rumbled 35 yards to the Ledford 45. On the next play Huffman threw a long bomb to Chrismon battling a single defender at the goal line. Chrismon won the battle and came down with the ball at the one. Garrett punched it in on the next play for the score. On the PAT attempt, holder Chrismon scooped up a bad snap and ran into the end zone for the two-point conversion and the final 42-14 score. Huffman, the county’s total offense leader, finished with 127 yards passing.

‘I always tell our players to be relentless and play until the very end,” Yow said. “If you fight until the whistle blows, good things will happen.”

The Raiders will return home next Friday to continue conference play against North Davidson. Ledford will travel to Thomasville.