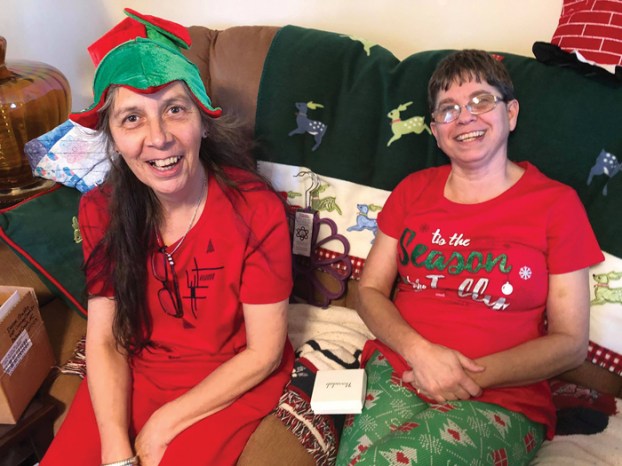 Laura Medford, left, and Cindy Webb share a moment when celebrating Christmas last year. Medford and Webb are good friends, both worked at Partners in Learning and have leaned on one another during their bouts with cancer. Submitted photo

Quotes of the Week: ‘God is going to tell me when it’s up’

“We must teach our children global empathy, and we are telling our kids that the world is much bigger than Rowan County.” — Marvin Moore, principal of Isenberg Elementary School, on the dual-language immersion program that has kindergartners alternating their days in both English- and Spanish-speaking classrooms

“I’ve got to go to work every day, just keep grinding it out every day.”

— Dominic Burnam, an unheralded freshman receiver for the Catawba College football team who caught a touchdown pass in a 21-14 win at Winston-Salem State last Saturday

“Everybody here as a right to be extremely upset with what happened. I can guarantee that nobody is more upset than I am.”

— Roger Hosey, town manager of Landis, who was the subject of questions raised by the state Local Government Commission about why he holds multiple leadership positions — including interim finance officer and assistant police chief — as the SBI continues its investigation of possible embezzlement by former town officials

“The hope is you open this model up. … We need our schools to be innovators.”

— Lt. Gov. Dan Forest, who visited two Rowan-Salisbury schools Tuesday to learn more about how the district is implementing changes to curriculum, calendar and staffing under the “renewal” status approved by the state

“They say it’s incurable, but God is going to tell me when it’s up, not this cancer.”

— Cindy Webb of Woodleaf, who has found one-on-one support from a friend and former co-worker, Laura Medford of Davie County, as both women battle cancer with positive attitudes

Whatever the decision, Rowan County commissioners can’t be accused of not questioning all aspects of a 400-acre solar farm proposal... read more