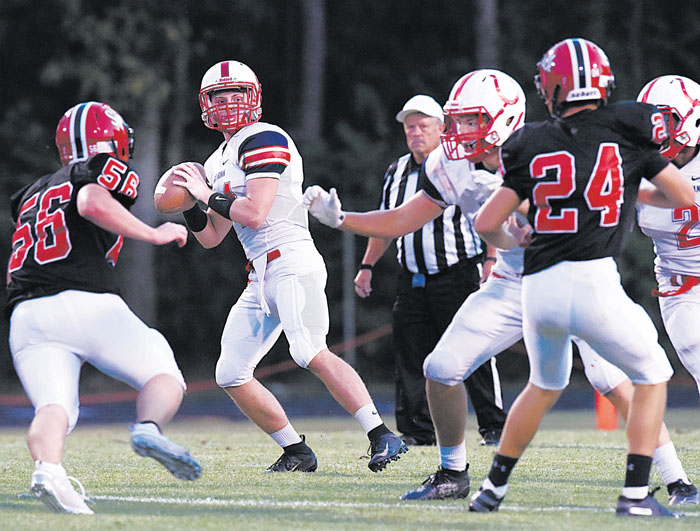 SALISBURY — The original “Rocky,” which has had more sequels than I can keep track of, appeared in theaters in 1976.

That was 43 years ago, a scary reminder of how quickly time flies.

Everyone has a favorite scene. Mine is different from most. I like the part where Rocky is training in a meat locker, punching frozen slabs of beef. There’s a reporter on hand for this unusual training session, so it’s on TV at Apollo Creed’s headquarters. Apollo is busy working on business deals with his financial advisors, but his trainer is watching Rocky intently, his eyes growing larger as his head moves closer to the screen. The trainer hollers something like, “Uh, Champ, you might want to watch this guy you’re fighting. Looks like he means business.”

The point of this Rocky flashback is that when West Davidson coaches watched Salisbury’s defense on their screen this week, they saw something as scary as Rocky punching slabs of beef. They saw a defense that means business.

Whether Salisbury can win its first Central Carolina Conference championship since 2012 and whether Salisbury can win its first playoff game since 2014 is going to depend on how much the offense can improve, but I have no doubts about the Hornets’ defense, which has yet to be scored upon. This is a championship defense. It’s the reason why the Hornets are the Rowan team with the best shot at a memorable season.

Last Friday was a fine one for county football, with West, South and 10th-ranked Salisbury beating teams from outside Rowan. North, was a fourth winner, easily handling county opponent Carson. East had the week off.

And, predictably, some strange things happened.

North’s No. 13 Jyrik Scott picked off a Carson pass.

South Rowan getting a kickoff return touchdown from a sophomore (Nathan Chrismon), recording its first defensive shutout in 10 years and logging its most lopsided victory in 10 years topped the list of unusual occurrences.

South ending its shutout drought —it was, by far, the longest in school history — got me looking up stuff about zeroes.

South once was the king of zeroes. From 1961-64, a span of 40 games, South played 30 games in which South, South’s opponent, or both teams, went scoreless. A tie was still a possible result in those days, but now we have overtime. The last recorded tie in South history was 7-7 against West Rowan on opening night in 1980.

As far as the rest of the county, well, Salisbury posts a weekly shutout. North shut out six opponents in 2018. East pitched three shutouts last season (that doesn’t count the ones at Staton Field). West shut out North this season.

That leaves Carson, and the Cougars, as you might have guessed, are working on quite a streak. They’ve gone 102 games without shutting an opponent out. The last time they put up a zero was a 49-0 mauling of East Rowan in 2010.

A.L. Brown’s most recent shutout was against Hopewell to start the 2018 season.

Offensive-minded Davie is in a mini-drought as far as defensive shutouts. The War Eagles have played 30 games since they blanked Parkland in 2016.

So whose gets a shutout tonight?

I’d bet on the Hornets as the most likely to succeed, even though West Davidson is averaging 22 points per game.

As far as the picks last week, I was personally worse than a coin flip, correctly picking just two of five on Friday, the 13th. Marny Hendrick and Scott Maddox, local sports experts who also offer weekly picks, weren’t outstanding, but they were 3-2, better than a coin flip. The difference was they had more faith in South Rowan than I did. Since the picks began — there were no picks in the weather-plagued opening week — all three of us are 6-3.

West Davidson wants to run the ball, which is not easily done against Salisbury.

According to the “Massey Ratings” statistical analysis, Salisbury is a 24-point favorite with a 90 percent win probability.

I’d make it about 98 percent, but having said that, a lot of us remember when West Davidson won three straight (2005-07) against very good Joe Pinyan-coached Salisbury teams.

Salisbury leads the series 15-3 and has won the last 11 meetings. The Hornets walloped the Green Dragons 48-18 in the 2018 game in which Cameron Gill made himself famous.

This isn’t last year’s Ledford, but it’s still Ledford, and the Panthers should have enough to survive their trip to South.

Ledford is favored by 29 points. Still, it should be a lot more interesting than last year’s meeting when Ledford won 50-0.

Ledford has lost to 4A Glenn and to undefeated Randleman.

The only Norths that Carson has ever played are North Rowan and North Iredell, and, for what it’s worth, the Cougars have gone 11-11 against those Norths.

North Stanly is in a major rebuilding mode after losing a plethora of studs. The Comets fell to East Rowan on opening night and have been shut out the past two weeks.

This is one of those games Carson has a realistic chance to win, so  the Cougars, who have lost three straight since beating South Rowan, need to take advantage of the opportunity.

The Massey Ratings favor North Stanly by 11 and give the Comets a 70 percent win probability, but Carson is running the ball pretty well and has a decent chance to pull this one out in New London.

South Iredell’s only win came against West Iredell, and the Vikings do not appear to be as stout as they were last year. They’ve been outscored by 58 points so far.

In other words, Davie should be able to bounce back from the loss at West Rowan. Davie is just outside the state’s top 50, according to MaxPreps.

The Massey Ratings have Davie as a 13-point favorite with a 73 percent win probability. Of course, Davie was a 14-point favorite last week. Unexpected things can happen when you’re trying to predict the actions of  high school kids.

Still, the history is so one-sided, it’s worth mentioning. A.L. Brown is 16-1 against West. West’s current players hadn’t been born yet the last time — and only time — the Falcons beat the Wonders in 2000. That was the year West (which beat Concord the week after it beat A.L. Brown) won the first conference title in school history under coach Scott Young.

A.L. Brown has won the last seven meetings and rolled against the Falcons 31-7 and 42-13 the last two seasons. All-time, West has been outscored in the series 555-198.

Based on last week’s results — West knocked off Davie; A.L. Brown was spanked by Mooresville — West has a very good chance to win this game at home. A.L. Brown, which has played only two games, has been plagued by penalties and turnovers and is still figuring things out offensively.

The Massey Ratings are based on math but must believe in history. They favor the Wonders by a touchdown, with a 62 percent win probability.

Another game where the history of the series is dramatically one-sided.

North Rowan faced West Rowan and Salisbury early and played Lexington short-handed, which helps explain a 1-3 record. North appeared to get back on track in a lot of areas last week in a romp against Carson.

Both teams have an outstanding running back. North’s Malcolm Wilson is the county’s reigning offensive player of the year, while East’s Sammy Pinckney is the county rushing leader.

North has an excellent defense, while East, which has had two weeks to prepare for this game, has a strong offensive line. That’s probably the battle that will tell the tale.

The Massey Ratings give East Rowan a 79 percent win probability and favor the Mustangs by 15 points.