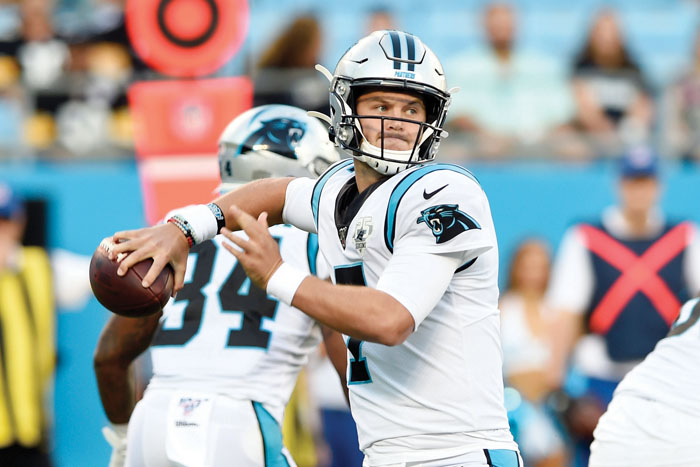 FILE - In this Aug. 29, 2019, file photo, Carolina Panthers quarterback Kyle Allen (7) passes against the Pittsburgh Steelers during the first half of an NFL preseason football game in Charlotte, N.C. With Cam Newton reaggravating his foot, the team is looking at the possibility of starting Kyle Allen on Sunday against Arizona, the first of four road games in the next five. Allen has just one career start. (AP Photo/Mike McCarn, File)

But teammates say Allen does have the confidence to be a successful NFL quarterback. And the Panthers, mired in an 0-2 hole to the start the season, will need Allen to have some success against the Arizona Cardinals if he is called on to start Sunday.

“We know he’s confident,” said Panthers running back Christian McCaffrey. “There’s a reason that we have him on our team and that is because we believe in him.”

Newton missed his third straight day of practice with a mid-foot sprain on Thursday, but coach Ron Rivera isn’t ready to name his starter.

Rivera grew tired of questions about Newton’s health and walked out of his news conference following repeated inquiries about the injured QB, saying, “I’m not going to do this anymore. I told you I won’t know anymore until tomorrow. … Golly.”

Teammates say Allen doesn’t talk nearly as much as Newton in the huddle, but that the second-year pro has a quiet confidence about him that puts others around him at ease.

Wide receiver D.J. Moore saw that last year when Allen stepped in to make his NFL start in Week 17 against a Saints team that had already qualified for the postseason. Allen helped Carolina snap a seven-game losing streak and end a disappointing season on a high note by combining for three touchdowns in a 33-14 win.

“He was confident and ready to play,” Moore said. “He knew the game plan and just went out and executed it. You saw what we did when he went in there.”

Added wide receiver Curtis Samuel, “We expect him to do the same thing this week.”

Moore said Allen has many of the same skills as Newton, then smiled and said, “Cam might be a little faster.”

Allen said his confidence mostly comes from the difficult rollercoaster ride he endured in college.

He was the No. 1 ranked QB in the nation in 2014 coming out of high school by all major recruiting publications. Almost every major college program wanted him, and Allen wound up signing with Texas A&M.

Arizona Cardinals coach Kliff Kingsbury was at Texas Tech at the time and said he tried to recruit Allen, too.

“He probably threw all our letters away and red-buttoned me every time I called him,” Kingsbury joked, “but I remember watching him. He was very, very talented. He played for one of my good friends there at Texas A&M (offensive coordinator Jake Spavital), and they speak very highly of him.”

But Allen’s career never took off in college, and he was benched for Kyler Murray his sophomore season at Texas A&M and later decided to transfer to Houston. He sat out a year there, but again struggled with consistency and had problems holding on to a starting job.

He declared early for the NFL draft in 2018 but went undrafted — a mighty fall for the once highly decorated high school QB.

The Panthers signed him as an undrafted rookie, but Allen didn’t make the 53-man roster. However, Carolina signed him to the practice and Allen eventually was added to the roster when Newton sat out the last two games of 2018 with a shoulder injury.

“You have those ups, you have those downs, and you learn a lot about yourself,” said Allen, who will make $495,000 this season; Newton signed a $103.8 million contract. “Through that crap I went through in college and even getting released last year, you build that resolve. That’s something I hold onto really tight.”

Allen has always been self-assured.

When he was younger his father befriended Hall of Fame quarterback Roger Staubach and persuaded him to send an autographed pictured to his son. Allen responded in kind.

“My cocky 10-year-old butt sent him a signed picture (of myself) back,” Allen said with a smile.