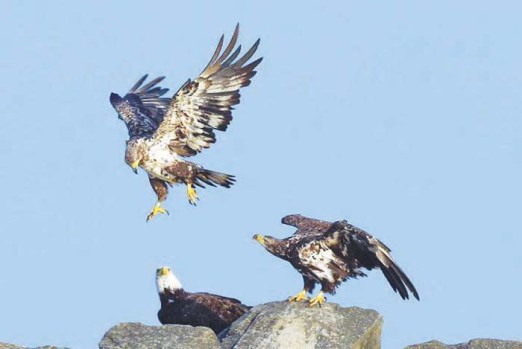 Submitted photo This photograph of Freedom, coming in for a landing, was taken in 2019 on the shores of Lake Erie near Conneaut, Ohio, where Freedom likes to spend his summers. Bald eagles don't usually have their distinctive white heads until they are about 5 years old. Freedom, hatched at Dan Nicholas Park in Rowan County, was 3 years old in this photo 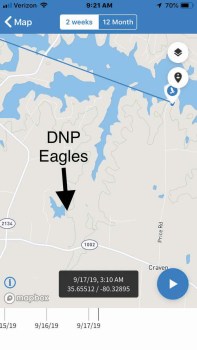 The big arrow on this maps shows the location of Dan Nicholas Park, where bald eagle Freedom's parents, Liberty and Justice, still reside. At top, the diagonal line going left to right to the eagle icon shows where Freedom's tracker pinpointed his location as of 3:10 a.m. Tuesday. It's on a finger of High Rock Lake near the end of Price Road and only a short distance from Freedom's birthplace, though he has traveled thousands of miles elsewhere since his release. 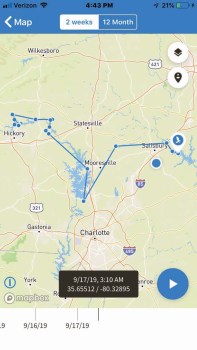 This screenshot of a tracking application shows Freedom's movements during a two-week period leading up to Tuesday, when he was in the High Rock Lake area at the end of Price Road. To the left, you can see he was near Hickory two weeks ago, then stayed a couple of days in the Lake Norman area before heading toward Rowan County. 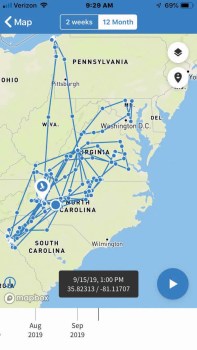 For close to three years, the LifeTrack Bald Eagle study has been tracking the movements of Freedom, a bald eagle that was born in captivity at Rowan County's Dan Nicholas Park in March 2016. Later that spring, Freedom was moved to the Carolina Raptor Center and eventually released into the wild, and this map shows much of the ground he has covered since his release.

SALISBURY — If bald eagles had a dating service, this might be a profile you’d see:

Favorite foods: Fish and other things I can scavenge.

Favorite song: “Desperado” by the Eagles.

Since his release June 24, 2016, from the Carolina Raptor Center in Huntersville, Freedom has traveled thousands of miles — as far north as Quebec, Canada, and as far south as Georgia.

Interestingly, Freedom touched down this past Tuesday morning on a finger of High Rock Lake, at the end of Price Road — only a couple of miles away from where he was hatched in captivity at Dan Nicholas Park.

A small fan club of Freedom’s, not the least of whom is Rowan County Animal Services Director Bob Pendergrass, has traced his movements through a transmitter attached to the bald eagle on his release.

Pendergrass, for one, follows the bird’s movements faithfully on the “Animal Tracker” application on his smartphone. You can check the app for Freedom’s movements over the past 12 months, or even the past 24 hours.

Part of that routine is to fly north in the warmer months at least as far as Lake Erie and spend much of his summers in Conneaut, Ohio. He has been photographed there hanging out on a seaway with other bald eagles, identifiable because of his leg band number.

Pendergrass says Freedom also frequents a place in western Virginia that has a huge landfill — a good food source. In addition, he notices that the eagle has flown to Lake Marie in South Carolina on occasion and likes to hunt the rivers and streams of mountainous regions.

His first summer in the wild, after hanging out in Mecklenburg County for several weeks, Freedom took wing to the north and traveled as far as Quebec.

“When he decided to leave, it was like he had a mission,” Pendergrass says, noting that within 48 hours that year he was in the Lake Erie area.

Freedom eventually flew to a remote area of Canada near Quebec, but he hasn’t exactly avoided urban areas altogether. Pendergrass says Freedom has flown over Washington — appropriate for a bald eagle — and skirted the western edge of Montreal.

Has he ever flown this close to his birthplace before? Pendergrass says he flew directly over Dan Nicholas Park last year.

But Pendergrass, who is a master falconer, says he has no idea whether it’s something instinctual or innate that has brought Freedom this close to home at times.

“Most of the thought process,” Pendergrass says, “is where he’s finding food.”

Pendergrass could be considered Freedom’s godfather. As former head of the Nature Center at Dan Nicholas Park, he commiserated for years with Liberty and Justice and their failed attempts to hatch an egg.

But the bald eagles finally had success in March 2016. After about a month, when their eaglet named Freedom was judged old enough, Pendergrass secured him from the parents’ nest and successfully moved him to the Carolina Raptor Center.

There, bald eagles Derek and Savannah became his foster parents, in a place out of the public’s view. That was the problem at Dan Nicholas Park’s Rowan Wild nature area: There would have been too much interaction with the public for Freedom to ever adequately adapt in the wild.

At Carolina Raptor Center, Derek and Savannah were sitting on infertile eggs, which were removed. Freedom was substituted in, as if they had hatched him.

The foster bald eagles had experience raising other eaglets, and they took to the job successfully. After additional weeks in their care, Freedom was moved to a “hack tower” (an eagle’s treehouse in the woods), as he began exercising his wings and learning to fly.

The hack tower served as his home base. Freedom learned to return there after flying because food was purposely placed in the tower for him. He gradually became more independent, learning to hunt on his own. One day, as hoped, he just left and didn’t return.

The transmitter put on Freedom is about half the size of a business card. Pendergrass says it’s solar-powered and relies on cell tower signals, not satellites. Freedom’s transmitter stopped working for periods of time this summer, and trackers would get un update only about every 10 days.

“Lately, it has come back on,” Pendergrass says, adding that some growth in Freedom’s feathers may have been to blame.

The transmitter represents a collaboration between Carolina Raptor Center and the N.C. Museum of Natural History, Pendergrass says.

Over the past two weeks, according to the tracking device, Freedom has been in the Hickory, Lake Norman and High Rock Lake areas.

Freedom is not yet old enough to have taken on the distinctive white feathers and crown associated with bald eagles. That will come when he’s about 5 years old and is sexually mature to boot.

“He will be looking for a mate then,” Pendergrass says, “and he could settle down.”

Younger eagles tend to be more migratory, as Freedom has demonstrated.

You can also track Freedom at www.carolinaraptorcenter.org/learn/eagle-tracking.

Now that Freedom is close to home for a bit, Pendergrass is checking up on his whereabouts daily. Meanwhile, Freedom’s been heard singing another Eagles’ song: