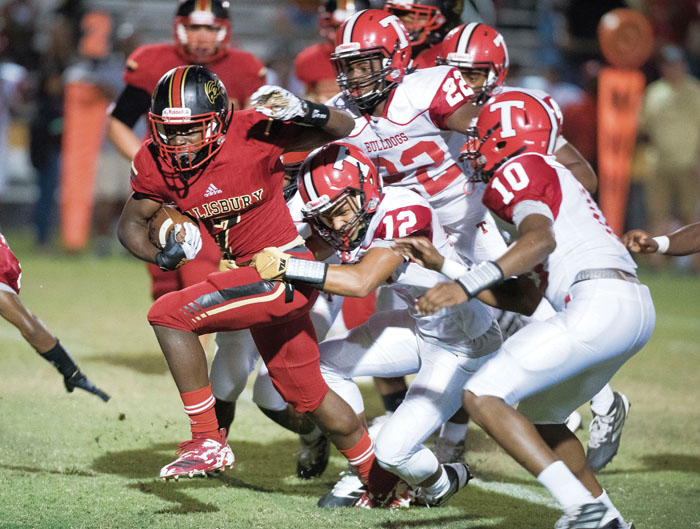 JON C. LAKEY FILE PHOTO/SALISBURY POST ... Salisbury’s Mike McLean (7) runs with the football, dragging Thomasville defenders behind him, during last week’s game at Ludwig Stadium. McLean rushed for 161 yards and a touchdown during the game, a 28-0 win for the Hornets.

SALISBURY — Cramps were a factor in limiting Salisbury back Mike McLean to 49 rushing yards on opening night, but in the Hornets’ two games since then, he’s piled up 321 yards on 44 smash-mouth carries.

“I’m always ready for a lot of carries,” McLean said. “That’s who we are on offense. We’re going to pound the ball downhill for a few yards at a time, and hopefully, I’ll be able to break some long ones, too. Our offensive line has improved. Those guys worked their tails off this summer, so I’m not surprised we’ve had success running the ball.”

McLean, a 175-pound junior, had 23 carries for 161 yards and a touchdown in Friday’s 28-0 Central Carolina Conference win against Thomasville.

The Hornets (3-0, 1-0) were playing without quarterback Vance Honeycutt, so Thomasville was able to bring numerous potential tacklers into the box, but the Hornets weren’t fazed.

They kept doing that they had to do and maintained control of the game. McLean broke slick runs of 38 and 22 yards and was stuffed for no gain by the aggressive Bulldogs only once. He never took a step back. Mostly, he banged out 4 yards here and 5 yards there. McLean almost always got a decent chunk of real estate on first down. Salisbury was rarely in an awkward down-and-distance where it was forced to throw.

“Calling plays really is a lot easier when it’s second-and-4 or second-and-5 all night,” Hinson said. “Mike is a good enough athlete that when he’s right, you can just hand it to him and let his ability and athleticism take over. It’s nice to have an athlete like that, someone who’s going to run it hard and someone who also can take the snaps, if needed, without missing a beat.”

McLean was a heralded athlete coming over from Knox Middle School three years ago. He had leadership qualities and a positive personality to go along with obvious athletic gifts.

As a varsity freshman, he took hard knocks, learned lessons under fire and had to make adjustments to bigger, faster defenders, but he survived. He rushed for 436 yards and seven touchdowns.

As a sophomore, he was asked to quarterback the Hornets, and while everyone, including McLean, agrees that running back is his natural position, he handled QB responsibilities well. He rushed for 832 yards and 14 TDs while throwing for 1,039 yards and six more scores. He rushed for a career-best 189 yards and two TDs late in the season against South Rowan.

As a junior, McLean has switched back to running back, although whether he can stay there or not will depend largely on Honeycutt’s health. The QB options in Honeycutt’s absence are star linebacker Jabril Norman, the leader of the defense, and McLean. Norman took most of the snaps on Friday, although McLean’s touchdown, a 13-yard improvisation in the second quarter, came when he was playing  quarterback.

“A pass play was called on that one, and I was supposed to throw it to Patrick Taylor, but then I saw the safety breaking to cover him,” McLean said. “I decided to keep it and run the other way, and I ended up scoring. That was the play that stood out for me on Friday.”

Assuming that he can stay healthy, McLean is on track for quite a high school career. He already has 286 carries for 1,638 yards and 24 rushing touchdowns.

Over the years, Salisbury has put together numerous outstanding teams, but it rarely has relied on a feature back. Carries have been split among multiple rushers, so the career mark is relatively modest compared to the school records at West Rowan, North Rowan and Carson. Dario Hamilton’s 3,553 yards from 2005-08 is the SHS standard.

McLean is almost halfway there, so he could have a shot.

“He runs with a good pad level and good force and will usually move the pile,” Hinson said. “He’s also a good leader. His attitude was tremendous on Friday, doing whatever we asked him to do. His leadership really started to come out.”

McLean, who is a cousin of North’s star back Malcolm Wilson Jr., says he is actually a little lighter now than when he was a freshman, but he’s also quicker.

He’s well aware of all the candidates for the county rushing title — himself, Wilson, East’s Sammy Pinckney, West bull Michael Gonsalves and Carson’s Hunter Courtney, who got a huge head start when he ran wild on opening night against South Rowan. It should be an exciting race.

Next for McLean and the Hornets is a trip to Tyro to play West Davidson on Friday. McLean has never had a great game against the Green Dragons, but he hopes to change that.