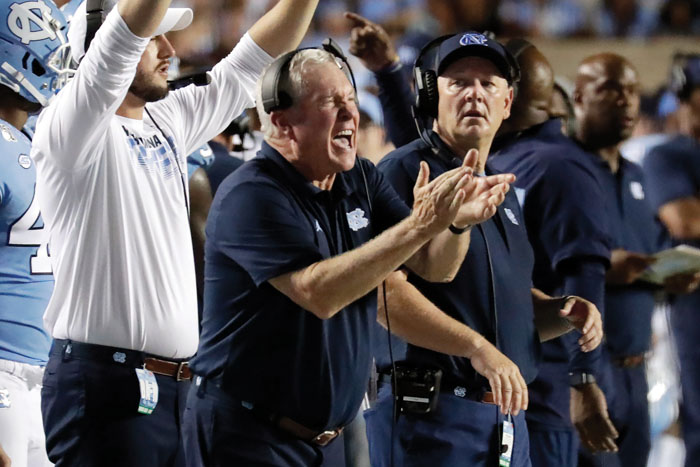 North Carolina coach Mack Brown says, ‘There won’t be much talk about this game publicly as there will be with the State game and the championship game, so we have to get our minds ready to go.’ (AP File Photo/Chris Seward)

Here are things to watch in the Atlantic Coast Conference in Week 4:

Appalachian State at North Carolina. This rarely played but intriguing instate matchup headlines a largely lopsided schedule that has four ACC teams favored by at least 19 points. Mack Brown has strong ties to both programs after starting his head coaching career with the Mountaineers in 1983. New Appalachian State coach Eliah Drinkwitz and defensive coordinator Ted Roof came to Boone after stints at North Carolina State and won in their last visit to Kenan Stadium last November. App State is winless against Power Five schools since its unforgettable upset of Michigan in 2007. This is the schools’ first meeting since 1940.

Ball State’s passing offense vs. North Carolina State’s defense. The Wolfpack (2-1) received a reality check last week after they were torched for 44 points and 445 total yards at West Virginia after not allowing a touchdown during the first two weeks. With the ACC opener against Florida State looming next week, North Carolina State must figure out a way to slow a Ball State passing game that ranks 11th in the nation, averaging 348 yards and throwing 11 total TDs in three games.

Wake Forest’s receivers keep filling the stat sheet. The Demon Deacons (3-0) have had one player with at least 158 yards receiving in every game this season, with Sage Surratt hitting that mark against Utah State in the opener before finishing with 169 yards against North Carolina. Scotty Washington had 158 yards receiving in Week 2 against Rice. Those two have combined to win three weekly player of the week awards from the conference. More big numbers could be on the horizon this week with Elon of the FCS visiting.

The only ACC team that’s an underdog this week is Louisville (plus-6½) at Florida State, and there’s reason to believe the Cardinals (2-1) can keep it close against a Seminoles team that has struggled in Willie Taggart’s second season. Florida State (1-2, 0-1) has allowed at least 31 points and 415 total yards in every game this season, and has been outscored 75-31 in its second halves and overtime. That’s encouraging for a Louisville team that has beaten two directional Kentucky schools by a combined 80-21 the past two weeks.

Look for AJ Dillon to put up more big numbers for Boston College. The tailback is coming off his first 100-yard performance of the season, a 151-yard night in a surprising home loss to Kansas. Next up for the Eagles (2-1) is a visit to former Big East rival Rutgers, which ranks 107th nationally against the run and is allowing an average of 188.5 yards.