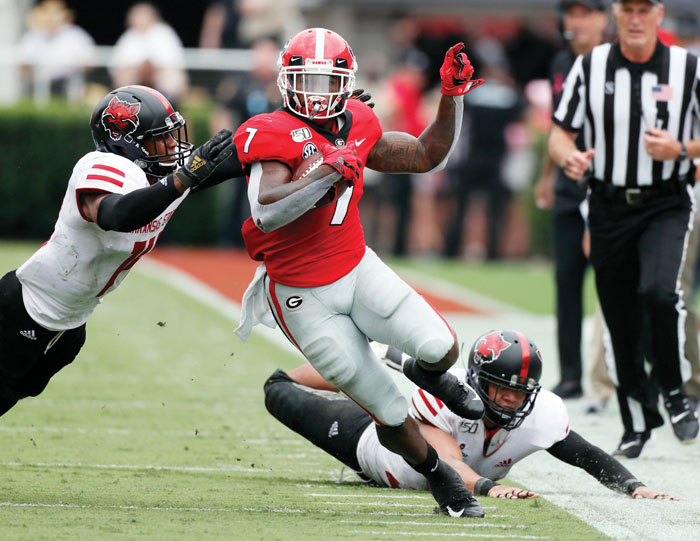 Georgia running back D'Andre Swift (7) turns the corner on a pass play which he broke for a touchdown during the first half of an NCAA college football game in Athens, Ga. (Bob Andres/Atlanta Journal-Constitution via AP)

Here are some things to watch during the fourth week of the Southeastern Conference football season.

No. 7 Notre Dame (2-0) at No. 3 Georgia (3-0): These two storied programs meet for only the third time ever Saturday at Sanford Stadium. Georgia capped its 1980 national championship season by defeating the Fighting Irish 17-10 in the Sugar Bowl and won a 20-19 nail-biter at Notre Dame in 2017. Georgia is a 14-point favorite and should have a matchup advantage whenever either team runs the ball. Georgia averages 7.6 yards per carry and allows just 2.1 yards per carry. Notre Dame is allowing 230.5 yards rushing per game and 5 yards per carry. The Irish are missing injured running back Jafar Armstrong and haven’t gotten much production from their other ball carriers.

MATCHUP OF THE WEEK

Auburn running back JaTarvious Whitlow vs. Texas A&M run defense: Whitlow is the SEC’s second-leading rusher – behind only Mississippi State’s Kylin Hill – and has gained 341 yards on 64 carries. His ability to find running room could prove critical when the eighth-ranked Tigers (3-0, 0-0 SEC) visit No. 17 Texas A&M (2-1, 0-0). The Aggies are allowing just 87.7 yards rushing per game to rank third in the SEC in run defense, and they’re yielding 3.4 yards per carry. Whitlow ran for just 16 yards on eight attempts against Texas A&M last year as the Aggies limited Auburn to 19 team rushing yards, though the Tigers still won the game 28-24.

The top three Football Bowl Subdivision quarterbacks in passing efficiency include two SEC players and one former SEC player. Oklahoma quarterback and Alabama transfer Jalen Hurts leads with a rating of 250.2. He’s followed by LSU’s Joe Burrow (223.9) and Alabama’s Tua Tagovailoa (213.4). … LSU’s Terrace Marshall Jr. has six touchdown catches to match Oklahoma State’s Tylan Wallace for the highest total of any FBS player. … No. 9 Florida has thrown for at least 300 yards in back-to-back games, giving the Gators multiple 300-yard passing performances in a season for the first time since 2014. Florida hasn’t produced as many as three 300-yard passing games in a season since 2009, Tim Tebow’s senior year. … Auburn had three 100-yard rushers last week in a 55-16 rout of Kent State: Whitlow (135), Joey Gatewood (102) and Shaun Shivers. That marked the first time Auburn had three 100-yard rushers in a game since 1983.

… Kentucky’s Max Duffy leads all FBS punters with an average of 51.2 yards per attempt. … Missouri has outscored opponents 51-0 in the first quarter.

California (3-0) is ranked 23rd and already has produced a road upset of No. 22 Washington back when the Huskies were ranked 14th. Yet the Golden Bears are two-point underdogs as they head east to face Mississippi (1-2), which has gone 7-8 since the start of the 2018 season.

Florida quarterback Kyle Trask hasn’t started a game since his freshman year at Manvel (Texas) High School, but he’s atop the Gators’ depth chart now that Feleipe Franks will miss the rest of the season with a dislocated and fractured right ankle. Trask, who backed up current Houston quarterback D’Eriq King in high school, took over for Franks and rallied Florida from a 21-10 deficit in a 29-21 victory at Kentucky last week. He will try to make sure Florida continues its recent superiority over Tennessee, which hasn’t beaten the Gators at Gainesville since 2003. Florida may use two quarterbacks with Emory Jones occasionally stepping in for Trask.