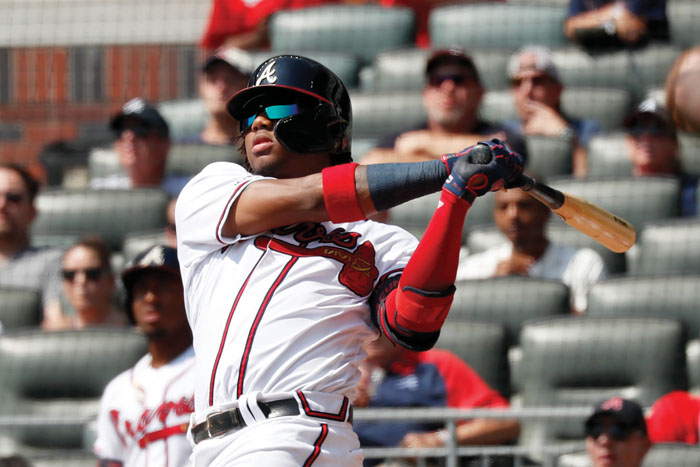 He’s even more thrilled about the chance to properly celebrate a division title.

Acuña became the second-youngest player in baseball history to hit 40 homers in a season, Freddie Freeman also drove in two runs and the Atlanta Braves clinched at least a tie for first place in the NL East with a 5-4 victory over the Philadelphia Phillies on Thursday.

With eight games left in the regular season, a second straight division title seems a formality for the Braves. They hold a 9 1/2-game lead over the Washington Nationals, who have played three fewer games and were off Thursday.

The Braves can officially let loose as soon as Friday with either a victory over the San Francisco Giants or if Washington loses at Miami.

This time around, Acuña can take part in a champagne toast.

He wasn’t yet of legal age when the Braves won the East a year ago.

“They wouldn’t let me drink because I was a minor,” Acuña recalled, breaking into a big mile. “This year, it’s going to be different. I’m looking forward to it.”

After winning the first two games of the series, Philadelphia’s postseason hopes took another blow. The Phillies came into the day trailing both Milwaukee and the Chicago Cubs by three games for the NL’s second wild-card spot.

Acuña’s historic homer came with a flourish. He launched a 432-foot drive into the second deck at SunTrust Park, standing at home plate to admire his shot off Aaron Nola before tossing the bat away and slowly rounding the bases.

Ott and Mathews are both members of the Baseball Hall of Fame.

“It feels incredible,” Acuña said. “To be compared to superstars and Hall of Famers like that, especially at such a young age, wow.”

The youngster had gone five games since hitting his 39th homer.

“He might relax now and really go off,” manager Brian Snitker said. “That’s an unbelievable accomplishment at this stage of his career.”

“Only four other players have achieved that with all the people who’ve played in the big leagues over the years,” Acuña said. “It would be amazing.”

After Acuña’s homer put the Braves ahead, Philadelphia pulled even in the fifth. Adam Haseley drove a run-scoring double to right off Mike Soroka, took third on Nola’s single and came in to score on César Hernández’s forceout.

But Freeman reclaimed the lead for Atlanta in the bottom half when Freeman ripped a one-out single to right off Nola (12-6) to bring home Matt Joyce and Acuña.

Joyce got the inning started with a pinch-hit single batting for Soroka (13-4), who was lifted after 88 pitches in one of his final tuneups for the postseason.

Nola worked five-plus innings. Philadelphia cut the lead to 4-3 in the sixth, but Austin Riley answered with his 18th homer of the season off the Phillies right-hander leading off the bottom half. Nola gave up nine hits, two hits and all five Atlanta runs.

Philadelphia loaded the bases with one out in the eighth off Shane Greene but only managed one run on Scott Kingery’s sacrifice fly.

Mark Melancon worked perfect ninth for his 11th save with Atlanta and 12th overall this season.

The Braves gave slugger Josh Donaldson gets his first day off since May 22.

He was joined on the bench by shortstop Dansby Swanson, who is hitting just .156 since returning from the injured list.

Riley’s homer was his first since Aug. 2, just before he went down with a knee injury that kept him out a month, and just his second in his past 27 games with the Braves.

Phillies: Head to Cleveland on Friday to begin a three-game series against the Indians, who are battling for an AL wild-card spot. LH Drew Smyly (4-6, 6.22 ERA) goes for Philadelphia against RH Shane Bieber (14-7, 3.26).

Braves: RH Mike Foltynewicz (7-5, 4.80) will try to wrap up the East for Atlanta when he opens a three-game series against San Francisco. The Giants counter with RH Tyler Beede (5-9, 5.02).